I was made a new superhero! 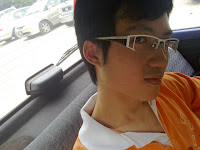 I was treated like a mini celebrity the other day when i went to have my glasses changed. It was a shop that i used to frequent since the day i first i got my glasses.
The mini celebrity treatment was not because i got any handsomer, scored a major goal for Manchester United against Liverpool or cured a major disease like AIDS though. It had to do with the the reason i was changing my glasses, not because i was changing  my glasses this time due to my increasing power of my eyes thanks to the limitless hours of gaming or because it was broke by a football flying towards my eyes.
You see, i had to change my glasses because the the rims or the temples part, the part of the spectacles where you put over the ears, was so badly corroded it was unwearable. You heard me right, it was corroded like how an acid corrodes a metal when it touches it. Just imagine parts of my glasses falling off.
According to the uncle optometrist working there, i was the first customer in so many years that managed to corrode the frames of my glasses til such a state that the colour and the plastic were all falling off.
"You must have very acidic sweat indeed", he said when i cannot come up with a plausible reason on how i managed to induce such a chemical corrosion on my glasses. Hair gels were out, as i am the guy who rarely styles his hair. Shampoo is out too, because you'll need the shampoo to stay on my head while wearing the glasses for the chemical reaction to happen.
With my plastic frame half melted off, there's no other choice besides changing to a new frame. 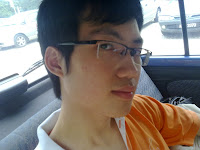 Before and After
The funny thing was how the uncle optometrist keeps mumbling about the power of my sweat to melt off the plastic frame all the time i was there. According to him, never before has he encounter such incident of corrosion to plastic frame during his 100 years of working as an optometrist. My sweat must been have very acidic indeed, like a tribase strong acid, enough to melt anything which dare to stand in my way.
Which got me thinking. If my sweat is that powerful, perhaps i could be my own superhero! Like Superman, i'm born with this unique ability that has lie dormant all these while, showing itself only now once i have reached puberty. Instead of super strength and the ability to fly, i have acidic sweat instead that can corrode through virtually anything. I even thought of a tagline for my new job, "Fighting crime with a swipe of sweat!". Think of all the girls and fame that i could attain! And Sweatman would be how i'm called.
However, the thought about my weaknesses also did cross my mind. All superheroes inevitably, have weakness, sadly. For Superman it was Krypton while for Spiderman it would be the lack of tall buildings and tress. And for me, i think not being able to fight without sweat would be my biggest weakness. Fighting crime in cold conditions, for example, will surely be my doom. Thankfully Singapore happens to be a tropical country without winter.
Or if i'm not that noble to skip my sleep for crime fighting purposes and prefer not to risk myself getting killed by notorious criminals, i could also commercialize my sweat too!
Named as the Lukey's BO Anti-Criminal Spray, it is an alternative to pepper spray to deter robbers, rapists and other criminals, only more deadly. Criminals who is unlucky enough to be sprayed by this highly acidic sweat risks deformation of body parts wherever they're sprayed at. With such deadly spray on the markets, crime rates will drop while the sales of my spray will climb!
My mum however, was fuming mad over having to pay an extra few hundred dollars to replace my spectacles' frames.
Labels: Life Updates Talk Cock