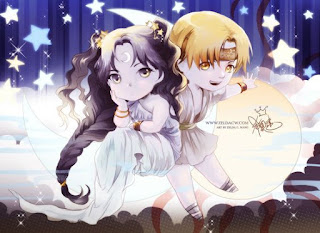 "You've got to be kidding me!" T yells exasperatedly, as she watched the group ran off on their own. She has been trying to get them to eat llama meat for months now, only to have all her work ruined when K appeared with a mutilated corpse with maggots bursting out of its torso, claiming that eating llama meat does that to the body.

He was grinning ear to ear as a counter appeared on his head, adding a hundred points to the string of numbers. T glared at those numbers. "You know merely influencing a small behaviour is not going to add a lot of points, right?"

K shrugged at T's words. He snapped his fingers twice, and the corpse beside him disappeared. "Even though you say that, but I don't see your points being anywhere near mine."

T rolled her eyes, ignoring K and the number counter above her head. She would have netted almost ten thousand points if the entire group had tried the llama meat. She even did the whole feat just by pretending to be a doctor and creating some news articles online. The bonus was going to be huge. But K just had to appear and ruin everything.

T snaps her own fingers, and her glasses and clothes disappeared, replaced by the golden silk dress and a crown that she usually wore. She then turned her head to K. "Can't you just have left me alone?"

"And let you get those sweet 10,000 points? You've gotta be kidding me," he retorted. T groaned. K was known for his strategy of ruining the games of others. She had hoped to accomplish her goal before he appeared. After all, there were 26 of them in the game.

"Can't you just have gone to P? He's gotten so much point now," she asked. P was leading the game, almost a few million points from the next person in the list.

K shook his head. "Nah. I can't get anywhere near him without being shot at. That dude is a genius. Being a politician to influence people. He don't even need to use his powers now to control anyone."

T sighed. P was not the only one who was using the politician way. After seeing how successful he was, almost everyone tried to copy him. But it was too easy a method to win the game. And T hated politics. The 26 of them have enough politics on their own. She knew K hated politics as well.

"So... why are you out here in the open, besides to steal my points?"she asked, as she sat on a nearby rock, staring at the llamas on the field. The humans were long gone, leaving only her and K in the open field. She may not get many points here, but she enjoyed the view.

K gazed at her, before turning his attention back to the open field. "I'm feeling a little sick of this game already. Influencing mortals, but not controlling them. All to see who's better. And see what kind of shitty world we turned out with."

T chuckled. K was right. When they first started, the game had seem innocent. But along the way, the players have used their own creation to engage in proxy wars, sacrificing millions of lives just for the sake of points. It was one of the reasons why she chose the unconventional path instead.

"So... what are you suggesting then?"

K plucked some of the grass from the ground, before releasing them to the wind. It was the first time T noticed how dreamy his eyes looked. He then turned to her. "Lets start a new world together."

K grabbed her hands. He brought them to his chest, and T felt a strange warmth surge in her body. In the millions of years since she existed, she has never felt this way before. K's face was only inches from her. "I say lets start a new world together. Without this stupid game. Where we are free to help our creation, instead of using them as our own personal tools. Lets create a utopia, a place that is a thousand times better than this shitty earth."

T gulped. The thought as never crossed her mind before. "Are we even allowed to do that?" she whispered.

A familiar grin flashed across K's face. "Never try, never know. Are you up for it?"
Labels: Short Stories