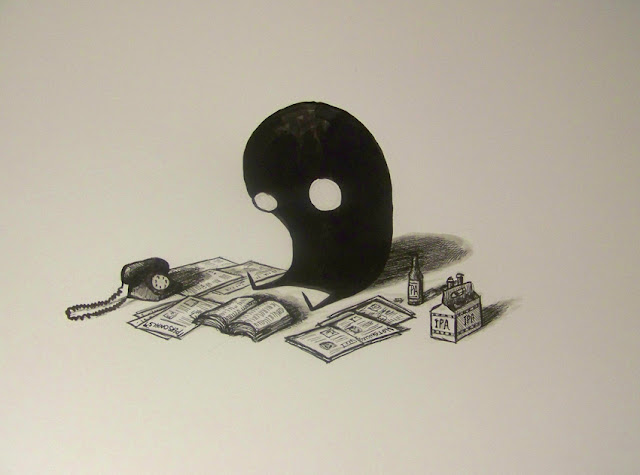 That helpless look in my victims' eyes just right before they die. No matter who they were before, politicians, mobsters, teachers, fathers, they all shared the same look in their last moments of life. That feeling of hopelessness and terror right before I take the life from them. I have forgotten how many of them I have seen, but I enjoy every moment of it. I live for it.

Well, technically not live, since I am already dead and I'm nothing more than a ghostly figure. But they are the things that keep me sane, in all the years that I've been cursed to being what I was. Stuck between the dead and living.

My new victim is no different than many of the men that I've killed. He lives alone in a rented apartment, goes out occasionally, but mostly spends most of his time in front of a computer. The first time I tried to scare him, he seemed almost too thrilled by it.

"Whoa! Is this what I think it is? My room is haunted!" He exclaimed enthusiastically when I first did the door and window slamming trick on him. It was not the reaction that I usually got from my victims.

I tried to up the ante. I have always preferred to torture my victims first before killing them. Seeing how life is slowly sapped away from them as they descend into paranoia, before finally killing them, gives me an odd sense of satisfaction. But not this guy.

Even when I wrote the words 'Prepare to die' in bright red blood in his shower, a feat that would send even the bravest scrambling out from the toilet in pure panic, all he did was to proclaim more amazement for it.

"How do you even do this? Are these your own blood? Or do you get it from somewhere?" He sounded more like a curious five-year old, with no hint of fear in his voice.

Frustrated at my lack of success with him, I did something that I have never done before in all my years of haunting and killing. I used my voice.

"Why aren't you scared of me?"

He laughed at my question. "I guess it's because of my hobby." He then faced my direction. "And cool, you're a female ghost. My name's Mike, what's yours?"

And then he smiled. A smile that brought up a feeling that I've not felt for a very, very long time. Warmth.

"I... don't remember my name..." my voice came out naturally. In a strange way, it made me felt human again.

In an unexpected twist, we ended up as friends. It was during this period where I learned where his fearlessness come from. He calls them computer games, where he plays make believe in his computer. And unsurprisingly, he loved horror games where the story involves malevolent ghosts, haunting and killings. According to him, what I tried doing were cliche old tricks that are way past his fears.

It did not help that one of his biggest wish in life was to be actually haunted by a real ghost.

"You know the first time I heard you speak, it was like a dream came true for me!" It was one of the many chats we had subsequently. He would ramble off about how his day had been the moment he steps into his room, knowing that I was always there.

Over the next few weeks, I came to know more about him. He had just moved to town for a month when I started to haunt him, wanting to start a new life in a new place. Bad breakup with an ex who cheated on him, plus both his parents were not around anymore. So he decided to just take up a new job hundred of miles away, a leap of faith.

"How about you then? What's your story?" He asked one day. I tried to remember, to tell him my story just like how he told his. But beyond my memories of haunting and killing, I could not remember anything prior to my death. Who I've been when I was alive, how was I killed. Tried as I might, I just couldn't recall.

"That's okay, maybe we need to give it more time," he replied sympathetically, and continue to say so every time I could not give an answer. I never told him about my previous killings.

Mike tried to "bring me out" in attempt to jog my memory. He would go to different restaurants, movies and parks, so that anything familiar may trigger memory of my previous life. He would talk to me during this period — about the food of the restaurant or how the comics differed from the movie — whenever we have these "outings".

Strangers would give him a strange look whenever he does this, because it seemed as if he was talking to himself. Mike didn't care anyway. He said that he was happy how things are and I was too. The warmth that I felt the first time I see him smiled slowly turned into something else. Love.

Without the both of us knowing, almost a year has passed. We were visiting Disneyland this time, Mike bringing me through the different rides and telling me the stories behind them. I could remember Disney stories, but I could never remember where or how I knew of them.

We talked about our favourite Disney princesses, and both of us picked Mulan because she was independent and did not rely on any guy's help. We laughed about it, at how strangely similar we seemed to be. And it was during that moment when he brought up a box from his pocket.

"I know this is unconventional, strange at best," he looked at me, with that familiar smile of his.

"But over the past year, I have come to realize that love need not be defined in a physical sense, but rather in the moments we share, the emotional bond we have. And to be honest, I felt nothing but joy since the day you first slammed my door and until today its still the same."

He opened the box, revealing a ring inside.

"I want to spend the rest of my life with you," he finally said.

And that was when all it came back. The day where another guy told me this, right before stabbing me multiple times. The day when I had my life cruelly snuffed out of me, just because I did not share the same feelings for a person that harassed and tortured me. How in his final desperate attempt, he told me that he wanted to spend the rest of his life with me. By stabbing me dead.

The rage and hatred all came rushing back. How I rejected the light and turned towards the guy, blindly murdering him, enjoying every single moment of it when the guy's look turned into pure fear, realizing that the girl that he just killed is going to do the same to him. Revenge has never been sweeter. And how I swore vengeance on every male out there, making it my purpose to torture them and kill them.

How I enjoyed making powerful men powerless at their last moments in life. That hopeless, terrified gaze in their eyes.

And as Mike laid there, bleeding to death from the wounds I inflicted, I got to see a new look in my victim's eyes. The look of having been betrayed.