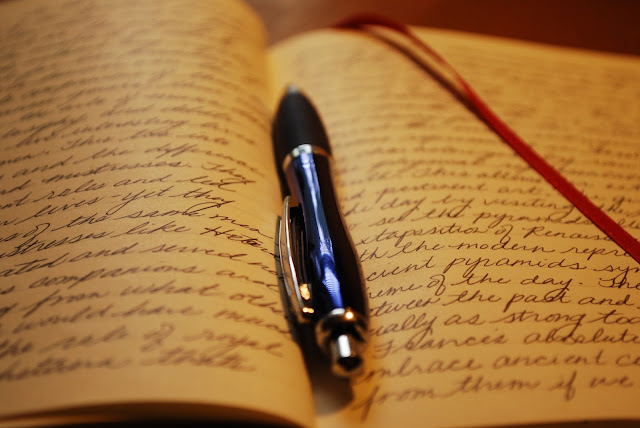 "Hey, look what we have here," John said aloud, to no one in particular, on a bright Sunday afternoon. He was sitting in the attic in his foster parents' house, a place that he has not been to for more than two decades, trying to clean up the house to make it presentable to a prospective buyer.
It was a place he vowed never to come back anyway, if not for the sudden death of his foster mum, Janet, the sole occupant of the house. His foster dad, David, had passed away two years prior to Janet. He found it surprising how they would leave the house to his name, considering how much they hated him growing up.

He picked up the leather-bound book that caught his eyes. It was lying inside one of the many boxes of old belongings that both David and Janet kept. He looked at the book nostalgically, its yellowing pages reminded him of a childhood that he would rather forgotten. It was a book where he penned down his thoughts, emotions and feelings. A place where he could be completely honest without being judged. The book was his diary.

He flipped to the first page of the diary, his first entry, scrawled messily across the lines.

Hi diary. I finally got you today and I am happy. I don't have many close friends in school, and I guess I can only share my true feelings with you. Mum was angry today because I forgot to finish my homework. She caned me so badly until I can't sit down. It's not even my fault because she was too busy to help me. And it's not like dad tried to help too. He just comes home late everyday, smelling like smoke, and ignores me. I really really hate both of them. I wish I don't have them as parents."

John sighed as he finished the last sentence. It seems that the mutual hatred between him and his foster parents had started earlier than he remembered. He flipped the page to read his second entry, only to notice that there were writings aside from his in the diary.

John was somewhat like a neat freak, and when it came to his diary, he had always written on the right pages, leaving the left pages blank. But as he flipped through his diary, he noticed that for each of his entry in the diary, there was a corresponding entry on the page behind his. In a different writing style, a different colour. It was something he never seen before.

He immediately read the first entry of this diary intruder.

"Dear John, forgive me for writing in your diary without permission, but I came across it when I was cleaning your room today, not sure if you'll ever come back again. I have finished reading all your entries, and I couldn't help but cry after that. Now that you're gone, I've only come to realize how big an impact you have left in me and David's life, and how much we've wronged you over the years in all our pent up frustration against you.

The least that I could do, perhaps, is to tell our side of the story, in the hopes that you'll read this one day, and forgive us for everything that we've done or did not do."

The words caught John off guard. In all the years of knowing Janet, he never shared more than a few sentences with her. He turned randomly to another page.

Hi diary. I really don't understand why do the idiots even bother giving birth to me in the first place if they hate me so much or if they didn't have the money to have a child. I only wanted to go to summer camp with my friends, but mum said that we had no money and shit like that, and when I tried to protest, Dad slapped and grounded me, so now I am here stuck. Not to mention that mum is only cooking mashed potatoes and fried eggs as lunch and dinner for a week already. I hate both of them."
Just like his first jotting, another accompanied it on the page after.

"The first summer camp that you wanted to attend. How big the fight we got into, how you attempted to run away the next day. It was particularly bad that year, as David just lost his job and we had to do what we can to survive. Please forgive David, as he was stressed enough already as it is during that time, constantly worried about feeding the three of us."

John blinked, unsure of how to feel. He could only remember feeling immense dislike for Janet and David growing up, how left out he was during his childhood, but never had he thought of the story from their side.

And then he knew there was something that he must read, and quickly turned to the page.

Hi diary. Guess what. I am not even their child. I was merely adopted. Explains why they hated me so much. Found out today when I was arguing with dad, or should I call him David from now on. As usual, I just wanted to spend some time with friends but he asked me to go to find a part time work to help the family. I asked him why should I help since they never loved me as a family. I could still remember his words, "It's cause you're never family to begin with, you're merely adopted!"

Ha, funny right. They're banging on the room door now asking me to come out, but I know better than that. You're the only one I can trust diary."

And behind the page, Janet's writing.

"I remember this day John. The day when the dam broke loose. We have always wanted to tell you John, but after a while, we accepted you as part of the family and thought that there was not a need to tell you. We have never regretted the decision more. After that day, we tried to tell you the entire story, but you have shut us out completely, refusing to even interact with us.

The fact is, you are family, John. Not entirely our son, but you're the son of my sister, Jane. She and her husband had passed away in a freak incident, and being her sole relative, we had to take you in. Jane meant so much to me when we're growing up, and I thought it was only fitting to raise her son. I was selfish, John, in that I saw raising you as a repayment to my sister.

David of course hated the idea as well, he has no obligation to my sister, but after finding out he's sterile, he seemed to accept you reluctantly. It's only during your growing up phase that we realized how inadequate we were in giving you a good home, but we tried. I'm not asking you to forgive us John, I'm merely asking you to understand."

John's chest were beginning to feel heavy and his world started to blur. Everything that he thought he knew crumbled slowly before him, replaced by a feeling of self-loathing. Janet had tried reaching out to him so many times over the past two years, but each time he would just conveniently pushed it aside, pretending that she and David never existed.

There was one more day that he had to read.

Hi diary. I am finally leaving this wretched house! Woohoo! Freedom at last. Mike has been able to hook me up with a job at a neighbouring state and I am leaving the first thing I can. Not gonna tell Janet and Mike directly though, just going to leave them a letter and ask them to forget about me. Since they'll be happy that I am gone, anyway. Won't be taking you with me though, like they said, new life, new start. But thanks for keeping me sane all these years!"

"You left today, without telling us, leaving only a letter. David almost had a heart attack after reading your letter. I expected him to scream, shout, curse me for bringing you in, but he just sat there on our porch every evening after work, hoping that you would come back. For six straight months he did that, every single day. When he finally realized that you were never coming back, he just went back to his life, forbidding me from ever talking about you again.

I cried everyday, John. Wondering what I have done wrong, wishing every single day that I could turn back time, to try this again. I cried until my eyes swelled, my lungs hurt. I begged your friend Mike to let us know where you were, but every time we called, you ignored us. And it seems that this diary is our only chance at reaching out to you.

We're not perfect parents, John, far from it. We know. I thought I could be good mum to you. I was sadly mistaken. We understand your desire of wanting to get away from us, and we don't blame you for that. You have every right to. And we are sincerely sorry for all the hurt that we've caused to you when you're growing up. We really are.

But we just wanted you to know that we loved you, John, as bad as we are at expressing it, you gave meaning to our lives. Our only regret was that we didn't tell you enough. And because of this, we will bear this until the day of our death. But more than anything, we're happy that you have found a fulfilling life and we hope you would continue to be happy, John, to enjoy what we could not have given you.