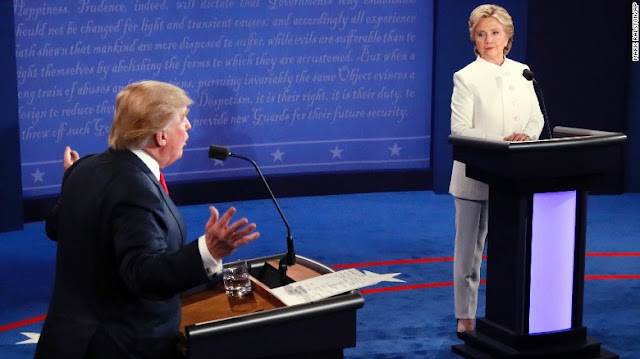 Disclaimer: Views expressed in this blog are exclusively my own and do not represent any organisations that I am a part of

I've been following the 2016 elections closely since the Primaries kicked off. As someone who has never set foot in the US before, I find it strange how I was attracted to the US Presidential election this time round, considering how 2016's election may go down in history as the one that alters the course of modern civilization.

Personally, I enjoy seeing how people rationalise their decision in choosing their candidate, which is made more complex given how the two candidates are considered "unlikeable". More interestingly, we are also at a unprecedented time in history, where interest and opinions are shared freely, which in my opinion, is one major factor in determining how the election will turn out.

Mainly because as compared to the past, we have a more control in the information we consume. Unlike the past where we may be limited to physical newspapers or TV, where there is a common standard put in place to determine how information is dispersed,we now have the internet, where people are free to choose the type of information they consume.

This freedom to choose has led to a further polarisation of opinions among people.

Unlike mainstream mediums in the past, which are mostly guided by a set of principles, anything goes on the internet. You can make wild claims on the internet without fact checking, whipping up vague evidences or proof, and there's no real consequence awaiting you, unlike the pre-internet days.

In today's world, we gravitate towards what we're inclined to believe. The conservatives will consume the right hand views, while the liberals will go for the left hand views. In the US election case, Trump's supporters will go towards conservative news, while Hillary's will stick to more of the mainstream media and left wing views. To make things worse, social media feeds into this, curating stories that you're more likely to consume, further contributing to the polarisation.

The result? People who refuse to see beyond what they believe, only arguing along the lines that they're most comfortable with.

The 2016 election is not just about electing who's the lesser evil, it's also showcasing a widening rift between factions, people with different viewpoints, with little middle ground to tread on. Because we're so comfortable with our views, so afraid of the other that we stick religiously to one, refusing to entertain any contrary thoughts. Hardened in our own worldview. Not allowing any discussion.

And that, is the most dangerous thing of all.