When is this Pokemon-GOing to stop? My story and a rant


What exactly am I trying to achieve here? Why do I like the game so much?

I ask myself the same question every single time I find myself outside, eyes focused solely on the screen of my phone, checking for nearby furry monsters to capture, my head plotting for the best path to walk.

Is it because I'm looking to prove that I can be good at something? Or is it because the game gives me an escapism from the bore of everyday life? Os is it recognition that I seek? I have no idea. Cheesy as it sounds, from the day I started to play the game, I knew I wanted to be one of the best, if not the best.

But unsurprisingly, despite it being labelled as a game, Pokemon Go mirrors the real life in many ways. Success does not come easy, as the game requires you to walk, travel and plan in order to be good. You'll need to make sacrifices, strategise and put in a considerable amount of effort in order to set yourself apart.

Then again, almost everything in life does. A hobby stops being a hobby the moment you decide to be serious in it. 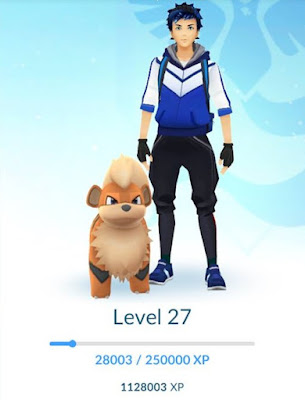 It has been close to three months since I first started. And in this span of time, I have walked more than 275km (most of it, since I occasionally have my game on when I'm on buses or cars); caught 3,435 Pokemon and became someone that I used to hate in the orginal games: a bird-catcher-bug-keeper-youngster hybrid because of all the pidgeys, ratatas and bugs I caught.

Hours have been spent walking around Botanic Gardens and the nearby neighbourhood park, farming Pokemon and spinning Pokestops in the quest to level up. I don't consider Level 27 to be quite high, but still a considerable achievement nonetheless, stopping short of going full otaku on Pokemon Go by consistently camping at far flung locations known for their good spawn.

I don't know what my end point will be like — I don't expect myself to ever reach the fabled Level 40 — though I would really like to picture myself consistently conquering and maintaining gyms around Singapore. A feat that is sadly close to impossible right now no matter which gym you take, due to the high amount of cheaters currently in the game.

I foresee that the cheaters will most likely be the reason I'll stop playing the game one day, because when you spend so much time and effort to be good in the game, only to face someone with a whole Dragonite army just by sitting at home, it can get quite discouraging sometimes.

Because seriously, just take a walk around Singapore and look at all the Singapore gyms. A Pokemon that is supposed to be the rarest is in fact one of the most common around. I'm willing to bet a good amount of money that at least 50% of the active Singapore players are using some form of GPS spoof or bot.

But still, somehow I will continue playing though, hoping that maybe one day the cheaters will get bored of the game and leave the game to us forever alone legit players. That or maybe I'll succumb to temptation and join the dark side one day. Like they say, either you'll quit as a legit player or play long enough to become a cheater.