Outraged over Harambe and the Cincinnati Zoo?

The internet has been flooded with outrage over the the recent Cincinnati Zoo incident recently. Harambe, a silverback gorilla, was killed by authorities after a four-year old boy fell into the enclosure,in an attempt to save the boy's life.

The popular opinion right now? The authorities have been wrong in shooting Harambe, because people either believed that he was trying to protect the kid or that there was a better option that does not involve the killing of this magnificent creature. A significant portion is also blaming the parents for being negligent in allowing the child to enter the enclosure.

Basically, the authorities are at fault and the parents are at fault for this killing that could have been easily prevented. There's even a petition demanding justice for Harambe,whatever that means.


Who made you the gorilla expert: The speed at how we form impressions.And projection much?

Some of the earliest reactions to the incident were that Harambe the gorilla was actually "protecting"the child, rather than intending to harm him. These are perhaps the people who perhaps watched too much Disney movies, because if you were to watched the whole video of the incident,the one where Harambe dragged the child across water with the child's head under the water, it's really tough to believe that he was actually trying to"protect" the child.

Many people tried to justify their logic through an incomplete understanding of the entire chain of events ("the photo showed them holding hands!" or "the video showed him holding the child!"),or through off-hand suggestions that is not well-informed, like the use of tranquilizer (it would take 10-15 minutes for tranquilizers to work, and sometimes multiple shots, which could have agitated the gorilla more).

But the way people formed their own judgement over the incident is perhaps indicative of how we make decisions today: a quick snappy decision based on a simple fact, without the full understanding of the entire incident. We take one piece of information and fill in the gaps ourselves.

With so much news and information bombarding us nowadays, who has the time to look beyond the information that we're given? (Explains how Trump is so popular) 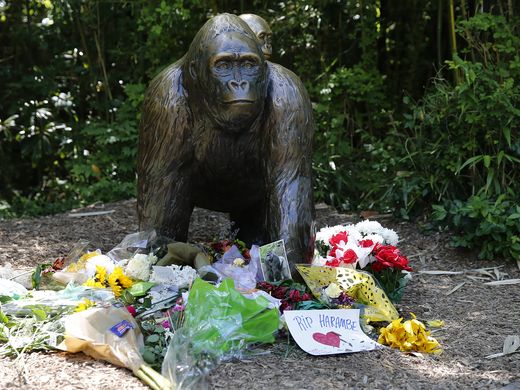 It's also amusing to see how fast people jumped into condemning the zoo, as if they knew that if the zoo didn't kill the gorilla, all will be well by now. The boy will be returned safely and Harambe will continue to live happily.

What they didn't realise is that should the unfortunate opposite have happened, where the boy lost his life, there will be an equal amount of outrage.

"Why didn't the zoo do anything?" / "Why was the zoo so slow to respond?" / "The zoo should have just killed the gorilla to protect the boy!"

Who's say that this won't happen if the opposite took place? When it comes to the internet today, there's just no pleasing anyone.


Karma! Justice! Revenge! Eye for an eye! We don't care if we are all blind!

It's also sad to see how eager we've become to see "justice" served or some form of revenge meted out when it comes to incidents like this. In our mind, someone always has to "pay". Instead of forgiveness, we all prefer punishment instead. So everyone goes to harass the poor mother because she hasn't been a "good" mother, just because her child wandered off.

As if we are all magically good parents. As if it will make us all better people if we are to cyber-bully the mum, throw accusations at her or make her life a living hell. As if Harambe will thank us for calling the mum irresponsible.

And it's the same for every other person that we assume to be "bad" on the internet. The dentist who hunted in Africa for example. The blogger who made a mistake. What are we trying to prove anyway?


Don't let this end up as another slacktivism drive

Perhaps the saddest thing is how we all assume that we are doing good by starting some petition to demand justice, to post some angry comments online about animals or to harass the mum. I believe that all these stems from good intentions but these give nothing more than an illusion that what we're doing is making a difference.

More often than not, we'll get angry over this a while, signed some petition thinking that the petition will accomplish something then move on to another hype when this dies down. And the amount of change we achieve at the end of this entire thing? None.

It'll be a classic example of slacktivism.

If you truly care about zoos, animals or Harambe, then go beyond posting a comment online that will eventually be lost in the online noise. Because that's no different than shouting to the wall asking for poverty to end. Donate, volunteer, raise awareness. Sustain the effort. Only then perhaps you'll make a difference.


The death of Harambe is indeed an unfortunate incident, but it has indeed raised important discussions about zoo safety and the captivity of animals. Get angry if you must, but not at the wrong places. Think that the mum is wrong? Then think of how can we improve parent knowledge (though accidents still can happen to the best parents). Think that animals should not be kept in zoos?Then do your part in making the wild a safer place for animals.

Because at the end of the day if you're just angry because everyone else is angry, then you're just joining into a mob mentality that ultimately leads to nothing constructive. Like shouting against a wall. Or worse, making another person's life more miserable than it should be.