The end of family

“Give me a dozen healthy infants, well-formed, and my own specified world to bring them up in and I’ll guarantee to take any one at random and train him to become any type of specialist I might select – doctor, lawyer, artist, merchant-chief and, yes, even beggar-man and thief, regardless of his talents, penchants, tendencies, abilities, vocations and race of his ancestors.” – John B. Watson, 1930. 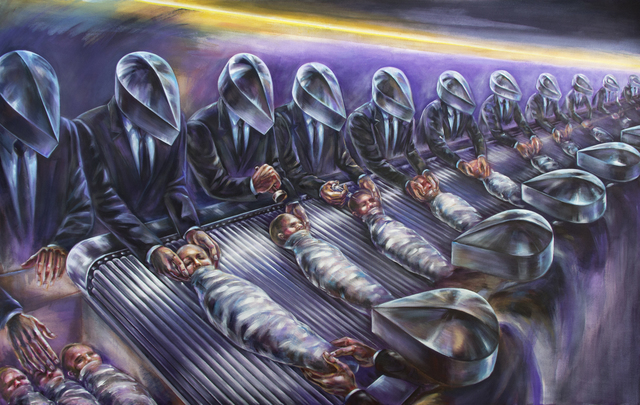 Imagine a world without ethics. A world where without high-lofted ideals and values such as self-actualisation, human rights and equality. Where only productivity and efficiency are the only two outcomes that matter.  Where the needs of the many outweigh the needs of the few. Those in power only care about two things: The advancement of human society as a whole, and the most efficient way to achieve it.

Mark was standing in front of the classroom, halfway through his lecture when a young hand shot up from the back of the class.

“Teacher, how was it like back in the day then, when they still had marriage and family?”

Mark eyed the young boy, Kyle, who asked the question. He thought about all the history books that he have read during his time back in university about marriage and family. The videos that his lecturer made him watch.

“Well, Kyle, people used to be much closer back then, for starters. People had those who stick to us for the rest of our life, whom they called family. It’s very different from what we have now, where we only have friends. They used to have this thing called love, which is a feeling that they usually reserve for their family.”

Kyle simply nodded his head response with a slightly confused face. Mark was not really surprised. After all, it is difficult to grasp a feeling that you have not experienced before. A feeling that does not exist in your vocabulary. To many of his students, this was probably the first time that they had heard about this word called love. He wondered if he had violated the class curriculum guideline by mentioning love.

It doesn’t really matter anyway, since his students will soon be learning the reasons behind the abolishment of the family institution and marriage altogether.

After the class had ended, Mark watched as the students file onto the buses, getting ready to head back to their dormitories. He wondered how it was like last time, back when students went back to their home instead of dormitories. Would life have been more enjoyable? The government and his superiors say no, but Mark wasn’t so sure anymore. But he understood the reasoning behind their move. He studied the history of the family and marriage extensively, after all. He wanted to feel a sense of lost, of how life would have been if he knew the woman who gave birth to him, his mother, as how she would have been known if he had lived a few hundred years earlier. Or even his father.

But it was hard to try to feel a sense of lost over something that you never really had. Eventually, he went back to his table, and started marking the homework of his students. Every now and then, his thoughts drifted back to the materials that he studied back in university, trying to form a picture of how life had been back then.

The family structure was one of the most enduring characteristic of human society since the dawn of human civilisation. There was always a father and mother, who worked together to raise a child together. The system worked fine for thousands of years. It is one big repeating cycle where couples have children and raised them to become functioning members of society. In turn, the children will look after their aged parents and have children of their own. This was the norm that worked for the longest time.

However, somewhere in the middle of the 21st century, things began changing. As society changed, family was no longer defined by a mother and a father. There were cases where there was only a mother, two fathers, grandparents or two mothers. In addition to that, parenting was falling rapidly apart even in the traditional family. As people bicker on whether it was normal for children to grow up in an environment with two fathers, children in general are growing up to be much more spoiled and entitled than their parents.

Names like “Strawberry Generation” and “The Spoilt Era” began to crop up to define the younger population as societies changed. Around the world, populations began to grow more affluent and poverty was slowly edged out. Children began to wield considerably more power than their parents while parents began to grow increasing detached from their children due to reasons like work or personal interest.

Parenting abilities, which seemed to have been innate in humans for so many previous generations, seemed to have taken a plunge drastically. Before long, countries were facing issues of an entitled workforce, who demanded to work with benefits above their productivity and ability. Economies were not able to cope with the sudden change.

Children who stayed at home living off their parents earnings started to become a norm rather than an anomaly. They wanted easy work, but were not willing to expend the necessary effort to acquire enough skills to do so. Gradually, the number of people entering the workforce began to dwindle significantly with each generation. Together with a rapidly ageing population, it was a disaster waiting to happen.

There were already calls from concerned groups, researchers and activists that something needs to be done. That some form of control should be reinstituted. But there was an equally loud voice from the opposing camp, saying that going back to the methods of the past would only make situations worse. Mark remembered watching a rally where a speaker screamed that “We cannot go back to the dark ages of punishment” in response to a question of whether caning should be reinstated.

With both the voices being equally strong and parents having no idea how to proceed, the situation ended with a stalemate with no concrete solutions. The situation only continued to worsen. As things grew more worrying, it was Mark’s country that decided to take a bold move forward. They decided to take over parenting.


In the new ruling, babies born after a certain year were required to be handed over immediately to the government. Parents were given a monetary compensation for doing so and the government will be looking after the children full time. To ease in the transition, parents were only allowed to spend time with the children on the weekend, if they choose to. Overnight, the Mark's country redrew the definition of family and society.

The children were divided into dorms, where they will spend the rest of their childhood in. Everything was provided for these children. The government employed nannies, teachers, cleaners and cooks to look after the children full time. They are in turn supported by an in-house psychologist, who's job was to track the children's progress and recommend activities for each child.

Many thought the move would fail miserably. Many predicted that society will crumble overnight. But to everyone's surprise, the move was widely celebrated by parents. To them, it was like lifting a burden off of them, where parenting can now be a part-time job. For those who argued about needing children as a social safety net, the government changed the retirement policy too, promising to look after those who pledge their children to this system when they're old.

By doing this, Mark's country essentially created controlled environments for these children to grow up in, where they can decide what to teach or nurture in these children. Their reasoning was simple: The government can do a better job at raising these children than disinterested parents. They wanted to raise productive members of society according to their specification. In short, they wanted to have a stronger hand in shaping society, instead of just leaving it to parents. There was too much variance involved.

And it was in this kind of environment that Mark grew up in.

(This draft has been sitting ignored for quite some time now, which is why I decided to just post it up before it gets ignored forever. Yes, I have this tendency to forget about stories that I wrote. Need a better system for that. Anyways, I also wanted to test to see if this idea would hit it off too. So if you like it, do let me know so I can continue with a Part 2 for this.)