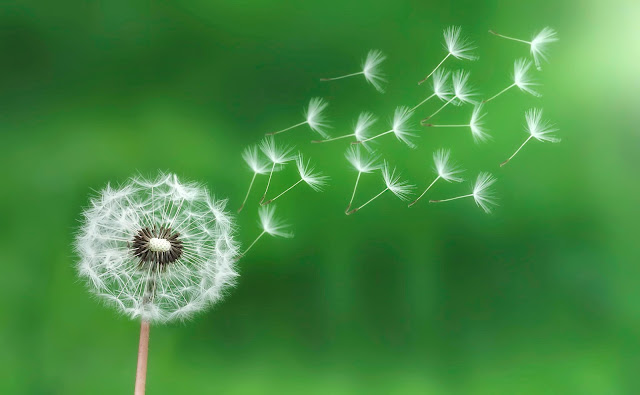 Her hand held a single dandelion, its white florets swaying briefly in the wind. Her round black eyes prodded him for an answer.

He answered nonchalantly, as though he knew the answer all along.

"Oh, it's because the white part is shaped like a lion's mane!" He made that up on the spot, in an attempt to impress her, like how guys who are in a crush usually do. She nodded and smiled, seemingly satisfied with his answer, and turned her attention back to the dandelion.

Her lips gently blew on the flower.

One by one the white florets took off, carried off by the wind, in a journey that only they will know the ending. He smiled too looking at her. How much he wished he could freeze the time and spend the rest of eternity with her, on this field.

For that brief moment, it felt as if this was the only place where he want to be. He felt happy. Blissful. He wondered if she felt the same way.

Strange how this took place more than 15 years ago.

"Hey, dude, why are you staring at the picture for so long?" A familiar voice snapped him back to reality. A painting of a girl blowing a dandelion hung in front of him, with the artist's name signed off at the bottom. Bryony. He wondered what the name meant.

"Yeah, I'm coming," he shouted back, as he took one last glance at the painting. It's weird how a single painting pulled him back to a memory so many years ago. One that has been largely forgotten, replaced by the harsh demands and realities of adulthood. He missed the innocence of a time when two students could just walk in the field and let nature surround them. A time without any worries.

On his way out, he asked the receptionist how long the paintings will be up for exhibit. His friend asked him if he was planning to buy the painting. "Maybe," he answered. There was a certain longing in his heart that the painting triggered. It felt something like sadness, mixed a little with regret. It reminded him of a piece of himself, lost amongst the tides of time.

"I will come back for the painting," he thought. After work.

In was the middle of a hot afternoon after exams. Both of them sat at the edge of the school field, under the shade of an Angsana tree. It was their favourite hangout place, aside from the field. The tree's yellow flowers were blooming in full, giving the tree a bright yellow-green mix. But he was in no mood to admire the sight.

"It's the only place where they offer the course I want," came her reply. Her voice was soft, sad even. She stared at her notes. Her fingers mindlessly twitched her pen.

In the end, all he could muster was a weak, "Will we be keeping in touch?"

Her hand reached out for his and gave it a comforting press. "We will."

"You say one ah," he said, turning his head towards the group of students leaving the school. He blinked furiously, afraid that she would see the tears forming in his eyes. He thought about the future, of what lies beyond this school, beyond this town, for him. His heart ached.

"Look, a dandelion!" His thoughts were broken by her sudden exclamation. He turned around to face her, and just like that day so many years ago, she was holding a white dandelion.

"What are the odds?" she mused loudly, spinning the stem between her fingers. Her eyes caught his. Even now, they still gave him butterflies. "Do you think that this means good luck for us?"

He snatched the stem from her. "Yep. I sure hope it is." He stretched the dandelion towards her and winked. She smiled back, taking the hint. Together, they blew at the florets and watched the wind carry the white seeds away.

He sure hoped that they will keep in touch. He knew he would try his best to. He told himself that where there was a will, there will be a way.  Such was the optimism of youth.

"Someone bought it?!" He was back in the white halls of the gallery. He could not believe it. In the short span of a few hours, the painting that he wanted was gone.

The receptionist eyed him sympathetically. "Yes, I'm afraid. But if you like, we have a lot of other artworks by other artists that may interest you..."

He was out of the door before she could finish. If he had known the painting will be gone so fast, he would have bought it straight away. But then again, if he would have known how things would turn out eventually, he would have done a lot of things differently too.

For the first few months, things were fine. They were constantly chatting with each other over email, sometimes MSN, if they were lucky. They would try to Skype call each other of possible, to keep each other relevant in their lives.

Though they were continents apart. it felt no different. They shared and talked about their lives, their favourite animes, like they have always used to. They confided in each other, discussed the experience of being in a completely new place. Like her, he eventually moved out of their hometown, to pursue a better education elsewhere.

But as time passed, despite his best efforts to stay in touch, their distance gradually grew. They took longer to reply each other emails, the exchanges shorter. She grew busier with her school work and her co-curricular activities. He was no different. They had new friends, new lives. Initially, he still knew of her new friends' names. She took the time to tell him. But after a while, she no longer bothered.

Keeping in touch became more of a chore, a bother. Their contact grew lesser, infrequent.

Months became years. Eventually, they remained only as each other's Facebook friend, who only see each other's updates indirectly on the "walls" of the social network. She was just another friend on his newsfeed. It was through there where he found out that she had now a boyfriend.

It was painful when the photo first popped up in his newsfeed. But then again, it only seemed natural that life took such a turn. One can't live in the past forever, after all. He unfollowed her the very next day. She reminded him too much of an unfulfilled past.

A few months later, he got together with another girl too from his school.

"Hi sir, just wanted to let you know that if you're interested, Bryony will be holding an exhibit tomorrow at the city expo. Would you like to attend the event?"

The call took him by surprise. He wondered why the gallery receptionist bothered to call him about the event. Maybe she thought he was a fan of the artist. He flipped through the calendar on his table, to see if he was free on that day. There was more than a month empty.

"Yeah, sure. Put my name down." He must be really bored to go to random art events, he thought to himself. Still, it was still better than being cooped up alone at home. Breaking up always had this effect on your social life. You tend to lose a sense of what to do in your free time because your life has always been so pre-occupied with each other.

He was looking at the artist's various work when she was ushered onto the stage. Strangely, she seemed to like his hometown a lot. A lot of her drawings featured landmarks that were familiar to him. The old post office building, the iconic coffee shop and the town hall that defined the place that he grew up in. They were popular tourists spots, after all.

It was not until the emcee began to introduce her did he suspect that she may be more than just liking his town.

"Why did you choose the name Bryony as your artist's pseudonym, anyway?" was one of the questions.

The artist, dressed in yellow and white stripes, smiled shyly. "Well, it's because of an old friend, whom I used to know very, very long ago. We had this promise, you see, that should we lose contact with each other, we would give ourselves a not-so-popular flower based name to help identify each other, should we cross path with each other in the future."

"Wow, that's a really strange promise, isn't it?" The emcee continued. But by now his heart was thumping fast. It was a promise all too familiar to him. Images of an Angsana tree and a field covered in white came flooding back to him.

"You know, lets make a promise, in addition to keeping in touch." He studied the dandelion in his hands, now just a tiny little bud. "Let us have a name to identify each other, should we ever cross paths again."

She laughed to his idea. "And what would you suggest?"

"How about flower names? Since we love flowers so much. And I bet it's an easy way to identify each other. And I am going to pick the most ridiculous sounding name, ever." He suggested confidently.

"So what will you call yourself?"

"Oh, it looks like an audience member has a question for you, Miss Bryony," the emcee announced, pointing to the guy who raised his hand. A crew member hastily passed a handheld mic to him. "Would you like to introduce yourself first, sir?"

He took a deep breath in, and exhaled. His eyes met the artist's and gave a knowing smile. "Hi everyone, my name is Dandelion."