Life is Strange Ep5 (Polarized): How it should have ended 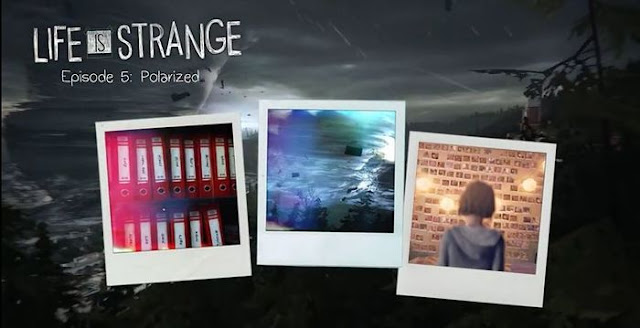 Warning: Numerous critical spoilers ahead. Leave now if you hate them.

Like many others, I was dying to see how the final episode of Life is Strange (LiS) would have ended, after the superb build up from the previous five episodes. And like many others, I was left feeling unsatisfied after the ending. After watching the two separate endings, I could not help but feel that something was off. The ending felt forced, disconnected from the rest of the story.

It's not that Episode 5 is bad, though. I thought it started great and it maintained its performance throughout three-quarter of the game. The escape from the dark room, the numerous back and forth between different timelines and the nightmare sequence was all beautifully crafted. It kept me at the edge of my seat, the way LiS should. It was only after Max woke up from this "dream" when everything came tumbling down.

There were too many unanswered questions, too many sub-plots ignored. The history of Blackwell, Rachel Amber, Samuel and Max's power were not given a proper conclusion or explanation, I felt. The dots didn't really connect at the end, a sentiment that is shared by a lot of other players (looking at the Reddit discussion). I would venture a guess that production deadline kicked in near the end of the game, which may explain why the part after the nightmare sequence was unceremoniously dismissed as a dream, one of the most cliched explanations in storytelling history.


I didn't like how the story concluded after the nightmare sequence, and I felt the story would have been much better if it ended like this:

The nightmare sequence isn't just a nightmare inside Max's head, but rather a reflection of all the different realities that Max has created or could have created. By repeatedly using her powers, like Warren suggested, she broke the boundaries between different realities, causing her to be trapped in this "limbo" existence.

Like what was pictured in the game, she finally reached the lighthouse in the limbo state, the object that started everything in the first place. The tornado is still there, only this time you can make the lighthouse even creepier, maybe have Chloe's body there, perhaps sending the message that even after everything, she still failed to save her. You could also have the different Arcadia Bay residents all there, all mocking Max.

This time, however, the lighthouse seems different. There's light behind the front door. And it is still standing firm despite the tornado, which is different from the first few visions that Max had. Max, of course, forges ahead, opens the door and steps inside.

To her surprise, instead of stepping into the lighthouse as expected, she was stepping back into the outside of the lighthouse, only this time the tornado is not there. She was greeted by a warm sunlight, a gentle breeze and a magnificent view of Arcadia Bay. She's not alone, however. Sitting on the bench was another girl, staring into the distance, wearing a familiar checkered shirt.

"Come here and take a seat, Max." The girl calls out to her. It was a voice that Max could not recognize. She walks towards the bench, sits down and looks at the girl. She was none other than Rachel Amber.

After a few moment of silence, Rachel finally asks, "Do you want to know how you got your power, Max?" To which, Max quickly nods.

Blackwell has always been a mystical place, Rachel explains. It was located in a place where the time-space continuum is the weakest, allowing for different realities to merge, causing weird things to happen often. The native Indians knew of this, which was why they erected the totems to strengthen the boundaries. Rachel goes on to explain how she had the power as well, which was the reason why she was able to be popular with so many people, just like how Max was able to use her power to choose the correct answer for conversations.

Despite her powers, she was unable to predict what Nathan would do to her, ultimately leading to her death. Her powers then passed on to Max, because that's how things work (think Avatar), and she was able to make appearances in Max's reality as a doe to try and guide Max in catching Jefferson. However, the power is limited in that it is not supposed to change a person's life and death destiny, and in continuously trying to alter Chloe's destiny, Max has caused a tear between the different realities, thus the tornado.

"How can I fix this?" Max then asks. Rachel looks at the distance and sighs, before turning back to Max. Unless she allows destiny to run its course, countless will die because of the tornado. But that doesn't mean she is not able to bend destiny to her will, after all, she has been doing that all along. The only catch is that the realities need a way to "fix" themselves, just like how your immune system attempts to repair your body after catching a cold. The tornado is the immune system acting up.

At the end of it, Max is then presented with two doors to enter, corresponding to the two choices at the end of the game. Save Chloe or save Arcadia Bay. Before Max leaves, however, she wonders if she can ask Rachel a final question. If there has been always a person who can time travel, who's the one before Rachel?

Rachel smiles and says that he loves squirrels a lot. And then she disappears, leaving Max to make the choice.

The ending could then play out according to the default game's ending, though I think the ending for sacrificing Arcadia Bay could have been done a whole lot better. Rather than just have Chloe and Max drive through the ruins of Arcadia Bay, highlight how each of Max's choice has affected Arcadia Bay just like how the first ending did it. How many survived? Among those who survived, what's their ending? What's the aftermath? Show us more.

And that is how I think LiS should have ended.