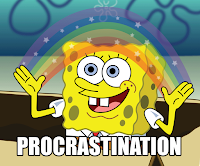 He always wants to write but he always fails to write. What he never fails to do, however, is to complain about how he always fails to write. If only he could beat his the hell out of his procrastination. Which on second thought may not be an easy task, because judging from how difficult it is for him to usually get started on work, his procrastination may very well be a 10-storey high monster. Which means he has to enlist the help of either Ultraman or Power Rangers.

Or Gundam, which sounds and looks way much cooler. Writing in third person, is also surprisingly cool too. Though not anywhere near the Gundam. Him piloting the big ass robot, now that's epic.

And this blog has just taken a complete LSD random turn.