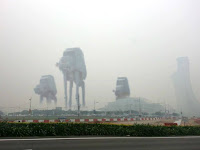 Questions I find myself asking every haze season and I am too lazy to find answers to:

1. Who exactly is at fault here? Individual farmers who don't know any better or big corporations who care only about profit?

2. What exactly is going on in the minds of the people who engage in all these open burning? Do they have any idea what impact their actions may have? Don't they have access to TV or newspapers where they can see the effect of their actions?

3. And if they're aware of the effects of their actions, why do they still do it?

4. What can poor people like me do to help with this issue than just literally suck it up?

5. Why isn't there a bigger emphasis on dealing with this issue, given how it is the only thing that so visibly affects all of us? We only occasionally hear about fines, but why isn't there any large scale effort (reeducation for example) mobilised?

6. Speaking of which, can we invent a giant fan to blow all the smoke to Jakarta so Indonesian ministers who say we should thank them for the fresh air, get a taste of their own medicine?

7. Why information about the root cause of the burning: Why it happens, how it happens, steps taken to combat the situation — seem so hazy? Other than the PSI readings update, there has been little to no announcement of what is going on in Indonesia. Whether investigations are ongoing, is there any surveillance, etc.

8. How long more must we endure this? Not just in the next few days, but how many more years must we sit through this "annual" haze season?

And last but not least:

With so much burning going on every year, don't they ever run out of things to burn?
Labels: Random