Because we all need a little optimism (Review: Disney's Tomorrowland) 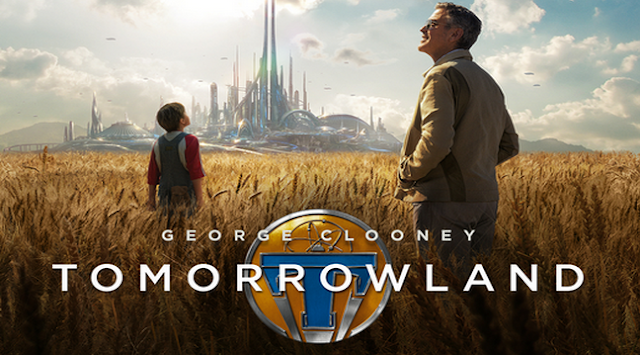 “Even when they're faced with the image of their imminent destruction — instead of running away in fear and changing their damaging ways — they gobble it up in movies, games and all forms of media. And that is why they deserve to go extinct,” - paraphrased from Tomorrowland.

Tomorrowland, Disney's latest movie starring George Clooney, has had its fair share of critiques and articles examining it since the first day it was released. Most of them were bad, criticising the movie's lack of plot and comparing it to the likes of Mad Max, and the movie holds a 49% stale rating on Rotten Tomatoes. There are a lot of other reviews examining why it flopped too, giving reasons such as the lack of attention for originality to our preferences for dystopian messages.

I had my fair share of doubts before deciding to watch the movie, wondering if I was going to make a really bad choice — like the time I distrusted ratings and decided to go ahead with one of my greatest Disney regrets of all time: Maleficient. But the message of optimism piqued my interest — for personal reasons — and I decided to take a leap of faith to see what the movie is really about. Like what kind of optimism is it trying to sell?

Personal disclosure here. I was born an optimist. A dreamer, as how the movie puts it. Growing up, I wanted to change the world, make it a better place. However, like George Clooney's character in the movie, somewhere along the line I grew disillusioned, wondering if a fellow like me can ever truly accomplish anything worthwhile. I grew disillusioned with the human race in whole as well, where we are constantly bickering over small issues without really solving anything.

In a way, I could feel myself becoming more of a cynic old man day after day. One that sees our world as doomed and without hope. Which was why I liked the movie so much, despite its flaws, because the central message is something that I could relate strongly with.

Sure, the story and the minor details are not exactly perfect. I find the main actress to be wholly annoying since the start of the movie with her constant bombardment of questions — constantly feeling like she's being out of place — and it was not easy to relate to her. Thank goodness for George Clooney. The backstory of Tomorrowland was not explained properly as well — why it was founded, why there seems to be a shift in politics despite it claiming to be free of it and why was the robot army built — left most of the audience guessing most of the time.

But in my personal opinion, I don't those flaws overpowered the good of the movie, and to focus on them would be nitpicking. Tomorrowland did offer a thought provoking message that we tend to gloss over in our obsession with dystopian thinking — something which I am increasingly guilty of — and forgetting that at the end of the day, the world is in our own hands. It is us who has the power to make a better life on earth for ourselves and there is a need to start believing in the message of optimism now more than ever.

Of course, there's no world for us to escape to and to have one is extremely unethical and elitist, after all, who gets to decide who stays and who leaves? But underneath all the flaws of Tomorrowland hides an important message: which is the importance of hope and dreams. Something that we have forgotten for far too long. Something that we ought to remember instead of just giving in to despair and hopelessness. That it is useless to fight the system. And that itself, is enough a reason to watch the movie in my opinion.