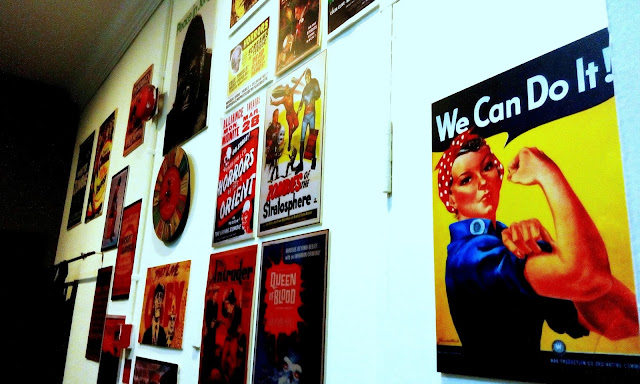 I have my fair share of Escape Rooms by now, but I am always game for new challenges when they pop up. I enjoy a good brainteaser and puzzle solving, and there's a certain sense of accomplishment when you're able to “escape” from the games. I happily said yes to Trapped.SG when they invited me to try out one of their new rooms in Bugis and brought my housemates with me, hoping to conquer yet another escape room (actually I have never really completed any escape rooms, contributing mostly to the failure rates).

The room that we tried was called Hunger Games, which you guessed it, was based on the Hunger Games series. The story goes that Katniss was in hiding, we had to find her bow in "her house" and deliver it to her in one hour's time, or the evil President Snow will kill us all. Something like that. If you have always wanted to be part of the Hunger Games universe, this is your chance.

One thing that I liked about the game was the amount of details put into the game to make it as real as possible, rather than just going into a random room to solve whatever puzzles that you can find. The designers of the room tried to tie as much narrative into the set to make the game immersive — there were “writings” from the characters that tell their story — that make you feel as if you're one of the characters of the story. They did spell Katniss as Catniss though, which I suspect may have been an attempt to hide her true identity from President Snow.

The rooms were well designed with a lot of props that add to the authenticity of the game, though sometimes it may get a little confusing when you're desperate. As usual, the game proved to be well beyond our capabilities and before we knew it, we were already asking for clues just 10 minutes into the game. Note to self: If you're going to an escape room that is inspired by a popular story, be sure to know the characters' name well enough.

Despite our constant calls for help, the staff who helped us, I think her name is Hendra, was kind and patient enough to guide us through the puzzles whenever we got stuck, which is embarrassingly quite often. Despite that, we did manage to escape the room before the time limit, thanks to Sir Victor Goh Alot who has magic fingers with locks (he credits it to his NS experience) without exhausting our lifelines. Like the first time in my life.

Okay lah, must admit that we had quite a lot of help during the second stage of the game where Hendra literally walked us through the puzzles, which I must say was quite confusing — as there were two layers of puzzle built unto one — and may need someone with an IQ of 150 to be able to spot the solutions. Also, one of the clues were hidden in a dimly lit area that we would have no idea to look if was not for Hendra pointing it out. I guess that's part of the challenge in escape rooms. And hey, challenge completed!


It was an evening of fun and if you happen to be in the Arab Street area, do check Trapped.sg out. The pricing is quite affordable — around 24++ SGD — and the rooms were interesting and challenging. Worth the price. The most important part is that the staff are friendly, I remember going to one escape room where every staff was like a sour grape, which makes the experience much more enjoyable. There are several other different rooms as well, so be sure to check them out at their website: trapped.sg.