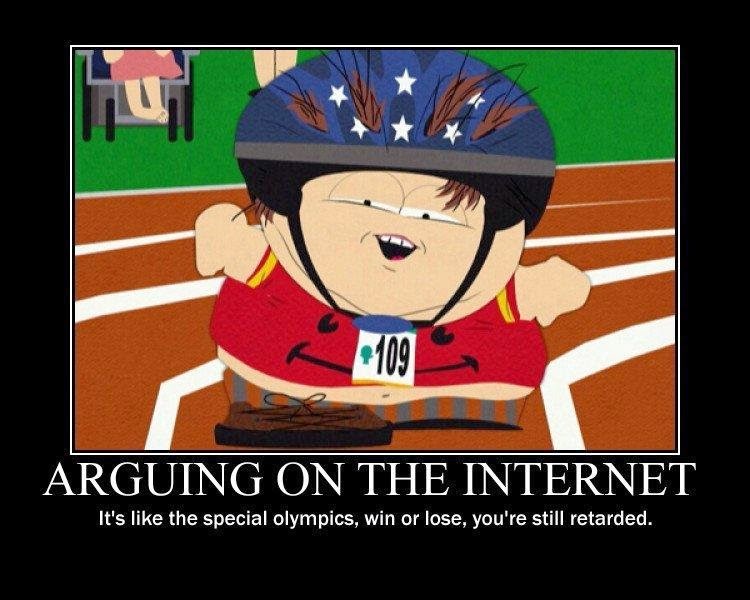 1. The longer I am on the internet, the more I realized that humanity's IQ on a whole is taking a downward plunge.

2. I mean just take a look at the comment sections and the kind of websites around the internet and you will get what I mean. You have people arguing over the silliest things and people believing in almost nonsensical things. Like the world is flat, global warming is fake and vaccination causes autism for example.

3. And when it comes to exchange of ideas or debates on the internet, things get even sadder. People are not debating to find the correct/best answer to a question, but rather they are arguing just to prove themselves right and others wrong.

4. It's like the outcome of the fight is already decided at the start and no matter what the two sides say, the two sides opinion would never budge. Finding someone who admits that they are wrong after a lengthy discussion on the internet is like trying to find the unicorn. It is just simply impossible.

5. I am not saying that there are none who engage in a healthy discussion though, I am saying that instances like this are few and far between. Often what I see is that even if one side is willing to listen and accept opposing viewpoints, the other side will often degrade into name-calling or insults when they cannot substantiate the point.

6. Worst still, often you will see people arguing on a completely different wavelength or framework. Which always lead to an inconclusive debate. Like the five blind guy trying to describe the elephant.

7. If I can conclude anything, I would say that at the end of the day, the majority of us have this morbid fear of expressing that we might be wrong on the internet. Or worst still having to apologize. Which may explain why we may go to great lengths to argue just to prove ourselves right.

8. Not only that, even though the internet is filled with information from opposing sides of an issue most of the time, we tend to gravitate towards information that supports our belief, without considering the points from the opposing side. And that, I think, is the biggest flaw in our society today.

9. Nowhere in the education system are we taught that it's okay to have wrong beliefs sometimes and that we need to constantly examine our beliefs to make sure that they are accurate. That we need to be critical of ourselves.

10. There is so much emphasis being put on us being right, that it is the utmost importance to prove ourselves right, that you see this being manifested most obviously on the internet.

11. Which is scary, because even though we might say a lot or type a lot on the internet, we are not really listening to other people's point of view. We are not trying to understand the perspective of others. We are merely letting the other party talk so we can hammer down our beliefs down their throat. If given a chance, we would just force our opinions down the person's brain and make them agree to our points. I guess it's because we enjoy people who shares same thoughts as ourselves.

12. There are many idiots on the internet that operate according to these beliefs from my observation. You have the religious idiots, the pseudo-science/psychology idiots (climate change, vaccinations), political idiots and self-taught expert idiots. Not to mention the MLM idiots who continue to plague my World Ventures post all the time.

13. Perhaps growing up, there is so much emphasis given on us feeling good that we are so terrified to feel bad, so we go to great lengths to avoid feeling that way. Which includes completely avoiding opinions that differ from us and shooting them down as fast as we can when they appear.

14. I think this is something that is seriously unhealthy in our society today and it is something that needs to be seriously addressed. Or else all of us will continue down the spiral of stupidity as we all refuse to consider opinions that differ from us while guarding our own as zealously as we can. Even when that includes selectively picking data that fits our opinion (no matter how stupid they may sound) and discarding those that don't fit our beliefs (no matter how credible they are).

15. Take the climate debate for example. There are those who go around saying that the lack of change in temperature is a prove that global warming isn't happening, even though there are tons of different other proofs and explanation for the occasion. Or those who keep harping on the discredited research that linked autism to vaccination, even though the doctor has been discredited.

17. I think to move humanity forward, national education has to be changed to a way that on the first day of school, the teacher will walk into the class and say, "Now what I am going to teach you may be true today, but there might be a day where the things that I teach may be false. I may be wrong on facts sometimes too. The important thing here is to never stop questioning and not to be afraid to admit that you may be wrong sometimes."

18. It sounds radical, but I believe that a society that is not afraid to question itself is the society that will make the most improvements.

19. Of course there are many other factors to consider when it comes to arguments, believes and changing opinions, but the focus of this post is on the importance of critically examining ourselves and the seemingly lack of it in the realm of the internet. I may be making a video on people arguing on the internet and how our beliefs may differ from each other (I would like to call it circles of importance) next.

20. This post is going to be littered with grammatical errors, but I am not doing this as a full-time job and I am posting it as a first draft. Because YOLO.