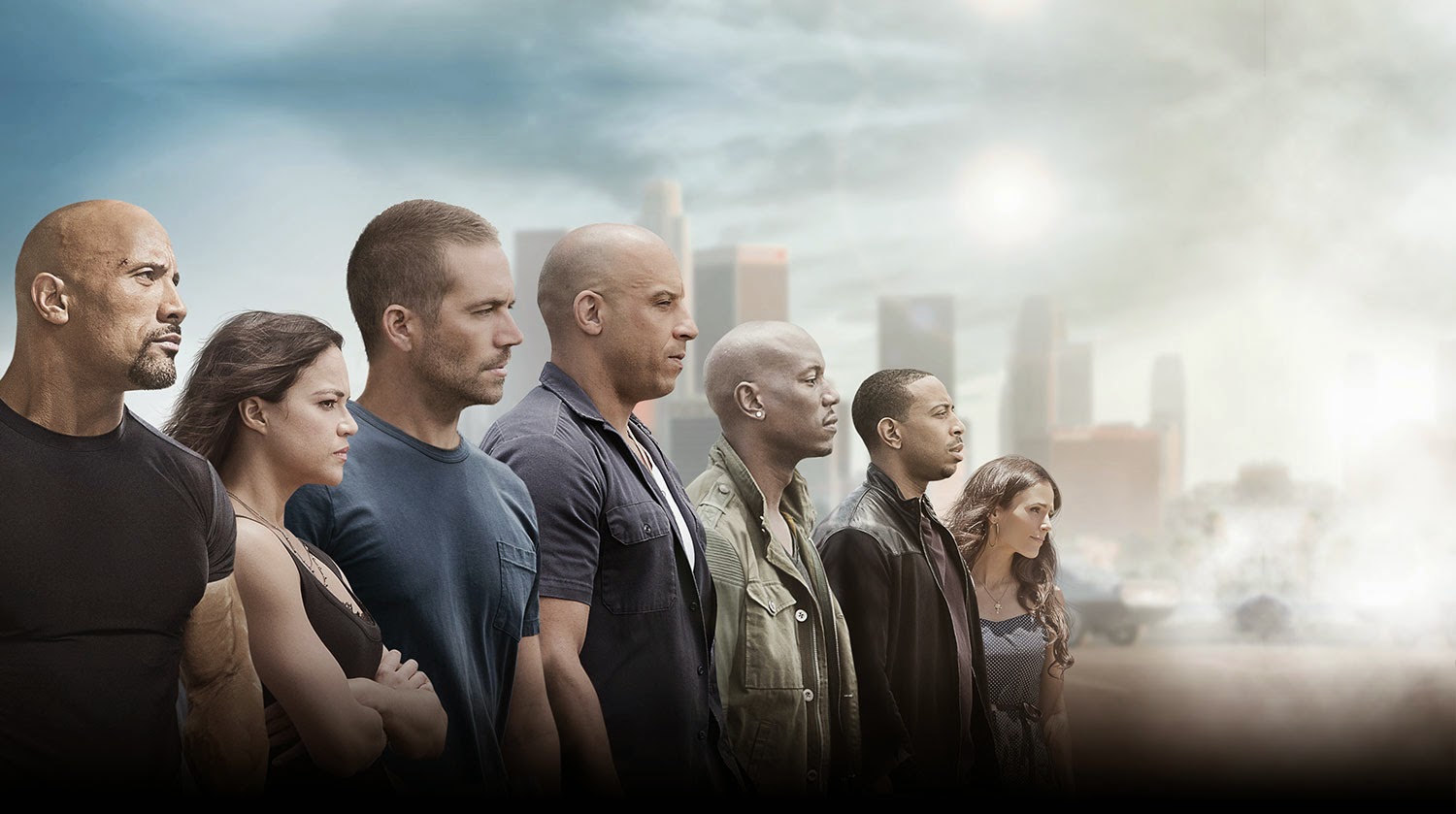 1. With all the hype going around this movie, I decided to finally watch this movie. Best thing is that I managed to catch the girlfriend to watch it too, who initially has no interest in movies about cars and action. Not even The Rock Dwayne Johnson. Achievement unlocked, I guess. Converting girlfriend into watching Fast and Furious series.

2. We actually watched Fast 5 and 6 one day before watching the 7th one. Just to introduce her to the characters and a sort of backstory. Didn't watch the entire franchise of course, because that will just be too long

3. Of course, the ending of the was already spoiled thanks to all the articles/statuses popping up in my news feed that praised the "sending off" of Paul Walker, but I still wanted to see how the movie does it, given the amount of attention that surrounded it.

4. My biggest complain about this movie, even before watching it, has to do with the killing of Han. And also Giselle. They were the couple whom I enjoyed seeing most on screen, whom I thought has more chemistry than Dom/Letty or Brian/Mia. Which is why I will forever hate the person who wrote the script for Tokyo Drift and decided to kill Han.

5. Another complain that I have has to do with the absence of the two brother characters in Furious 5 too. They brought a lot of comic relief and flavour to the Fast 5 movie, and somehow the dynamics of the team is just not as enjoyable without them around.

6. Overall I still find the movie enjoyable to watch, maybe because I'm no physicist and did not know which physics law was broken during the entire filming of the movie.

7. Of course there were bits and parts of the movie that felt disjointed, but I guess it was because they had to fill in the gaps of the story after Paul Walker's death. Still the general flow was okay.

8. Corona poured a lot of money for the product placement in this movie, but neh. I still prefer my hard liquor over beer any time. Especially over Corona.

9. The girlfriend cried when they showed the tribute to Paul Walker, but somehow the feel just didn't hit me. I guess maybe because I was expecting a real tribute that involved behind the scenes footages and somehow the movie one felt a little staged.

11. That being said though, I really hope that if they really make an eighth movie, it will be the last. The characters keep talking about family but from how I see it the family just keeps getting smaller without new faces. And that means less new things to see and the dynamics is getting stale.

12. I still enjoy watching the Rock being all badass though. Maybe it's because of his name that I like his character so much. Luke Hobbs. Like Luke the badass Hobbs. Mine is Luke the handsome Phang.

13. My favourite Fast and Furious movie is still the fifth one though. Maybe because there were more character development in the movie and the focus was aligned with Dominic's value, which is family. It was enjoyable watching how each character bring their style and flavour to the team.

15. The final boss fight of this movie feels a little bit downgraded as compared to 6th though, where they had to wrestle with a frigging plane. This movie just has a helicopter. Which like don't really do much. Except missing all their shots and getting shot down eventually

16. The Rock is so badass that even when he's shot at using a minigun from a helicoter, he has this aura that deflects bullets away from him.

17. Is it me, or is there a lot of ass shots in this movie? Not that I am complaining though. I just wish I have that kind of Abu Dhabi life. Oh well.

18.I half-expected Dominic to shout off "I am Groootttt!" during any of his fight scenes.

19. Professional trained soldiers will all become stormtroopers when the movie wishes it. Like during ambushes and stuff.

20. I just hope they won't make another Fast and Furious movie. This franchise needs to die off while it's still in its peak. Seriously.