Why I Disagree With the Christian Notion of Wives Submitting 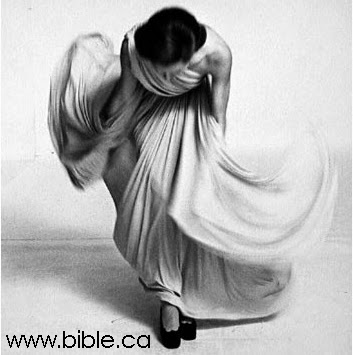 So Dawn and I had a very interesting discussion a few days ago. One that did not end conclusively because I'm not the type of person who can debate or argue well in a face to face conversation, and who needs time to think out my thoughts and pen it all down. If I do try, normally what comes out would be filled with stutters and awkward silences. Not the eloquent speaker, I am. Kinda makes me the ideal candidate for a Toastmaster membership, I guess.

Anyways, the topic was on submission, specifically from a Christian point of view, where women were called to "submit" to their husbands in the bible. Now I put the word submit in quotation marks because the world could mean different things to different people, depending on how you interpret it, but generally it could be understood as listening to your husband and perhaps following his instructions. The husbands should be the head of the house, as how some say it, meaning that no matter what the husband says, the wife must follow.

Taken to the extreme end, what the husband says is the law, and at the end of the day, the decision made by the husband, no matter what they might be, must be accepted by the wife, whether she likes it or not. This is the whole point of submission. You give up your personal preferences to follow someone else's.

To be honest, I never liked this idea of "submission to your husband", even though I might be a Christian who happened to be a male as well. I find the entire idea to be too vulnerable to abuse, which could be used as a weapon for abuse. When one side has to submit to another side, the balance of power in a relationship has been skewed, suggesting that one side is superior to the other, and that the inferior side has no rights to be heard. The equality is lost. Sure, you can ask the husbands to love the wife or something like that, but a certain bias already exist in the framing of a relationship.

Submission. There is really no need for me to explain what kind of emotions the word evokes when it is mentioned. It is a word that can be used to discriminate, alienate and abuse. It implies giving up your rights and to follow meekly. There is no fighting back. One side's opinion is superior to the other side's. The one that has to submit is weaker.

And that is not love, in my honest opinion. In a relationship where there is true love, the idea of asking your partner to submit to your whims and wishes sound totally unfair, and unloving. When you love someone, of course you want their wishes to be heard, and you would respect their thinking. To end off any discussion or arguments by asking them to "submit", which I think many males will use it when they can't win a fight, is extremely chauvinistic. It is derogatory. It requires your wife to obey. And that borders on slavery, not love.

"But it was written in the bible!" was one of Dawn's first argument when I first voiced my uneasiness of having her to "submit" to me. I felt selfish, even childish, to expect someone whom I consider as my equal partner, someone whom I value her opinions for, to "submit" to me. But she does have a point, one that I am uncomfortable with, which was why I kept quiet and did not let the argument go any further. But as soon as I reached home, I opened up Google and did a quick search on Bible verses talking about a wife submitting. I had a hunch, and it turns out that I was correct (at least according to Google).

You see, when Dawn first mentioned about submission being a part of the bible, my first reaction was "Surely Jesus didn't say this!" I mean, for someone who champions love for all, irregardless of anything, asking wives to submit seem to stick out like a sore thumb. And it turns out I was right. Unless Google is telling me wrong, nowhere in the bible did Jesus ask wives to submit to their husbands. 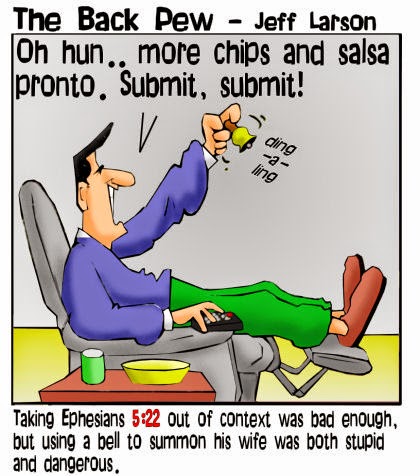 In fact, the call to submit came from two apostles instead, Paul and Peter, in the books/letters Colossians, Ephesians and 1 Peter. I take issue with that, because despite being apostles as they are, they're still humans like us. And humans like us, tend to have a certain set of bias and values we identify with. That is what makes us human. With the message coming out from their mouth instead of Jesus's, a reasonable doubt can be cast unto it on how much was it a part of God's message. If submission is all that important, wouldn't Jesus have mentioned it in his teachings?

Incidentally, my company was having this discussion on Women's Charter today, and a point was raised about seeking maintenance fees or alimony from husbands once you divorce. Did you know that according to the Charter, which is enshrined in the law by the way, only women can seek compensation from the man, not vice versa?

Of course with our Asian perspective this might not seem counter intuitive, as men are seen as the stronger gender which needs to protect and women are seen as the weaker gender, but society is changing. From the discussion, the lawyers illustrated several interesting cases where the man who were the ones discriminated against, where they were forced into a disadvantaged position because of the Charter? For example a man who chose to become a house-husband so that his wife could pursue her high flying career, only to be dumped when she wanted a better man, and could not seek maintenance because the Charter does not allow it, while letting the women do so.

Society is changing, like it or not, where women are moving into more privileged positions, where they are getting more education, and the gap is narrowing, A point raised during the discussion, which I truly agree with, is that back when the Women's Charter were drafted out, women were in a disadvantaged position, and there is a need for the law to take their side. But now that the gap is narrowing, the Charter does not seem to be serving its original purpose as well anymore, because it may be unfair in some cases, especially in the ones where the men are at a disadvantaged position.

The point that I am trying to make is this. While Jesus's lessons are time enduring, perhaps the same could not be said about the apostles' viewpoints. Like it or not, their perspective may be heavily coloured during the time that they were living in, a highly patriarchal society, and it may cause them to push for certain agendas, such as submission to the husband.

I'm not saying that it is wrong, but what I am saying is that the message may have fit the context during that time, but just like the Women's Charter, as society progresses, so do some needs and dynamics change as well. And even though they were in the bible, do bear in mind that these were letters written to churches during that particular set of time, almost 2000 years ago. What may fit the church then, may not fit now, and if you want to argue about following what their letter recommend, I would suggest you leaving your air conditioned church and stick to the outside instead, like 2000 years ago. And you should not forget that those letters were picked specifically by HUMANS to include into the bible, and like it or not there might be bias, not matter how small, involved. Because we humans can never be truly objective.

To me, what's more important is Jesus's teachings instead. Sure, the apostles letter may serve as a great guideline, but they should not be the law and backbone of our faith, that we don't need to follow to the letter, not especially when we can't even get Jesus's basic teachings right.

You see, the one thing that Jesus did mention about relationships, in marriage, was that a man should never divorce his wife. And that I think takes precedence over every single other thing that the apostles said, because it came directly from Jesus himself. And yet we choose to focus on other minor details such as submitting or LGBT when we can't even get this right. Divorce rates are still soaring the last time I checked, and how many of us actually pay emphasis to this divorce portion? How many Christian marriage counselling classes actually teach couples conflict resolution styles, the importance of staying together and the impact of divorce?

And Jesus did not say this out of a whim though. Divorce has been shown time and time again that it has negative impact on the child, it ruins the family structure and affects the child as he/she grow up. It has a proven scientific adverse impact. And I believe Jesus knew this, which was why He said it.

On the other hand, how many studies have come up showing that a wife not submitting had caused marriages to break down? I believe holding such distorted views that your wife should listen to whatever you say, may have a higher chance of causing a marriage to break down. Because when you do not let your wife speak up, wouldn't there be a lot of pent up unhappiness and tension? And by letting this happening, wouldn't you be breaking the law that Jesus mentioned?

What is more important anyway? Following what Jesus said, or following what the apostles mentioned in a letter that was never directed to you? We Christians have this tendency to home in on small details, and let it fill all of our attention, until we often fail to see the bigger picture.

Yes, Paul and Peter did mention that wives should submit to their husbands, but I believe that the message was intended for a time different than ours. Jesus always said love one another and treat one another as how you want to be treated, and in a relationship, I want my opinions to be heard and respected, which is why I am going to hear and respect my wive's opinion too.

Well intended as it may be, I believe the message of submissions is too vulnerable and could be easily distorted, and it reinforces a certain sexist stereotype in society, like it or not. It has nothing to do with what you want, because the word itself has certain connotations attached to it, and introduces it own bias. I believe that true love is where both the man and the wife is equal both in love, position and opinions, in that none of them is superior over the other. Because the only person that we should listen to in a relationship is God, not anyone else. He is the one who is truly superior, not the wife, not the husband.

And like what Genesis says, both the man and woman "shall become one flesh", and I think one flesh implies that both are equal, with the same rights and position. And that is why I disagree with the idea of submission.