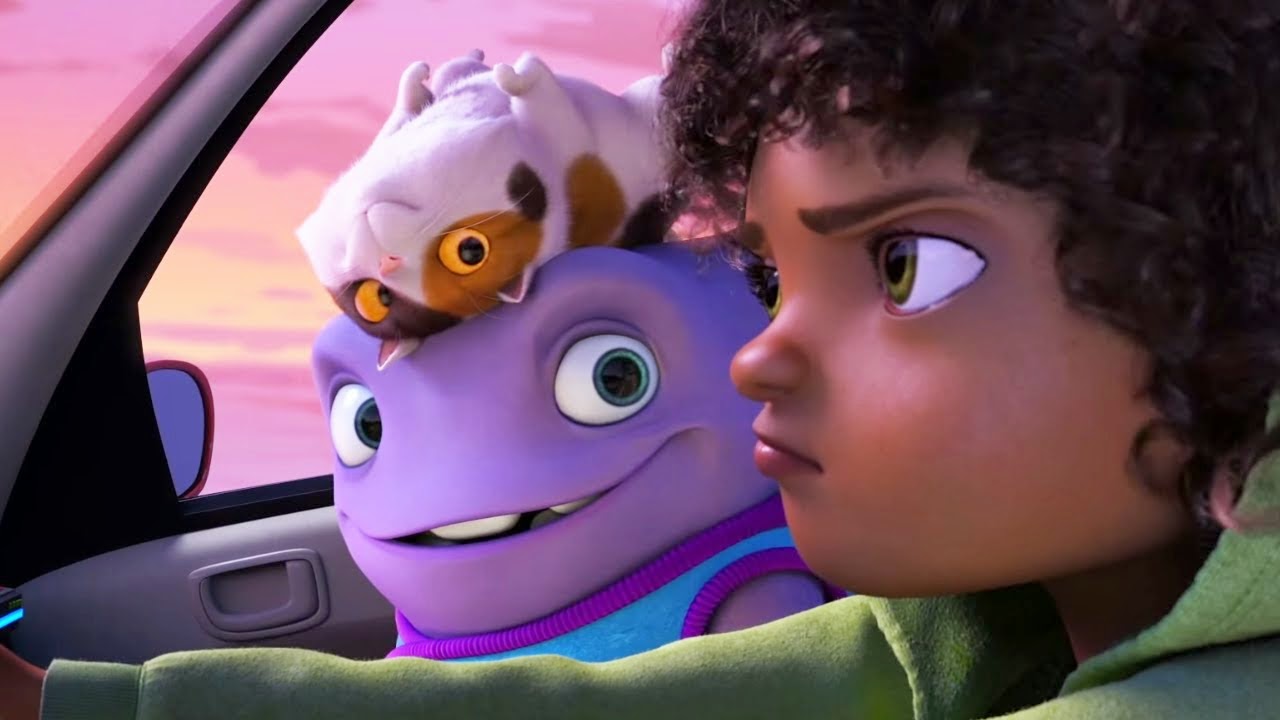 1. Out of pure spontaneity, Dawn and I agreed to drop by the cinema to check if there was any movie that we could catch, seeing how we have been wanting to watch a movie for quite some time already.

2. There were few movies on screen, but we only considered two: Home, the new alien movie featuring a socially awkward purple misfit and Cinderella, Disney's latest rehash of the classic story.

3. We eventually settled for Home, even though our original intention was Cinderella, because none of us was really keen for it. I personally would not prefer to watch something that I already know the ending to, as well as the story, while Dawn did not think that the actress is pretty.

4. So we stepped into the cinema, the tickets to Home in our hands, not knowing what to expect. Except for the brief trailer that we watched sometime back, of a clip of Oh - the alien - dancing to the tune of a song in the car.

5. Fortunately, the movie turned out to be quite pleasantly entertaining despite its simplicity in story and not so funny jokes. I mean they were okay, just that they did not make me laugh until my tummy ached. And I think the focus of the story was on how the relationship between Oh and Tip, the human girl, blossomed.

6. I would say that this is the one of the movie that gives you the warm fuzzy feeling at the end of it, a warm approach in exploring how an outcast alien tries to build a relationship with a human girl, and how they both come to understand each other's culture and thinking. Quite interesting to watch, the interactions between them.

7. Some of the plot twists were predictable, some were not, but nevertheless it kept me entertained until the end.

8. The sound tracks in the movie were nice too, there were a few MV moments where there was no dialogue and just song, which I thought filled the movie quite nicely, and added colours to the story telling technique.

10. Jim Parsons, better known as Sheldon, was the voice behind Oh too. And I think he did wonders with the character. In fact Oh shares a lot of similarities with Sheldon in being socially awkward.

11. The movie is aimed for children, but I think adults can equally enjoy the movie too with the variety of colours, uniqueness of the story and general feel of the movie.

12. Only when I found out from Google that the movie was based on a novel did I know why it was so entertaining and pleasant to watch. Because the movie makers had already a story to start. Still the way they set the scene in the movies was pretty and colourful. Would definitely recommend this movie to watch.

13. Dreamworks seems to be a force to be reckoned with today, uh. I am just glad they stopped milking Shrek.

14. I am travelling to Osaka in June! Can't wait. And like a childhood dream came true!

15. Gotta get myself a men's travel bag to look trendy though during the trip.

16. It will be my second East Asian trip, the first being Taiwan last year. Still much of a travel noob, and this time will be taking Cathay Pacific and stopping over in Hong Kong (connecting flight!) so I will see how that goes.

17. Also using Airbnb for the first time too! At least it's not CouchSurf. And Japanese hosts! Fingers crossed that there's no awkward moments.

18. In other news, Lukey is foreseen to go broke.

19. In other other news, I discovered the joy of Hootsuite and the magic of tweet scheduling. So awesome right? And dumped my first 5 bucks into Facebook advertising. Hopefully I will be a popular blogger by then! #yeahright