At The End of Everything #34 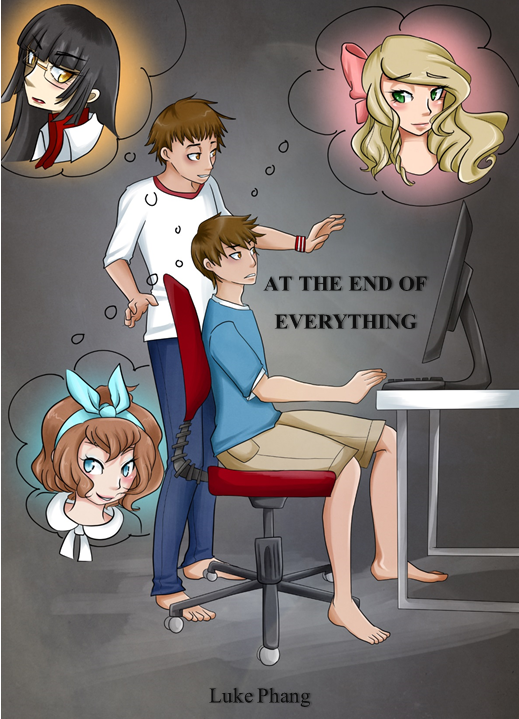 I felt strange, as I stood in that hallway, looking down the rows of doors. Dull fluorescent lamps hung above me, arranged neatly in a line, going down the hallway. The place felt strangely familiar. My body seemed to recognize the place, as if I had been there numerous times before. The was a rush of excitement inside of me.

A bright brown door beckoned at me, as I let my feet carry me there. On the door, a bright blue sign was plastered unto it. The name Elaine was written on the the sign, its strokes and curves painfully familiar. A pair of slippers, shoes and heels lined the floor, along with a Snoopy carpet, with a big ‘Welcome’ written on it.

I had no idea what came over me, but I pounded on the door with all of my strength. Harder and harder. Hoping that it would open up. Even though I had no idea what I was hoping to find. I opened my mouth, yearning to scream out her name. To my horror, the voice that came out of my mouth was not mine, and the name not Elaine’s. Rather it was a girl’s voice, calling out my own name.

I slowly opened my eyes, blinded momentarily bright yellow light that shone from the ceiling. I found myself on an unfamiliar bed, in a small and lightly furnished room. Someone was pounding loudly on the door, shouting something, while someone else was calling my name. I turned to see a girl at the corner of the room hastily picking up her clothes and putting them on, while shouting for me to do the same. It was only then that it everything came back to me, where I was, what I was doing. Mr Chen, Elly, Geylang, I suddenly remembered.

I sat at the bed, half confused and half dazed by the entire situation. The pounding on the door annoyed me. It felt barely a while since I last fell asleep. Only when I finally caught the word that was being shouted across the room, coming from both the door and Elly, did I began to grasp the kind of situation that I was caught in. Panic kicked in, as I began to scramble around looking for my clothes, and putting them on hastily. After all, I have had no experience on having the police banging on my door before.

The pounding became more incessant, as the police demanded to be let in. There was even a threat about breaking the door.

When I finally opened the door, Elly tugging at my arm, I was panting and confused.  Standing before me were three men, one in the standard dark blue police uniform that I usually see on patrol, while the others wore a dark blue vest over their polo tee. Their face was stern, serious.

Behind them, I could spot other policemen checking on the other rooms as well. Mr. Chen was standing at the entrance of another room, just a few rooms from mine. He was covered in a towel only from his waist down, and seemed more irritated than scared at the sudden police raid.

The policeman in the uniform demanded for our identity cards, which I handed over quickly to them. Elly fumbled with her purse, before eventually handing over what looked like a work permit. The police studied our cards, whispered something among themselves, and proceeded to scribble down something on a piece of notebook.

It was the first time that I had ever experienced a police raid, let alone in some sort of brothel. Most of the time I only heard of it from friends who went clubbing. There was a feeling of fear inside me, as I wondered how long the entire process would last, and what they would do to us. Elly gave me a worried look, all the while hanging tightly to my arms. I whispered her that it was going to be alright, and rubbed the back of her hands. I tried to smile as well, but it turned out rather unconvincingly.

After what seemed like a few minutes or so, the police handed us back our cards. I thought that it would be the end of everything, and that we could go back into our room. Fat chance. The officer in plainclothes motioned to the side, and another two policemen came to us, both in uniform, one female and the other a male. The policewoman motioned to Elly, and asked her to follow. I wanted to ask where she was going, but the other police officer stood in my way. He pointed at me. “Sir, I need you to follow me.”

“What, why?” I immediately exclaimed. I saw the other patrons being led out as well, separated according to gender, in a single file. The mood was tense, and no one dared to make a sound except the police. Some of them were looking in my direction, perhaps admiring my bravado at speaking back to the police.

The policeman in front of me looked unimpressed. His eyes fixed boringly against mine. “Either we can do this the hard way, or the easy way. Hard way being I press charges against you for disobeying orders, and easy will be you stepping in to the line with the rest of them,” he said sternly, and angled his head towards to rest of the other patrons. His hand reached down to his pockets, and revealed a set of silver handcuffs dangling from it.

I looked towards the two lines of people walking towards the exit, and then back to the officer. Realizing that I did not have much of a choice, I reluctantly dragged my feet to the male line, and put my hands on the shoulders of the guy in front of me, just like what everyone else is doing. The police shouted for us to get a move on, and not to cause trouble. Looking at how quiet we were, none of us were thinking of causing trouble.

I would later find out that the reason why the police raided the area was because the girls at the place were holding fake travel documents, and the entire place was illegal. Not entirely suprising for Mr Chen to visit places such as this.