I've been wanting to go to Kusu island for the longest time, ever since reading about it online. It is one of the few islands off Singapore that you can explore without having to bring out your passport, and it is not as mainstream as Sentosa or even Ubin. The pictures online portrayed it to be an exotic and beautiful place as well, with mentions of tortoises and temples on an uninhabited island. The pictures themselves reminded me of places like Taiwan or China rather than Singapore.

Which makes it more the attractive, since I'm a sucker for cultural places like that.

However, directions on how to get to the island was vague at best, or outdated. so I never found the courage to attempt to venture unto the island, plus it was not easy to find someone who was as spontaneous as I am to island hop. Which was why the island remained mostly as a unfulfilled wish, sitting on my to-do list for the longest time ever.

But luckily for me, having a girlfriend does has its perks, and Dawn agreed to accompany me on a short trip to the island. So after doing whatever research that we could (like how to go there), we set out on a fine Saturday morning (Jan, 2015) on a trip to one of Singapore's Southern Islands.

Getting to Kusu Island was relatively easy. With the new Marina South Pier MRT station, all you need to do is to take the red line all the way to the end, head to Marina South Pier, and get yourself a ticket costing 18 SGD each at the Island Cruise Counter. 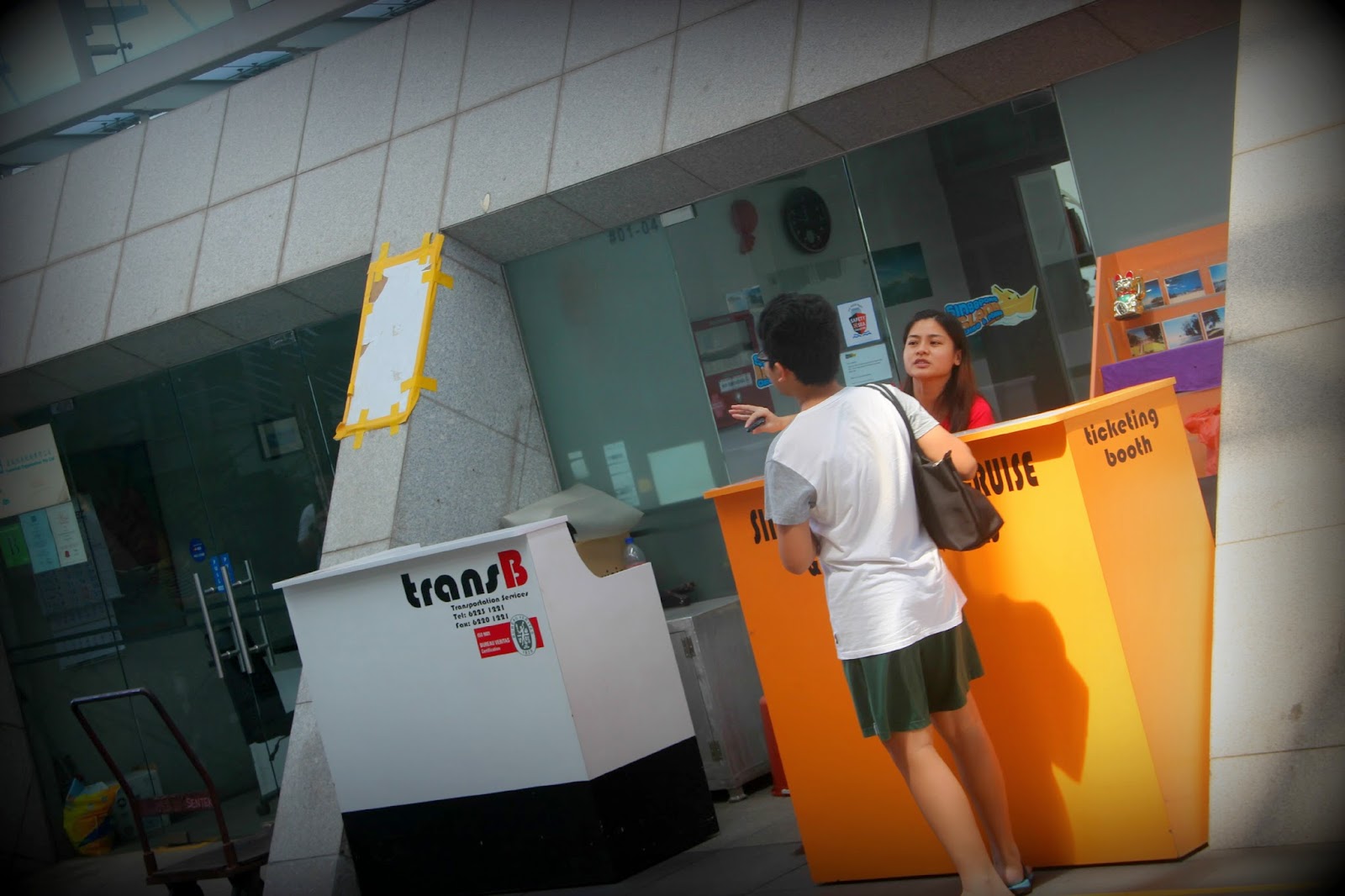 Their ferry services cater to both St. John's Island and Kusu Island, so if you plan your timing correctly, you'll be able to visit two islands on the same day. However, since the both of us got the timing for the departure wrong (turns out the ferry schedule varies daily), we decided to just settle for Kusu Island for the day. The ferry that we boarded looked very much like the ones we took to Batam, and their travel in a loop from the pier to St. John's and only then to Kusu.

It took us around 30 minutes to reach St. John's island, and along the way we were treated to numerous scenic sights that you could only get when you're on the sea. It was quite an eye opening experience to be looking at Singapore from a different angle. 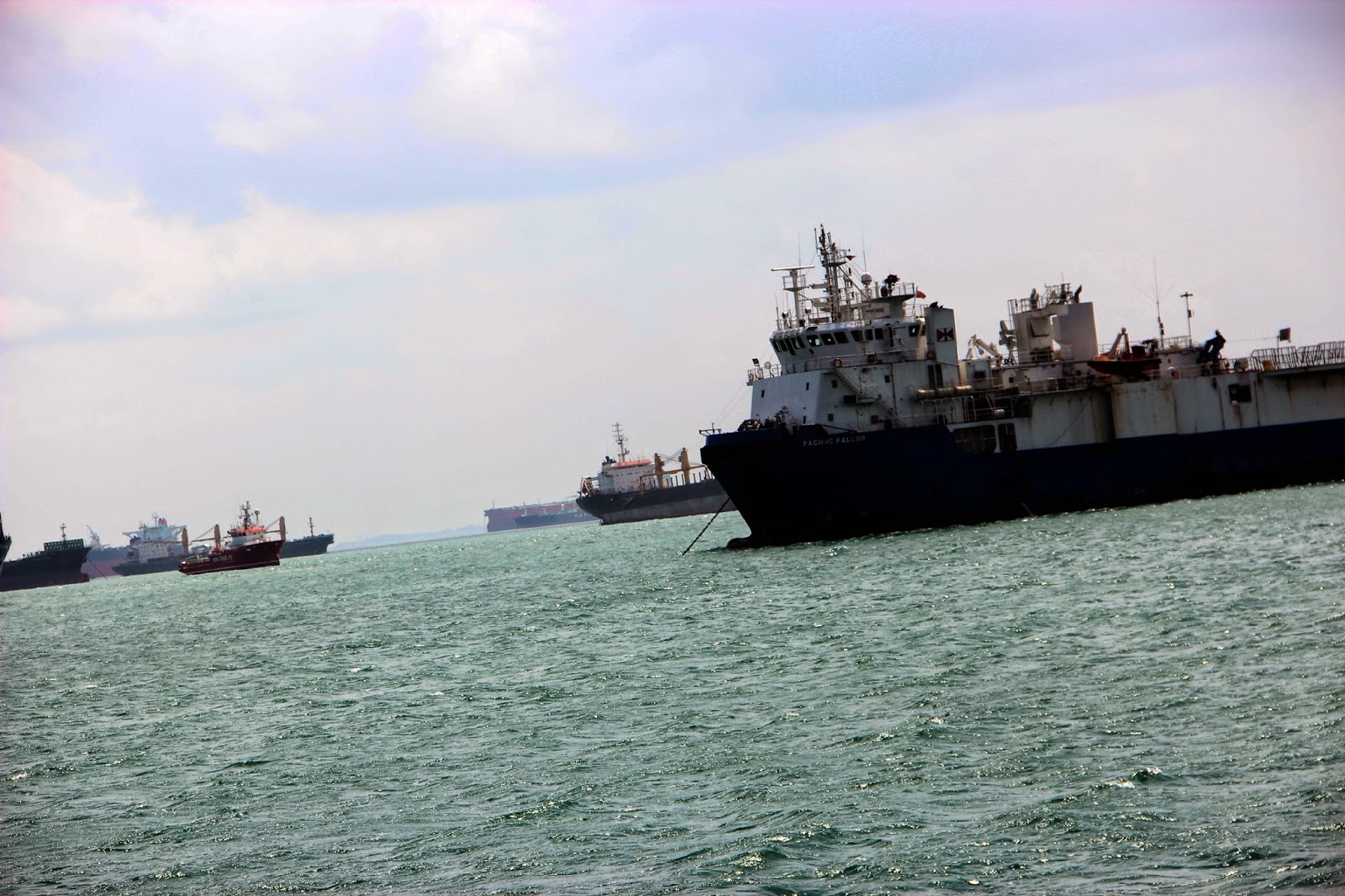 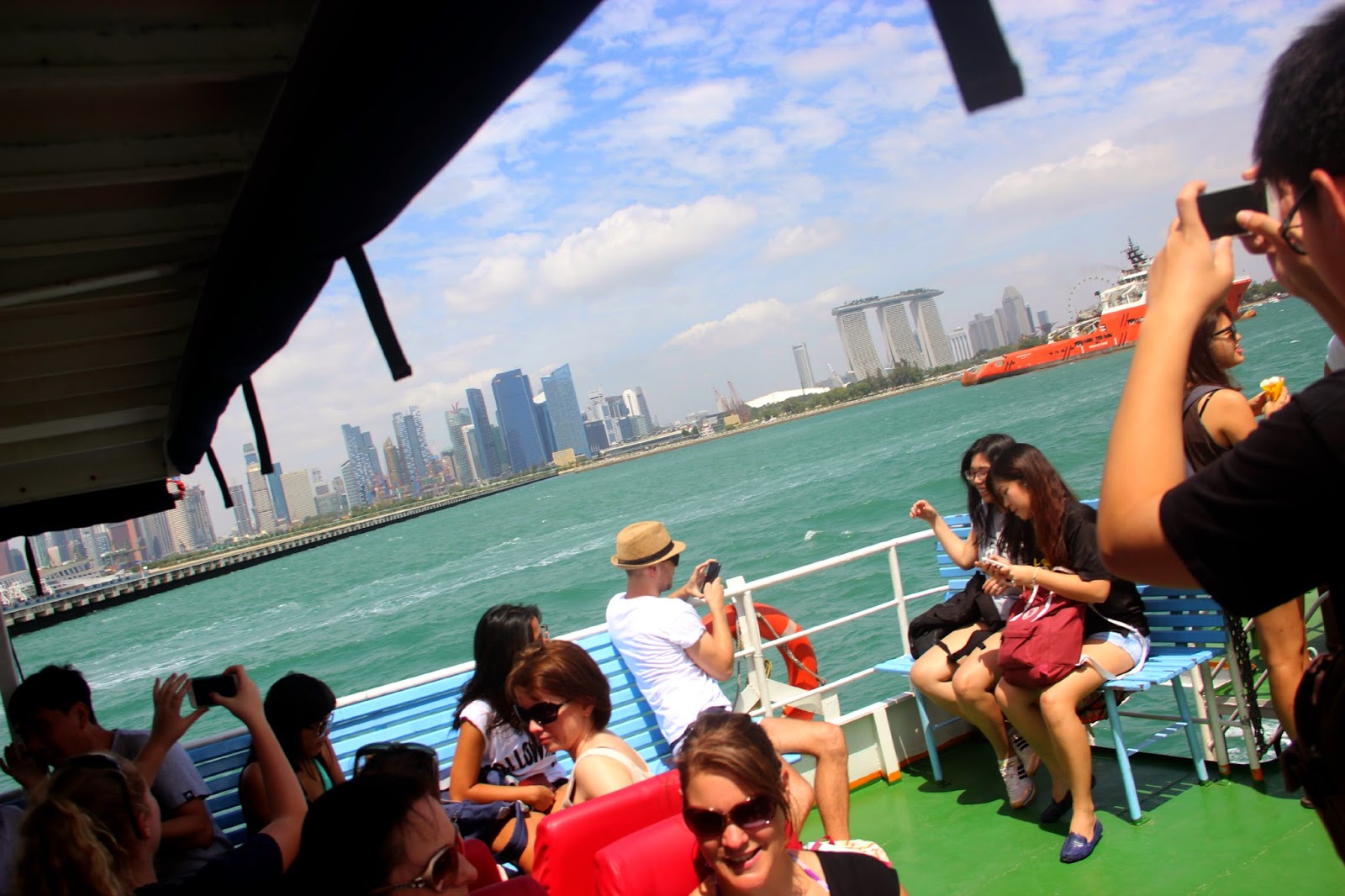 We also managed to catch a glimpse of St. John's island while on the boat, which surprisingly turned out to be much larger than what I expected. Both of us agreed that the island warrants a second trip back in the future, as it seemed like there were numerous things to explore on the island. 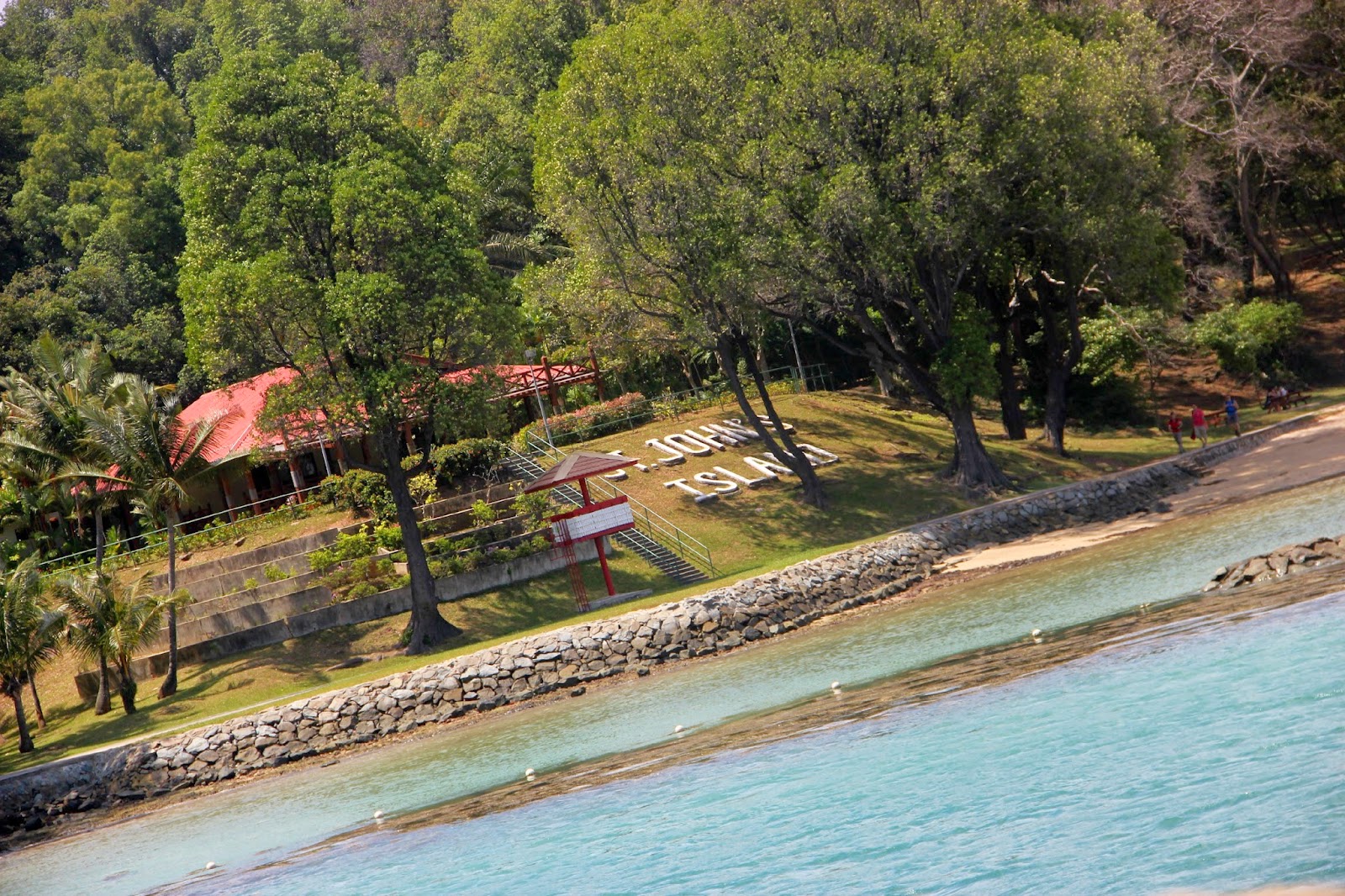 The trip from St. John's to Kusu took another 10 to 15 minutes, and when we arrived at Kusu, well let's just say I was quite taken aback by the size of the entire island as compared to St. John's. 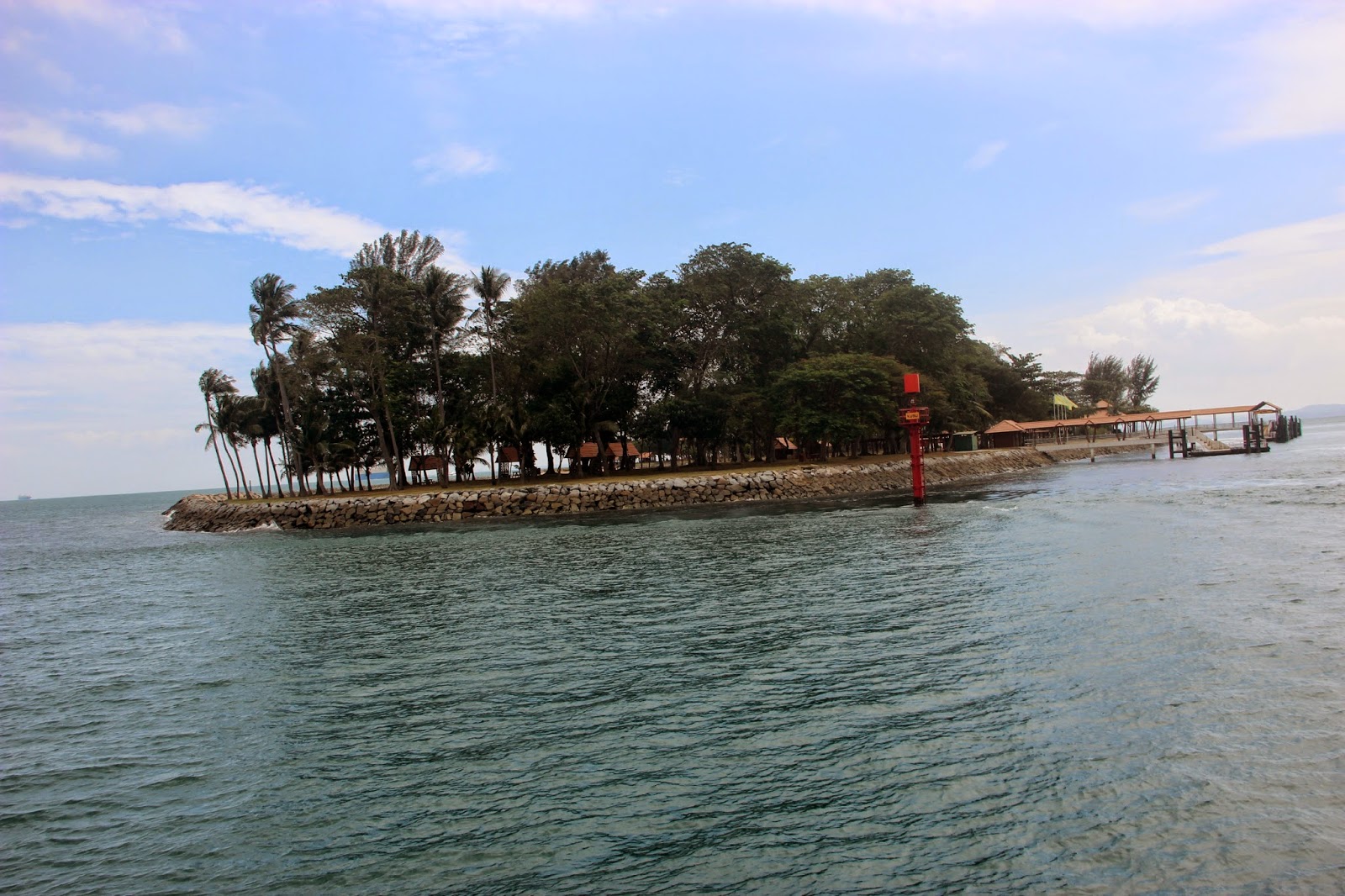 Of course, it was not fair for me to have any expectations at all, but judging from the pictures and description online, I pictured the island to be much bigger than what I saw. As in you can pretty much see the whole island with a simple sweep of the eye, and it looked more like a small park than an island where thousands of devotees would flock to as what the website claimed.

Still the island looked quite beautiful and tranquil, from how it sit amidst the blue waters around it, with the trees swaying gently in the wind. 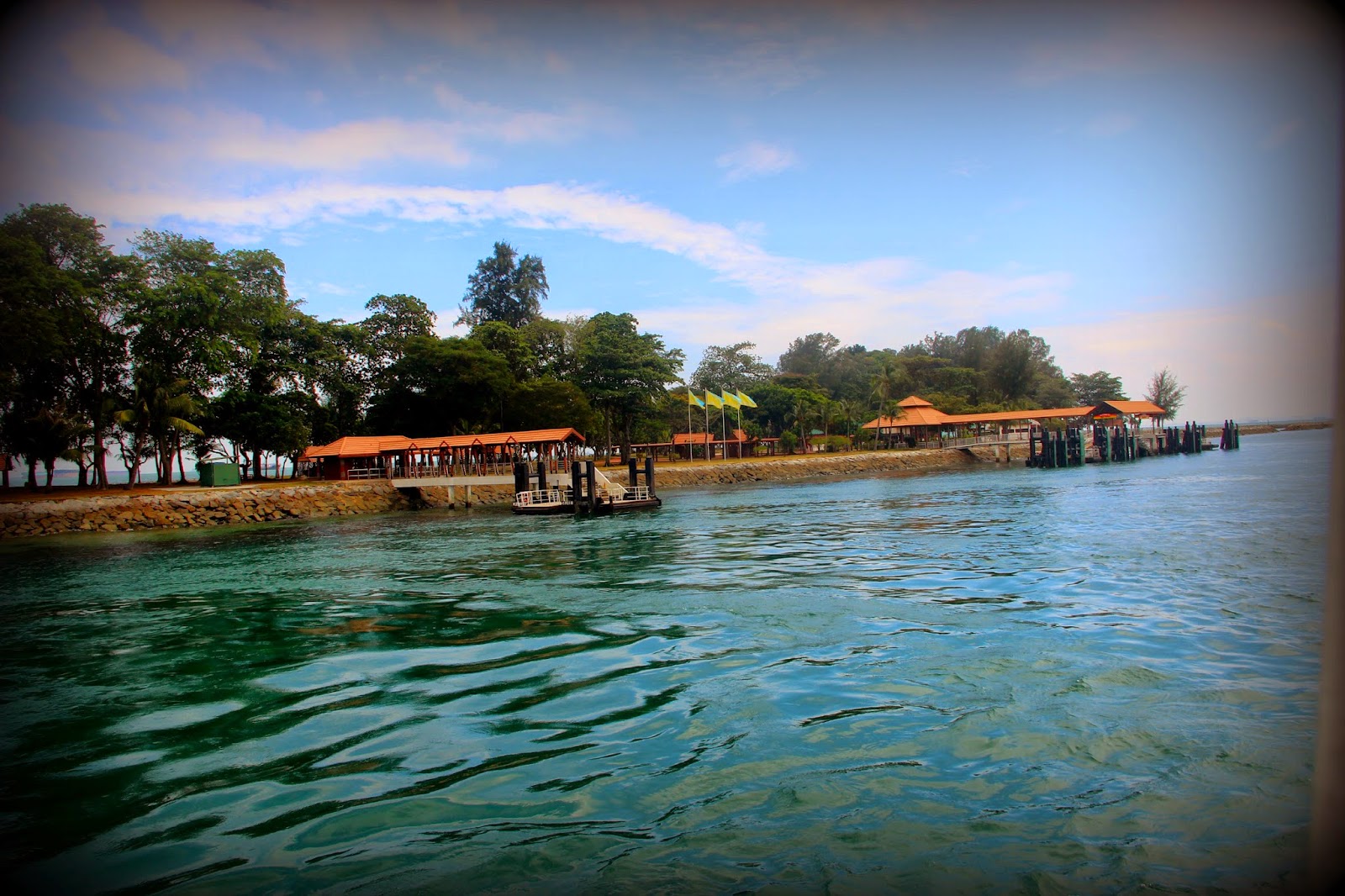 The place itself was not too bad. Surrounded by sea with brick layered paths laid throughout the island, accompanied by park benches and tables, and small wooden huts, the island reminded me of East Coast Park. The general serene and nature feeling, with the sight of sea around you. Minus the crowds, of course. It was quite a relaxing place, to just walk around, chill and have a breath of fresh air. A good place to have a picnic with your friends or family, as well as a retreat gathering, with the numerous facilities around. 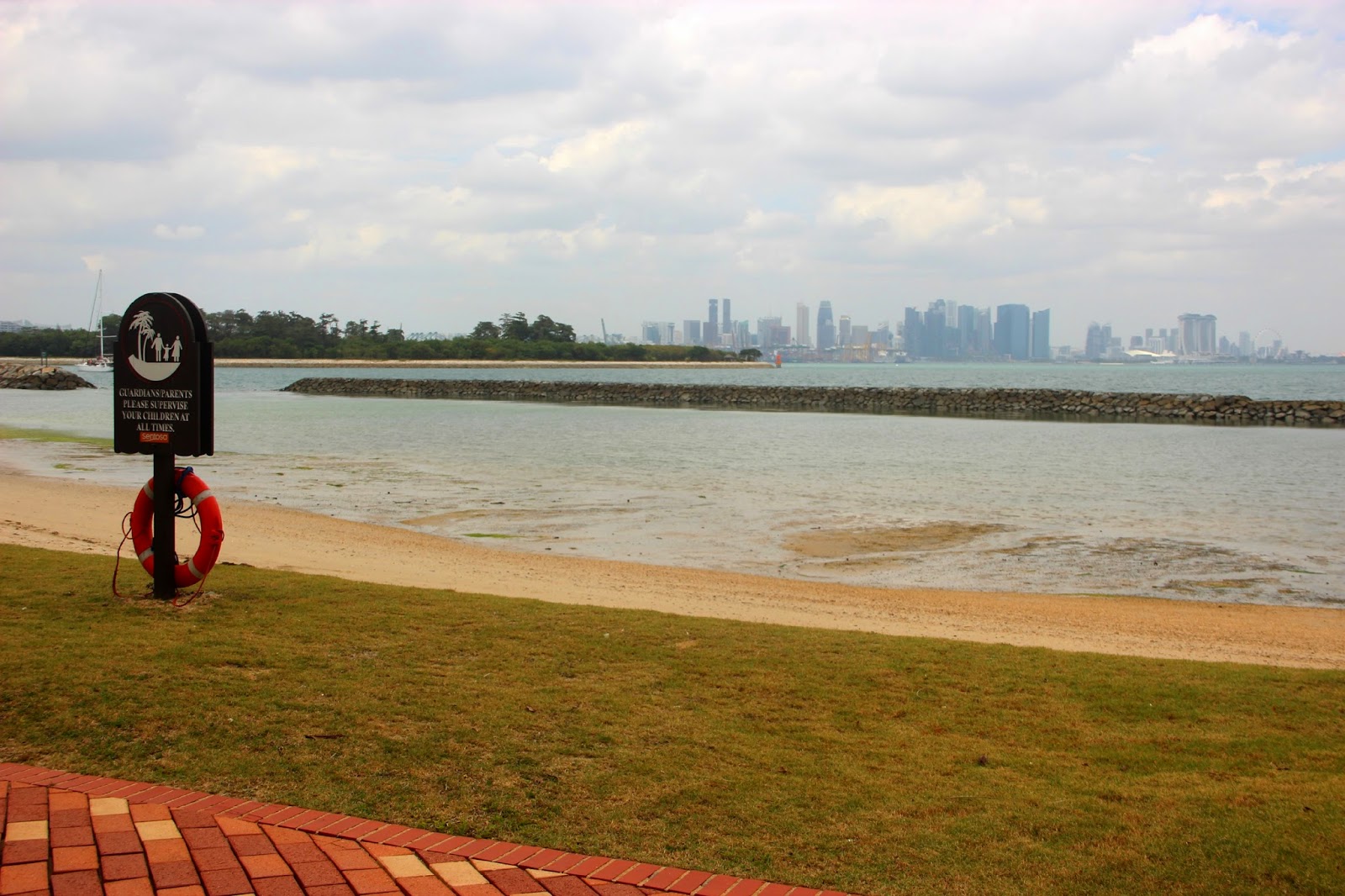 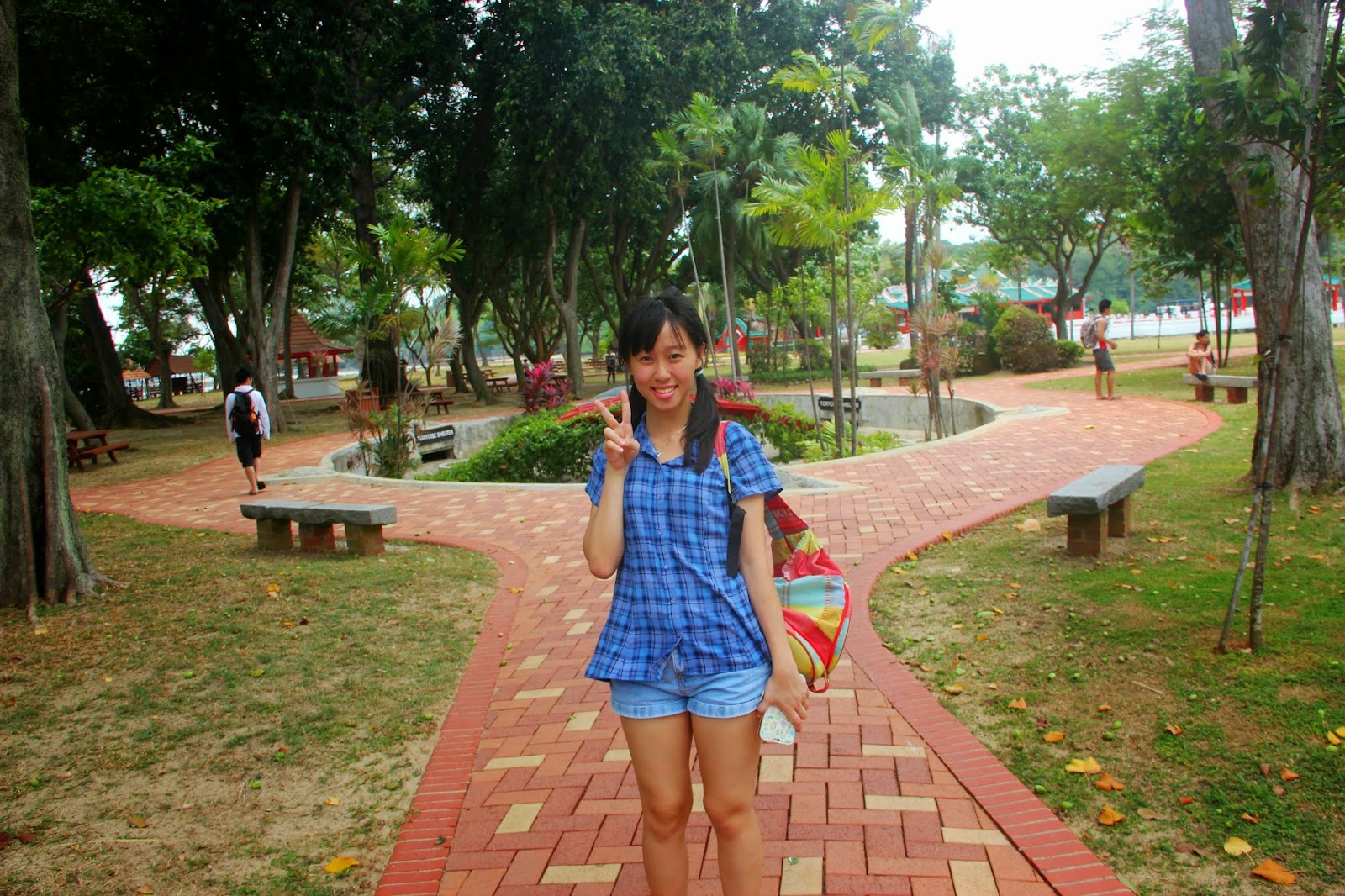 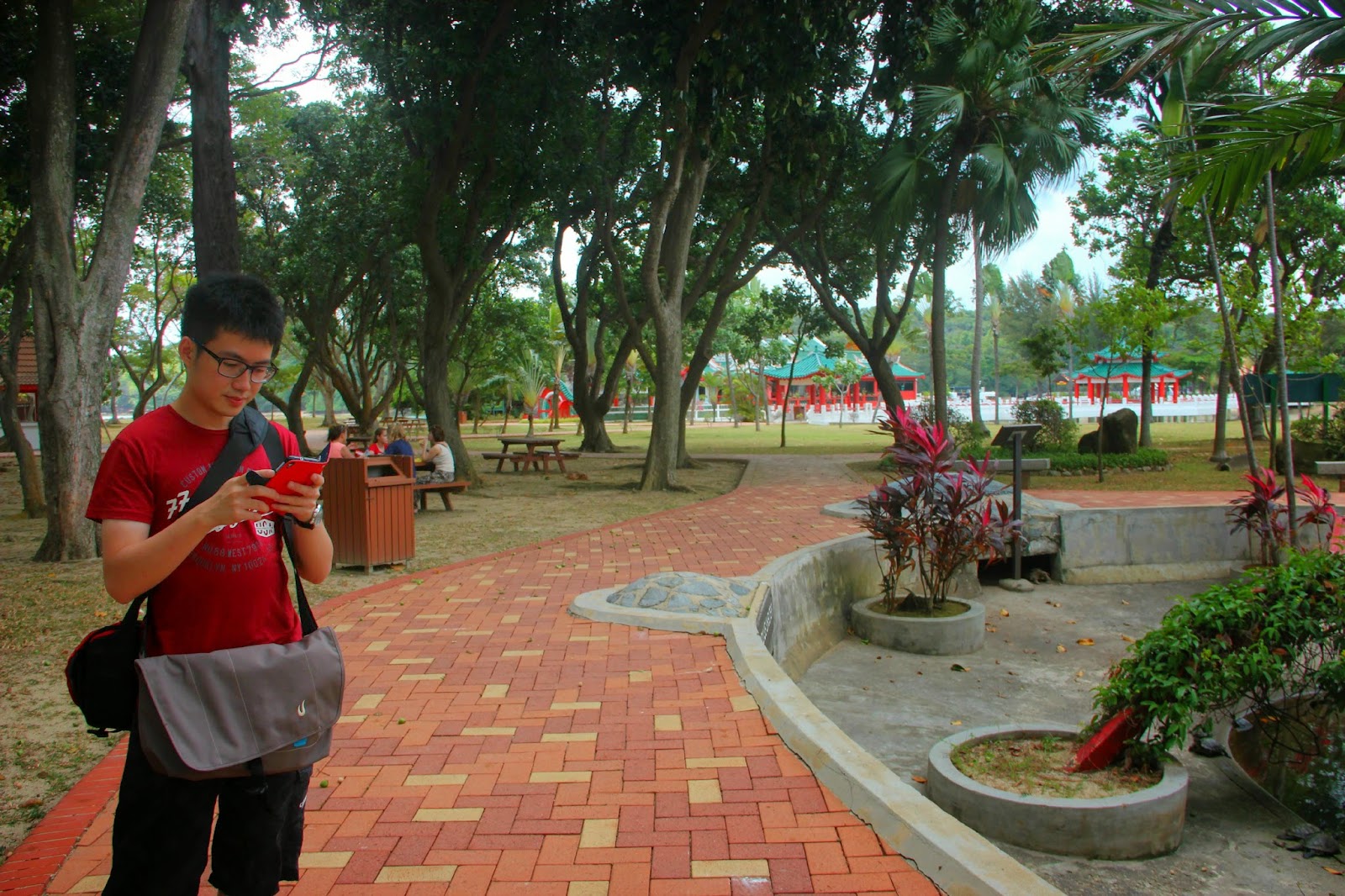 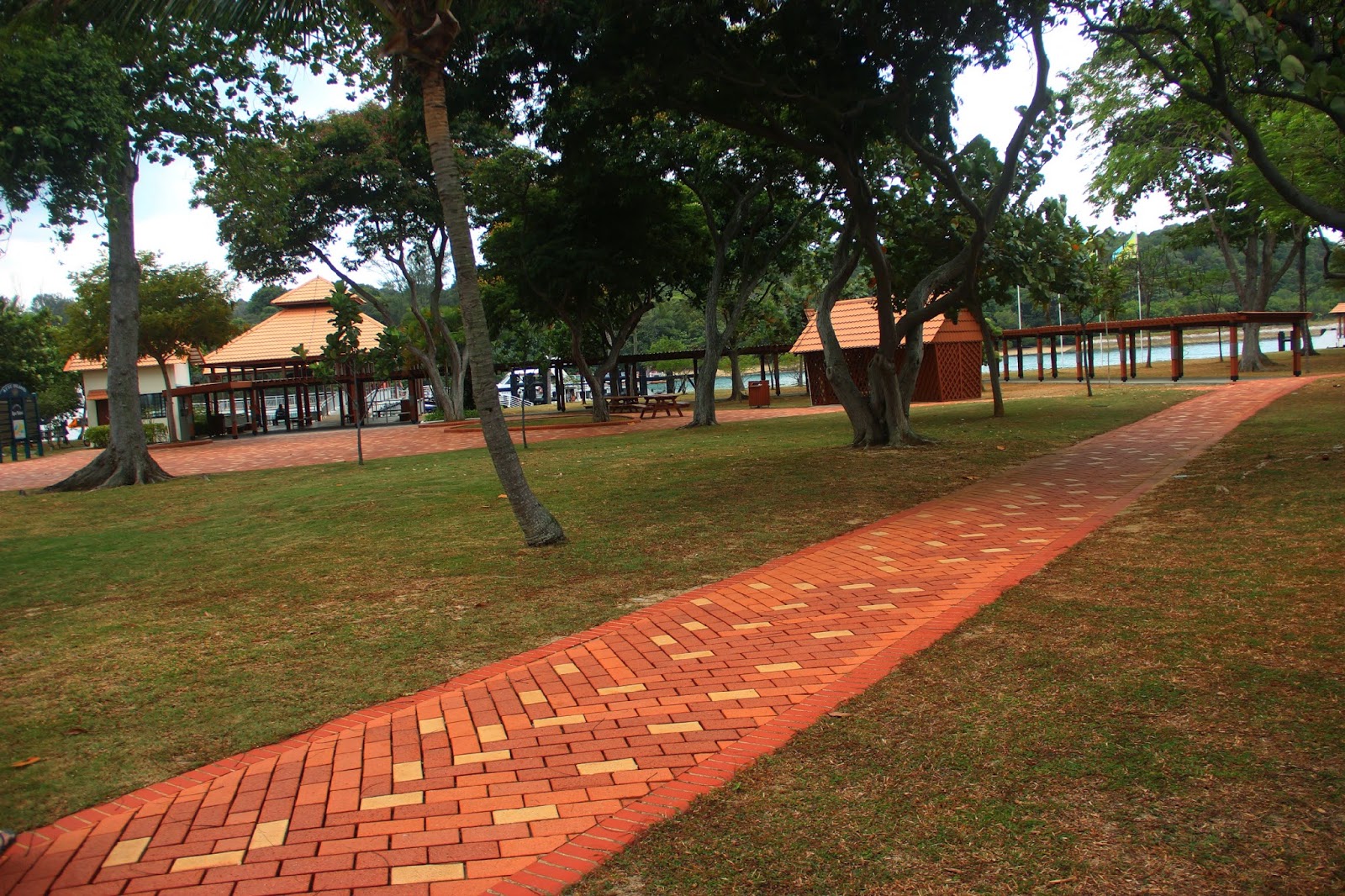 One could also swim there too, if you're feeling up to it, as there were two blocked out lagoons on both sides if the island. I managed to catch an outdoor shower facility as well, and there were a few other visitors who were busy dipping themselves in the water. 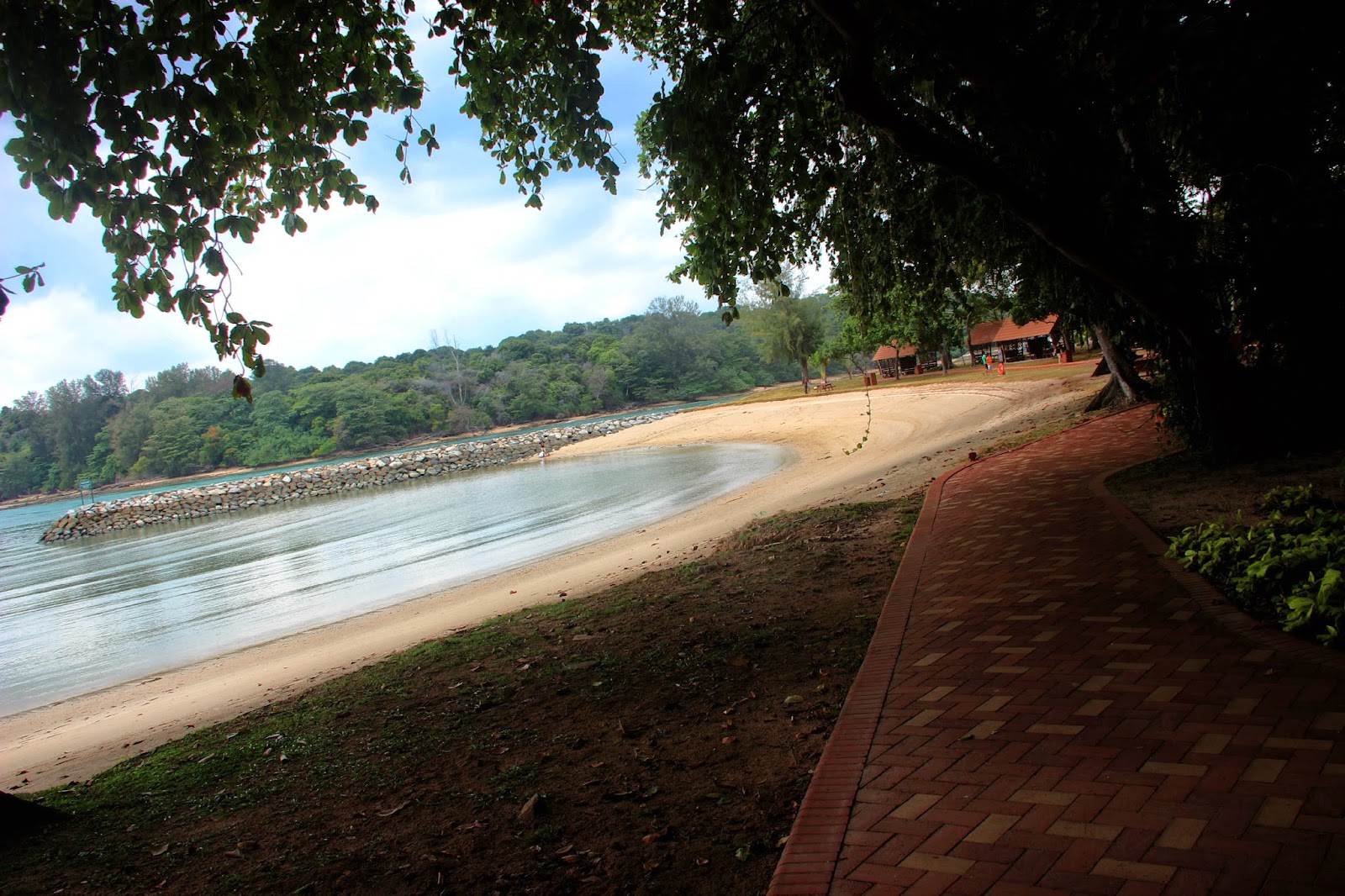 Of course, the main attraction of the island itself would be the shrines and temple that is located on the island, the main one being the Da Bo Gong Temple that sits right in the middle of a half-dried up lake. It's the red and white temple that you would come across the most often when you Google for Kusu Island. 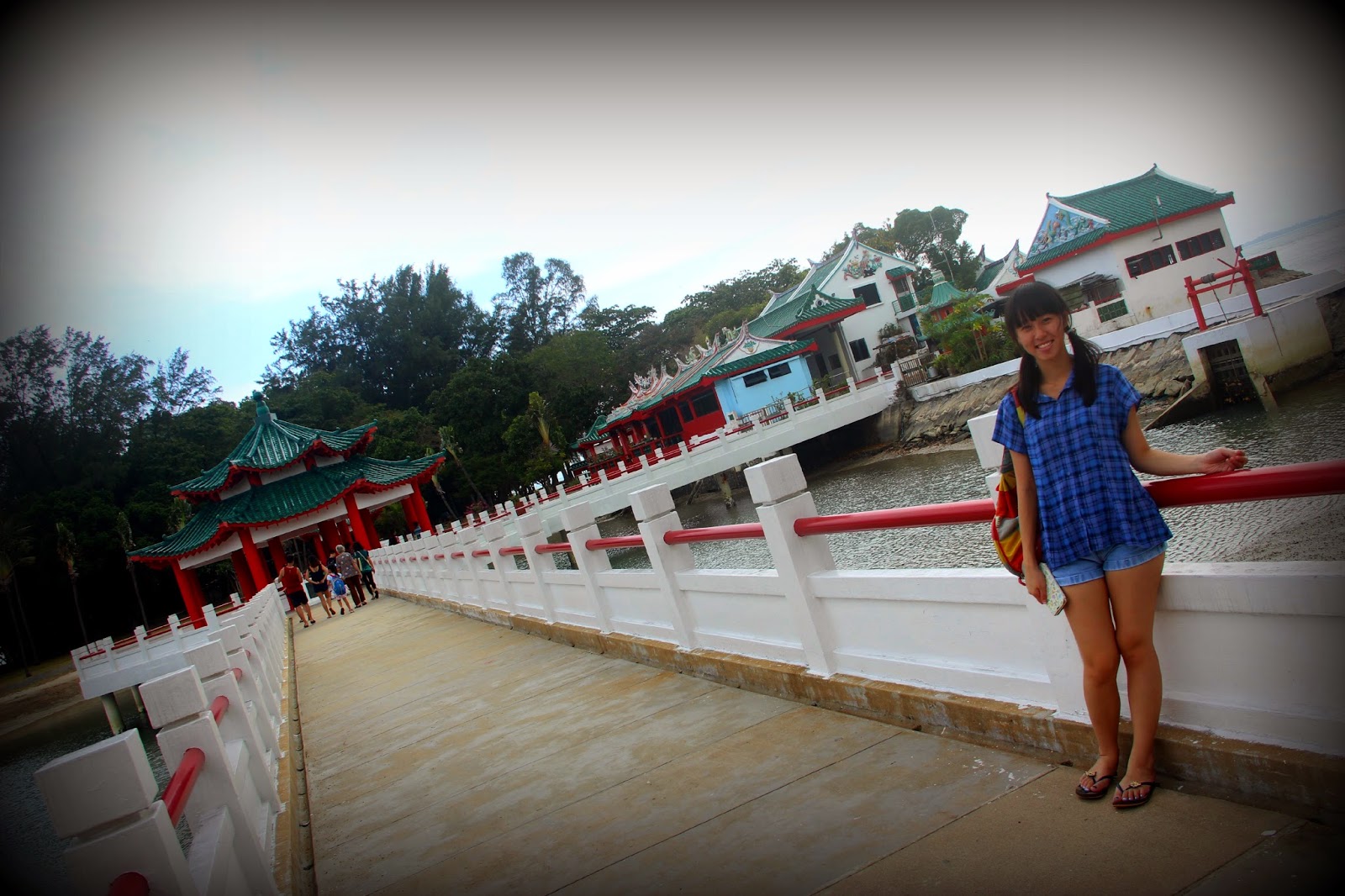 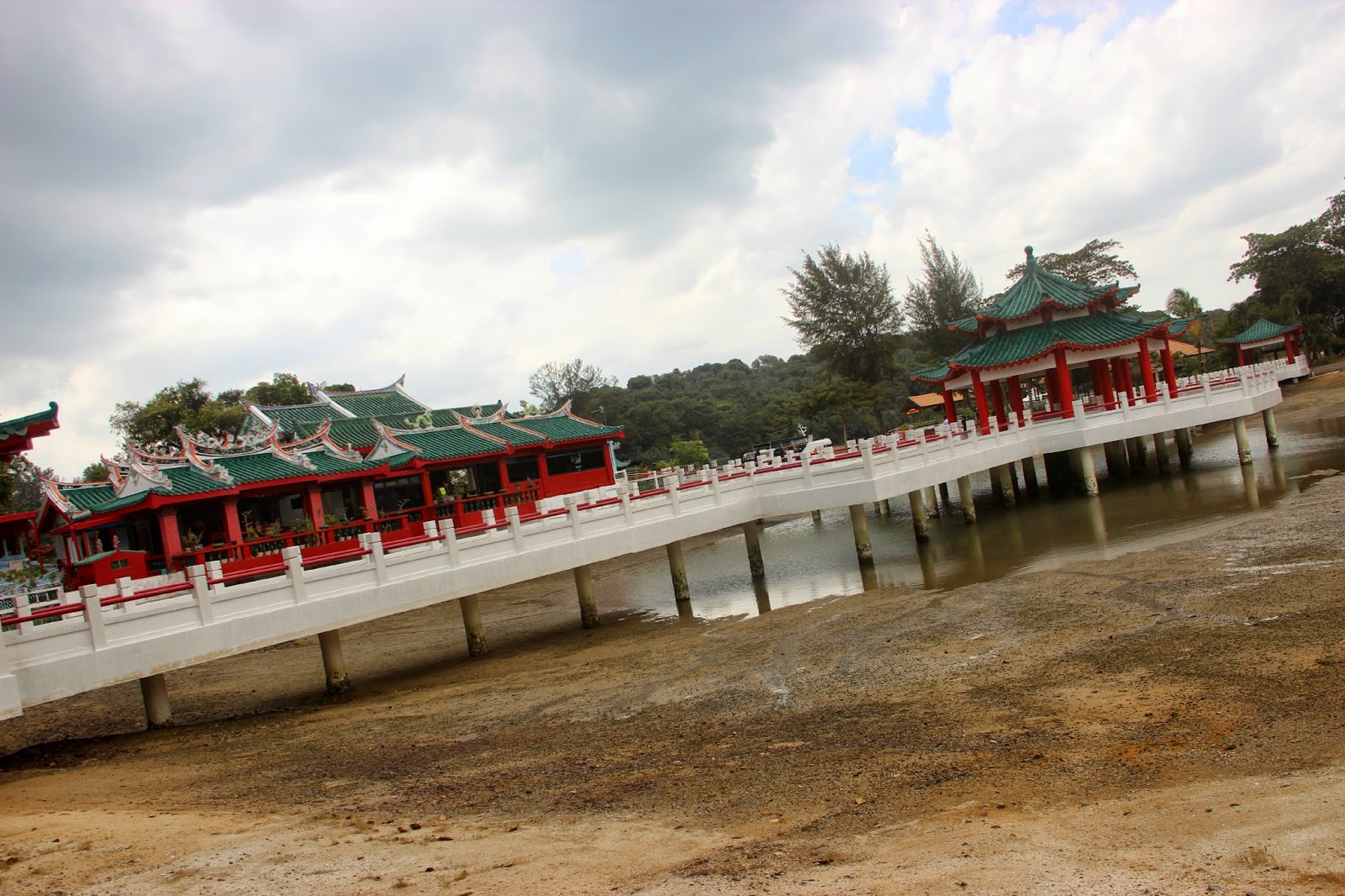 The temple itself is relatively small though, if you want to compare with other touristy temple attractions that are around. There is only an average sized shrine inside and a wishing well in the middle of the lake, with different carvings of snake and tortoises around. 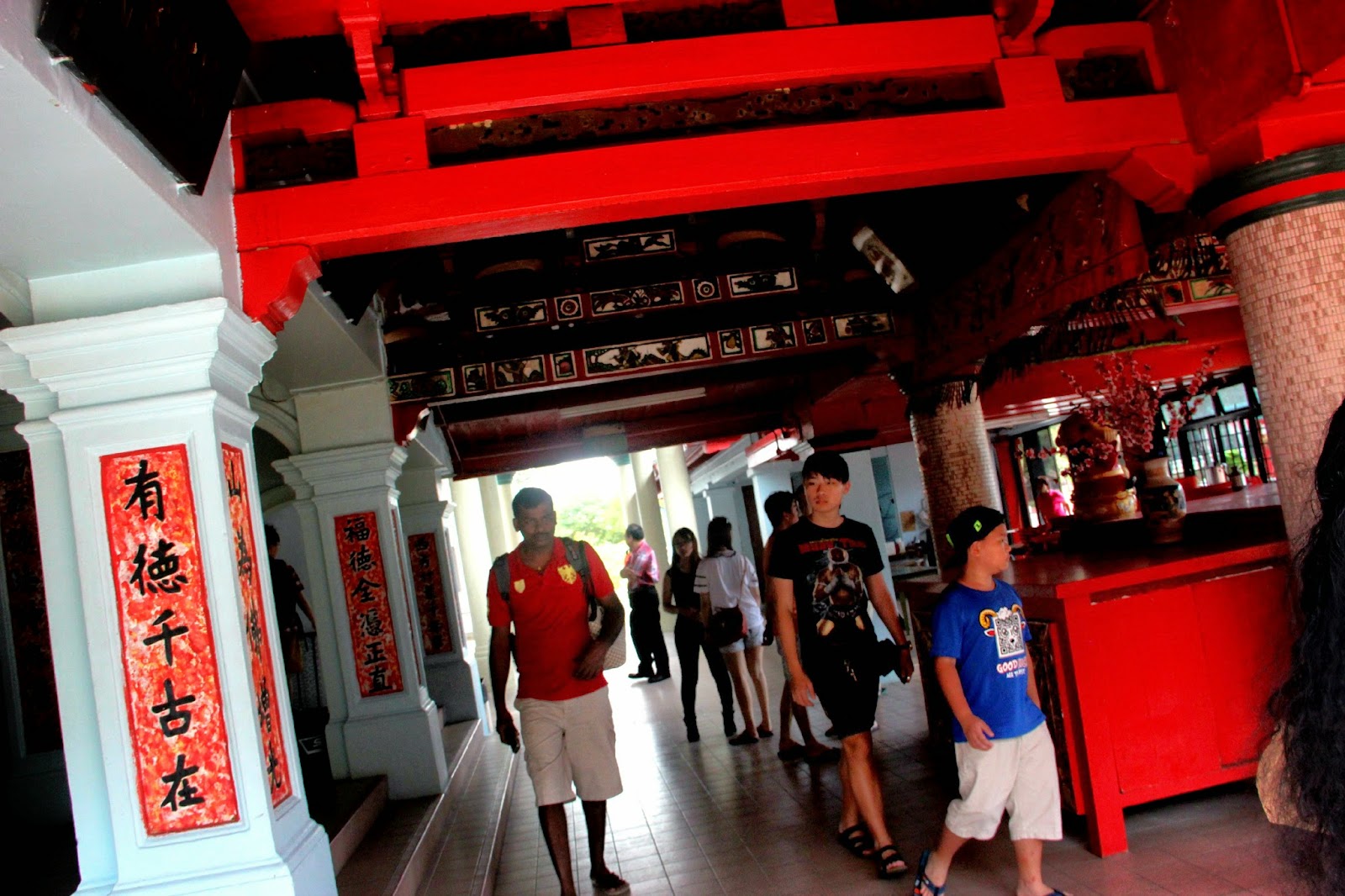 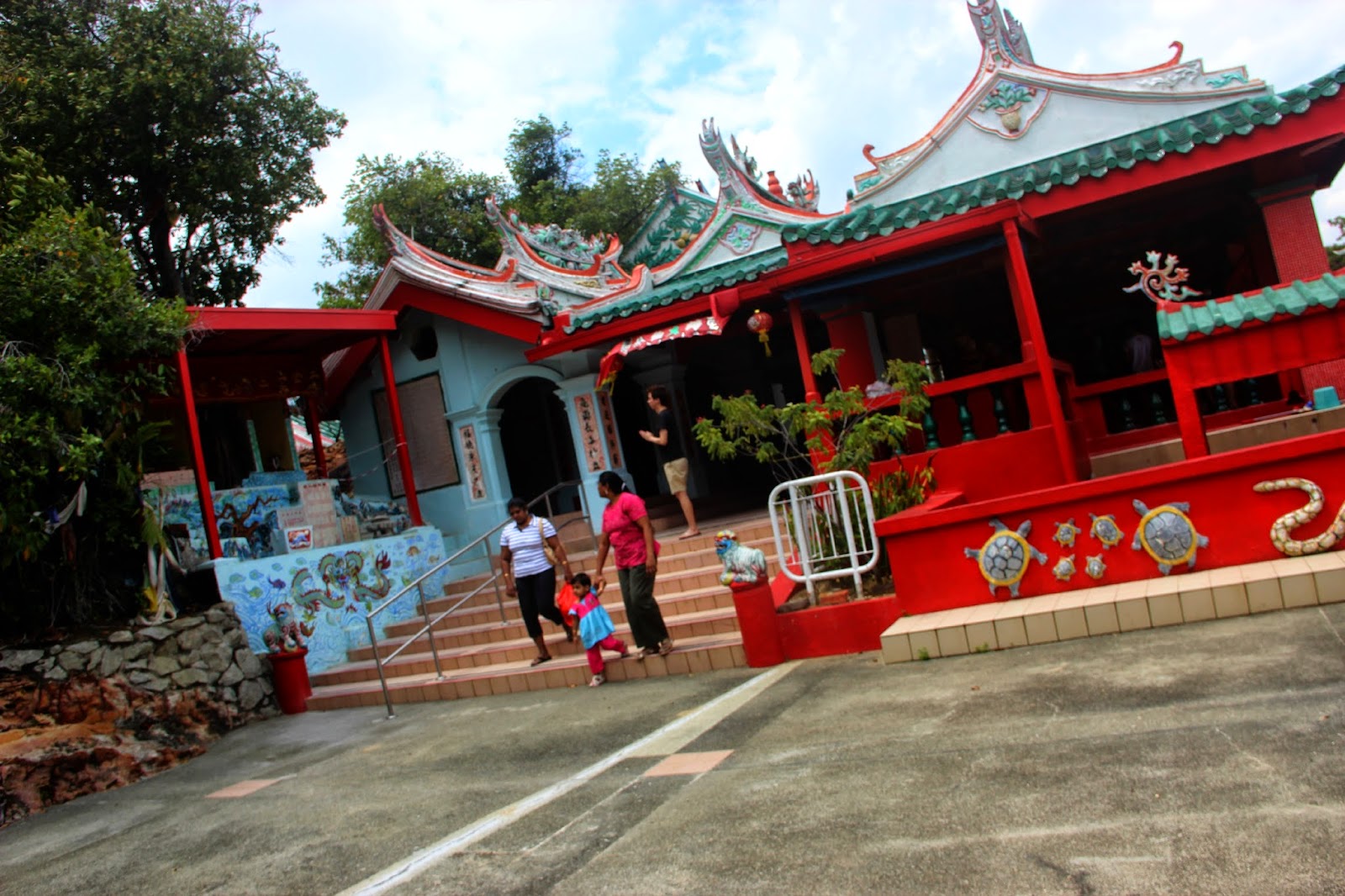 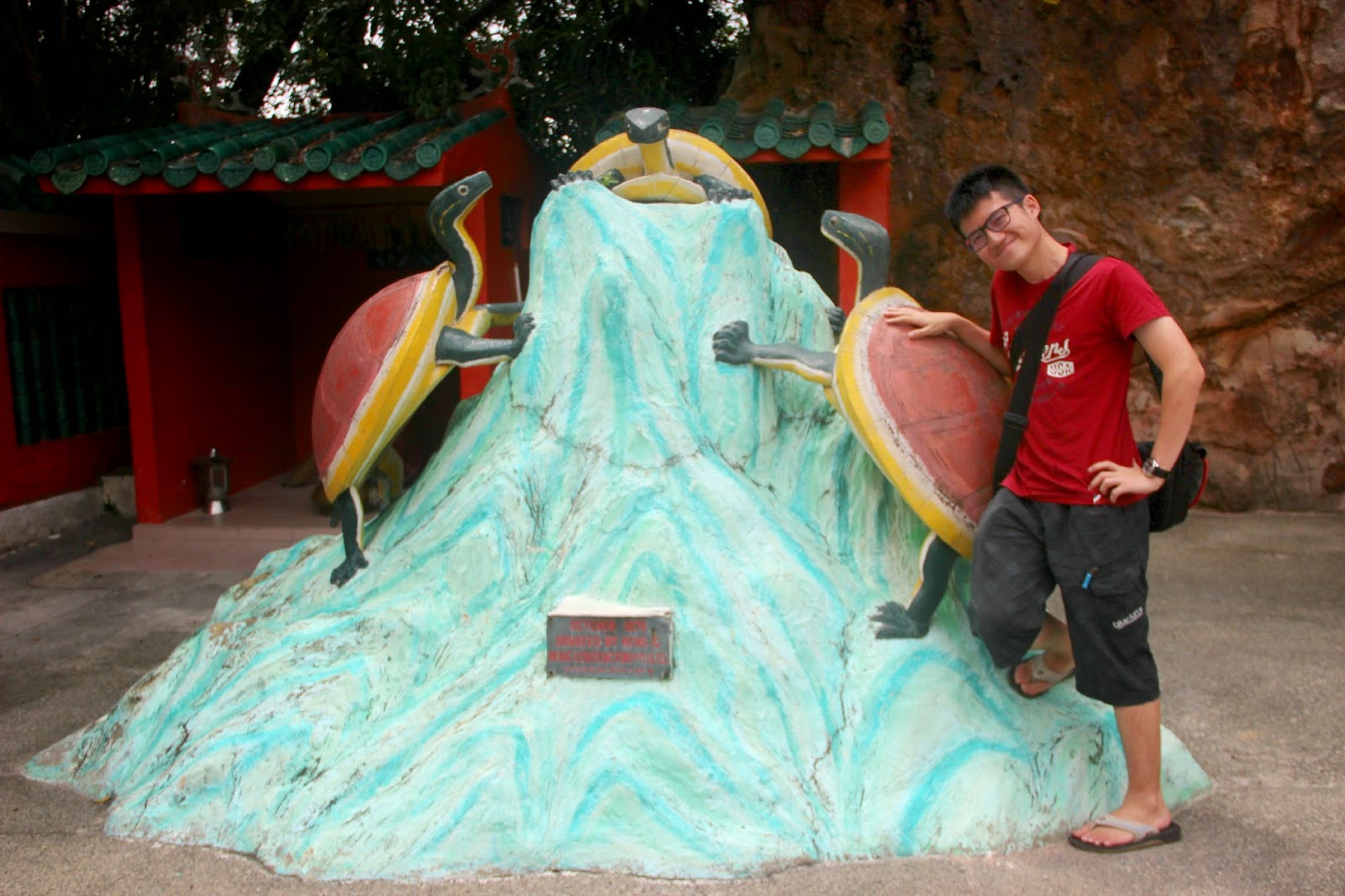 Other than that, there is also a mysterious shrine located on the top of a small hill near the end of the island, in which you need to climb a few flight of stairs to reach. Painted in bright yellow and surrounded by greenery, it looked like a place straight out of a martial arts movie. It's called the Kramat shrine, according to the information board, devoted to three individuals, one of them being Syed Abdul Rahman. You can pray up there too if you want. 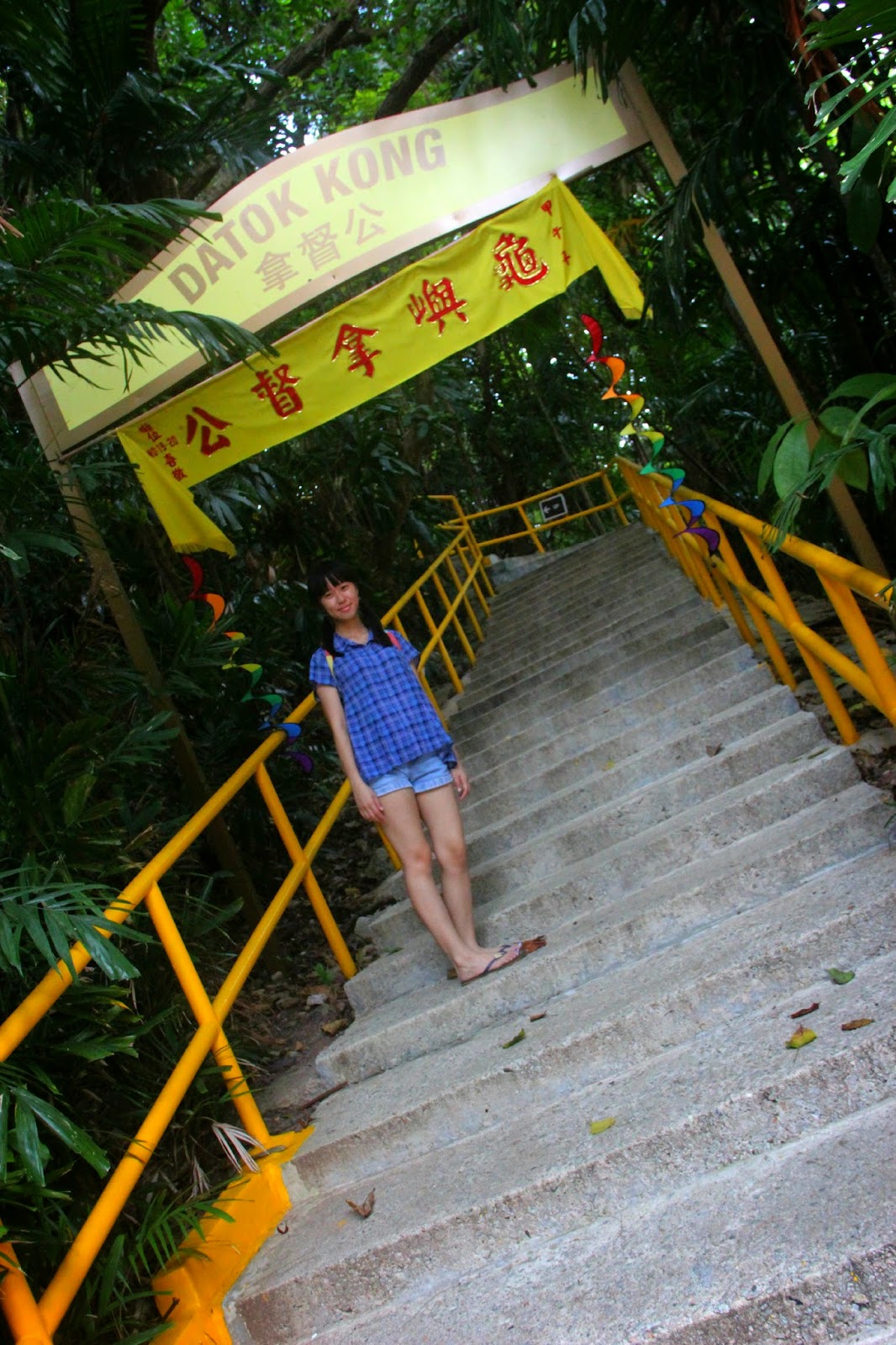 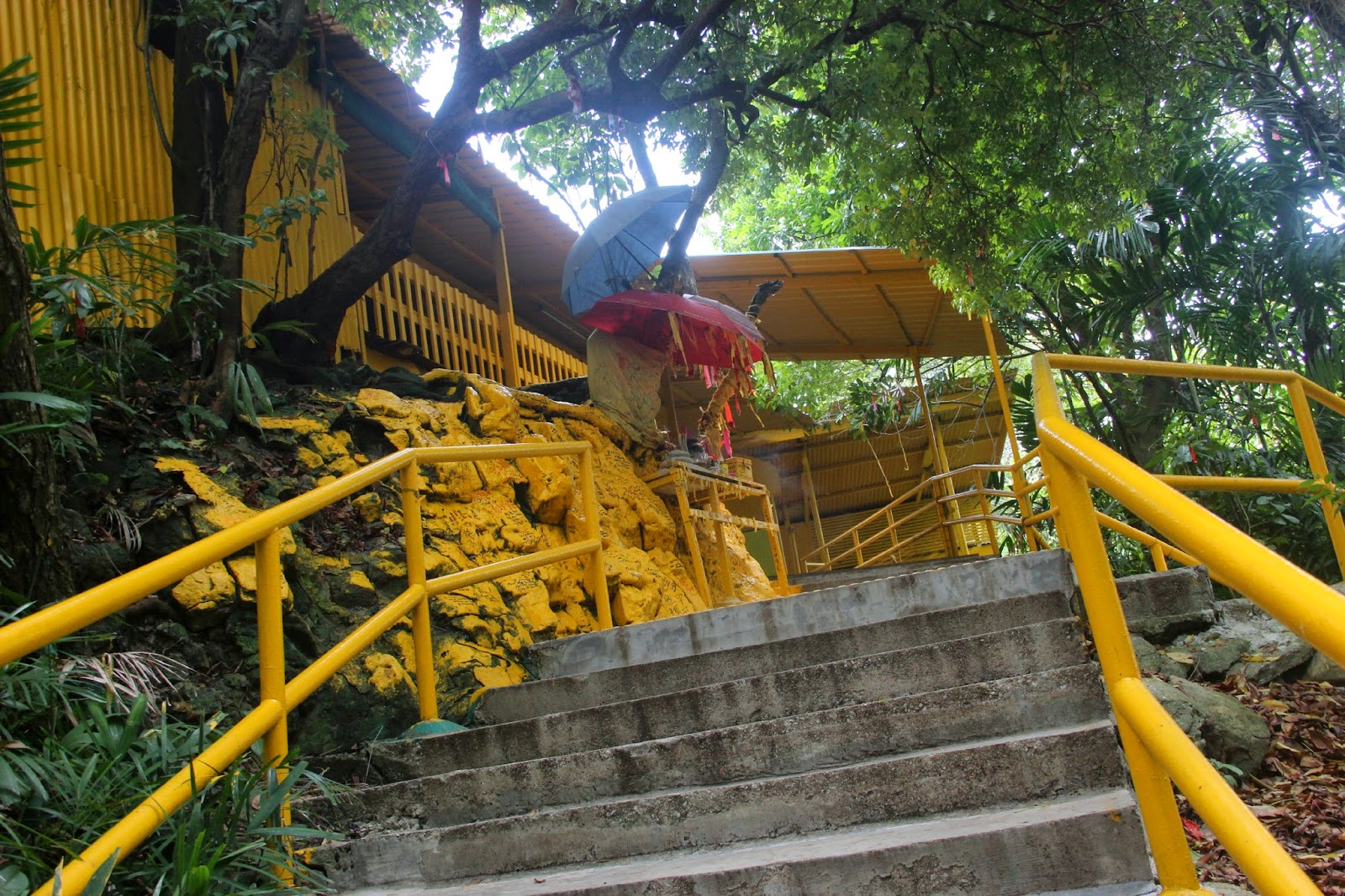 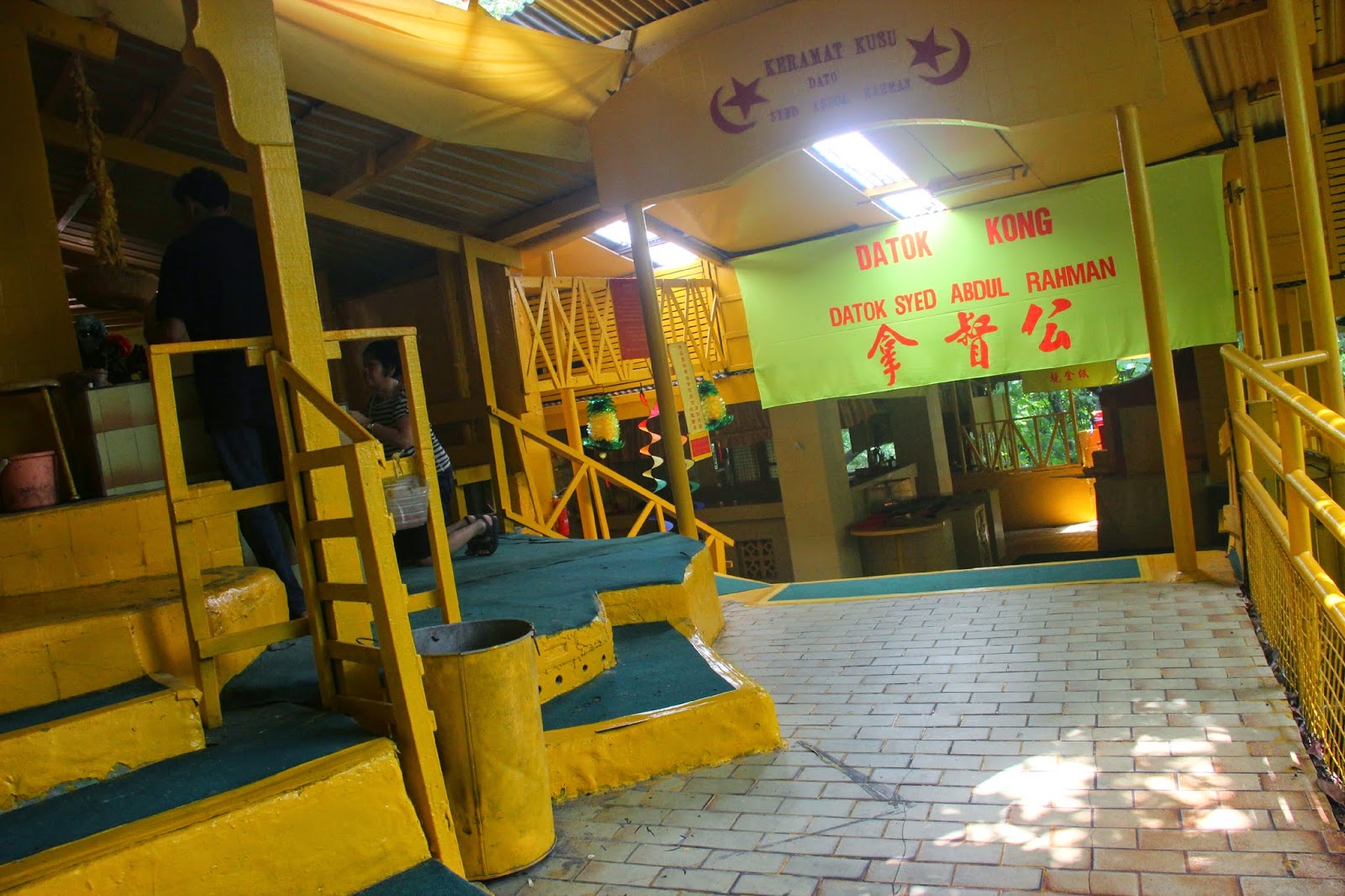 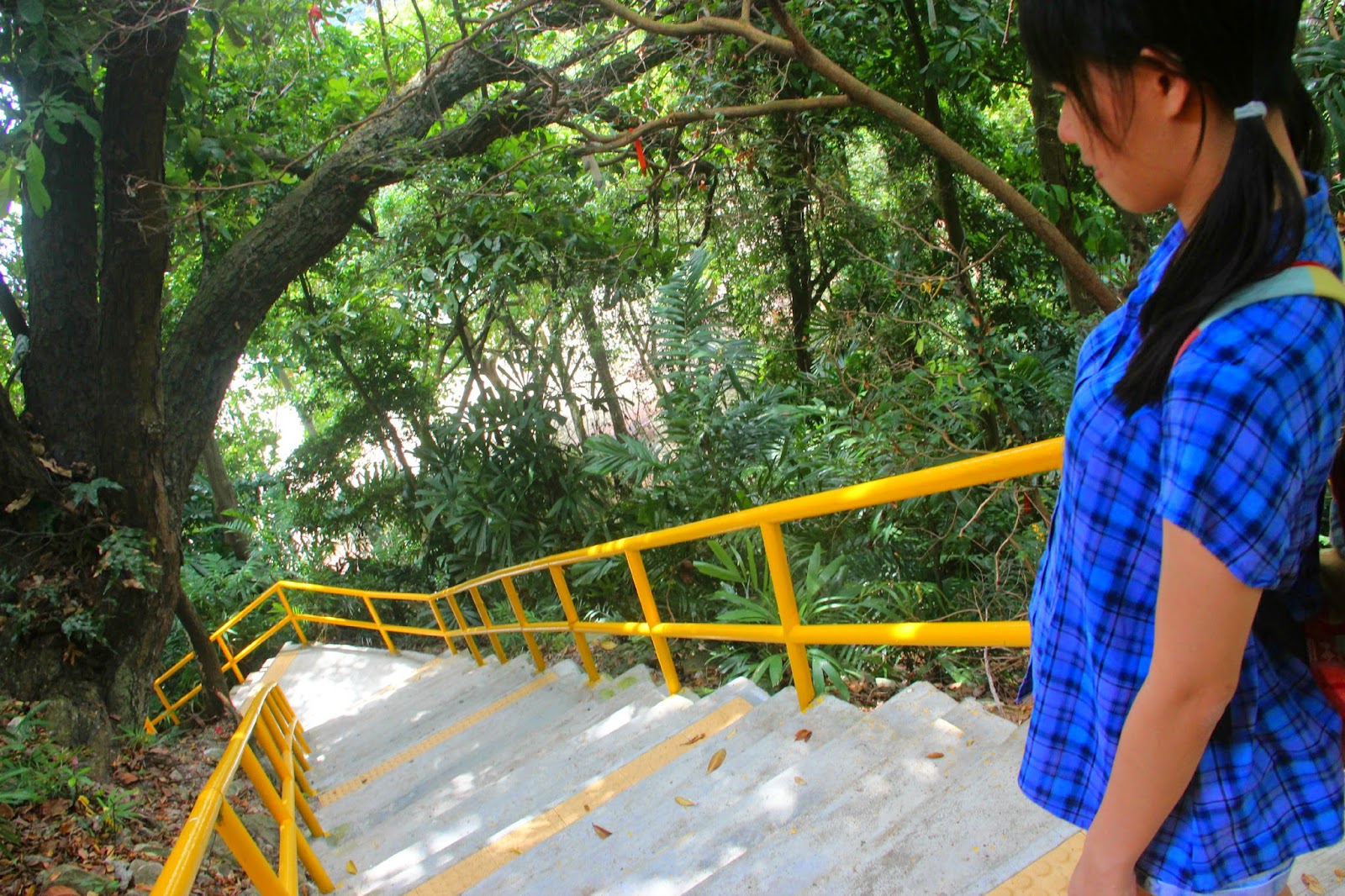 To conclude, I think Kusu Island is quite a fun place to be if you're looking for a place with a mix of sea, park, culture and away from the city, without having to leave Singapore. It's not really big with a lot to offer, but the sights and atmosphere alone is quite relaxing for you to just sit and soak in your surroundings. It's a far throw away from civilization, and you can tell your friends that you have literally been overseas for a trip.

There's no food stalls on the island though, so be sure to pack some of your own food to the place. Still, it's quite a cool place to have a short getaway to, if you're the type of person who enjoys nature and the sea. Best of all, the crowd is minimal at most, and you don't have to spend a lot just to visit the island. Highly recommended.

My next trip? St John's island! Or Ubin.