The Batam Deal: A Review

Batam is an interesting place. I don't know when did it happen but together with its sister island Bintan, this two Indonesian islands is becoming more and more of an affordable and easier holiday alternative for Singaporeans. Just open any deal websites like Groupon and Deal.com.sg and you can find deals to either Batam or Bintan plastered over most of the site.

With offers averaging below 100 dollars (some even below 50), it is hard not to be tempted by such deals for those looking for a short getaway and for those with a tight budget. You don't have to spend long time getting stuck on a plane and you don't have to fork out a crazy amount of cash just for holiday. But are these deals worth it though? 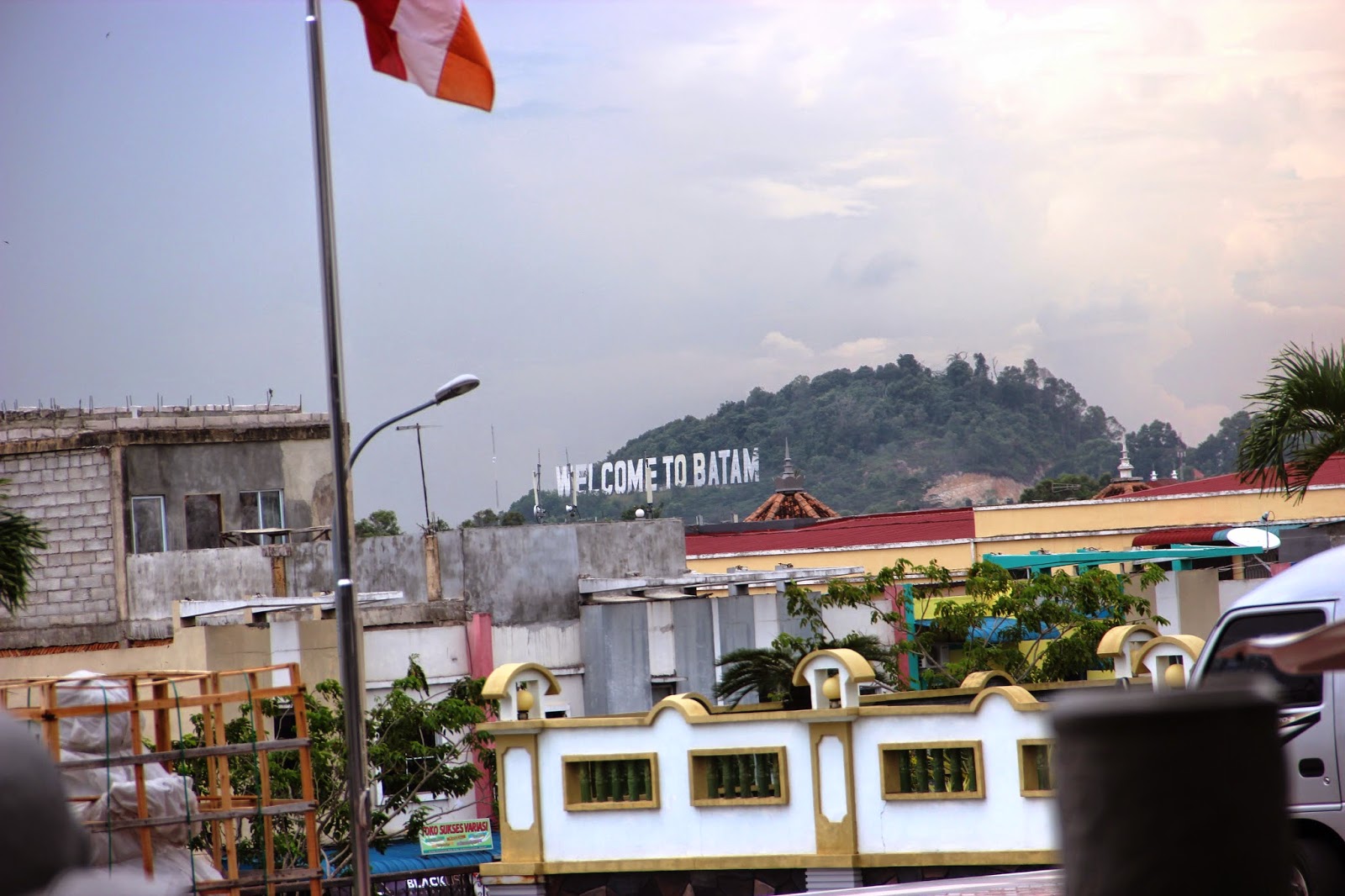 I've been to Bintan once, and Batam twice, with my most recent trip ended just today. I got a deal off Deal.com.sg for a 3D2N stay at a 4 star hotel in Batam, costing only 90 SGD, as advertised on the site. The deal does not include a 20 SGD fuel surcharge for the ferry, so at the end of the day I spent around 110 SGD for the entire trip. Quite a worthwhile offer, considering that it includes a return ticket for ferry transport to Batam, as well as a 3D2N stay at Novotel, Batam, inclusive of two days breakfast buffet.

On top of that, the seller also threw in a one day tour around the island, complete with your very own tour guide. They promised air rifle, go kart and massage experience, something that you don't always get for Batam deals. Wanting a hassle free short trip, I bought the vouchers right away, along with le gf and two of my other friends, Victor and Andrea. And voila, before we know it we were already chugging our way to Batam. 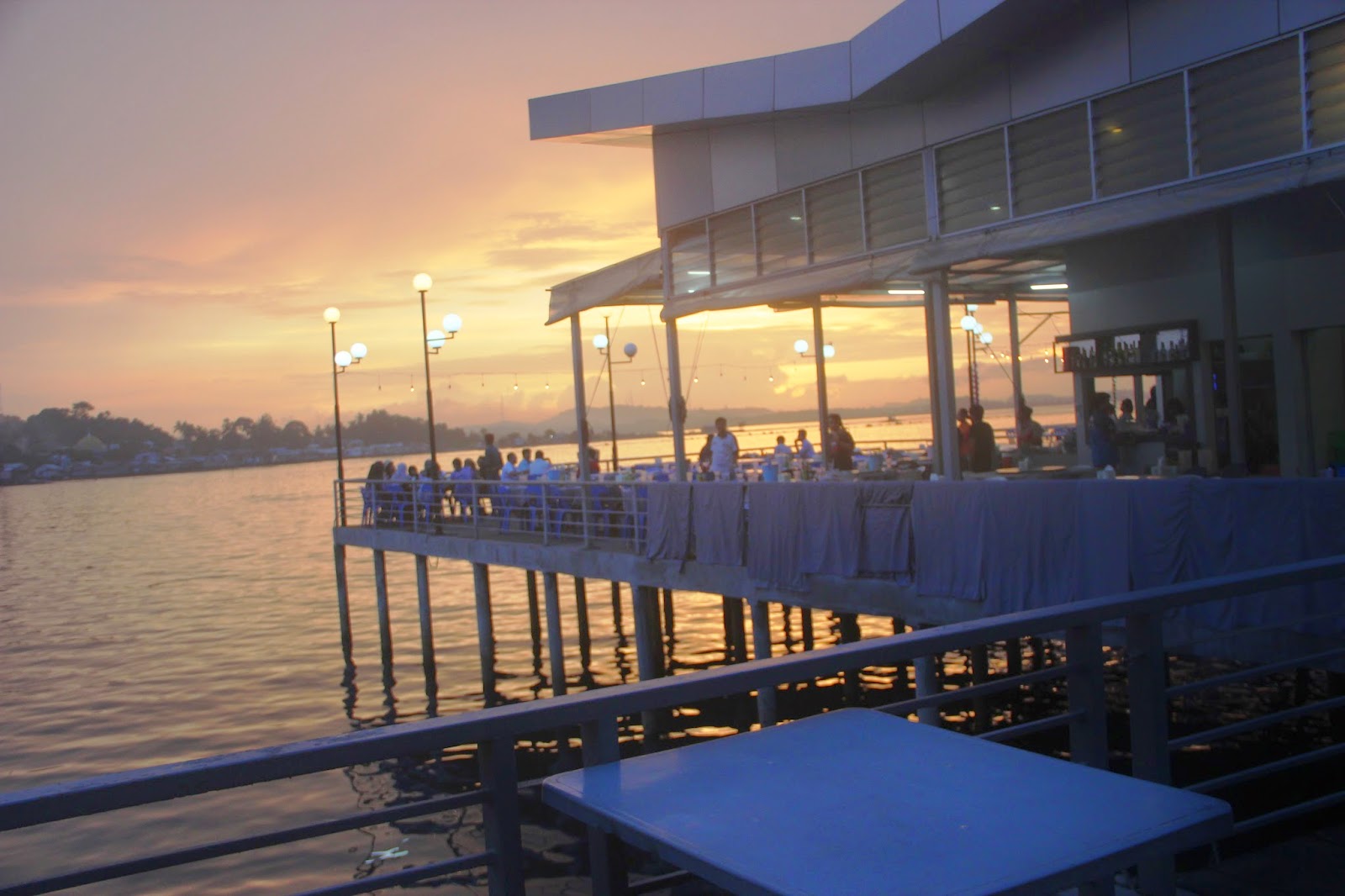 The entire booking process was surprisingly easy and quick. So much so that I was worried that I may have just bought into a scam. After checking out almost 400 SGD worth of e-vouchers, all I had to do was to send an email to the seller's email with my preferred travel date and information on all the travelers, and sit back and wait for the confirmation email. The hotel booking, the transport arrangement and all the other administrative process were settled without a fuss by the seller. All we had to do was to show up early on the travel date, collect our ferry tickets and be on our way.

I must say that I was pleasantly surprised by the efficiency of everything. Other than the extremely early timing of the ferry on the departure date (8.45 am), practically everything went on smoothly. Each of us were asked to paste a sticker on ourselves so that our tour guide can recognize us once we reach Batam. There were others on the ferry as well with the sticker on their shirt, which was kind of a relief because I liked the idea of us not being the only one for the trip.

Once we reached the Sekupang ferry terminal in Batam, sure enough there were a bunch of people dressed in similar blue and white uniform waiting outside the arrival gate with numerous placards with different names on it. We had to find our name of course, after which we were bundled up together into a van, together with other groups (there was a family with children and a group of older people) that we were going to spend the day with. There was also a tour guide of course, who will be following us for the rest of the day. The tour was organized by a company called Best Batam, which was quite big judging from the fleet that they employed during the day. 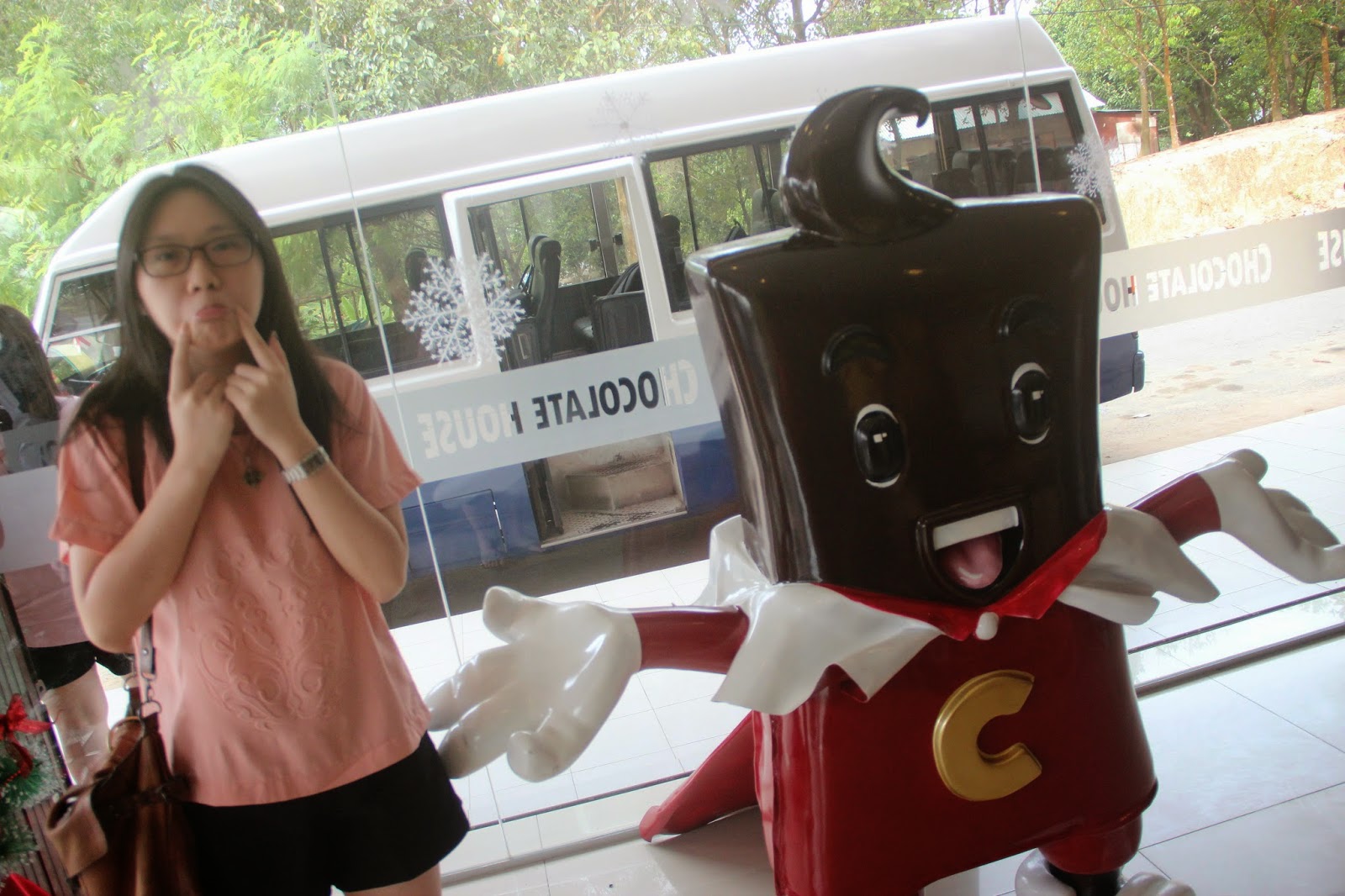 While the tour itself sounded great on paper, with go kart sessions and all, the reality was far from authentic. We were brought to different store locations around Batam, namely a chocolate store, a kuih lapis shop, a factory outlet and a batik shop. The stores themselves were made to sound like places where you can get authentic Batam products, but the reality was far from it.

Most of the items were overpriced, with some of them even more expensive than Singapore. A literal tourist trap, if you ask me. We guessed that the tour company had some sort of arrangement with the shops, where they will receive a certain commission from the goods sold in the shop. We did not buy much from most of the shops, with the exception from the one that sold local delicacies such as fried fishballs and sotong, which we later discovered that the exact same thing was sold in malls at a cheaper price.

The other locations that we were brought to was a temple and the go kart arena. The first was okay, the second was kind of a disappointment. The temple looked normal at best with its modern architecture, save for the cute 12 laughing Buddhas with different zodiacs sign at the entrance. They make for a killer photo, if that's what you're looking for. 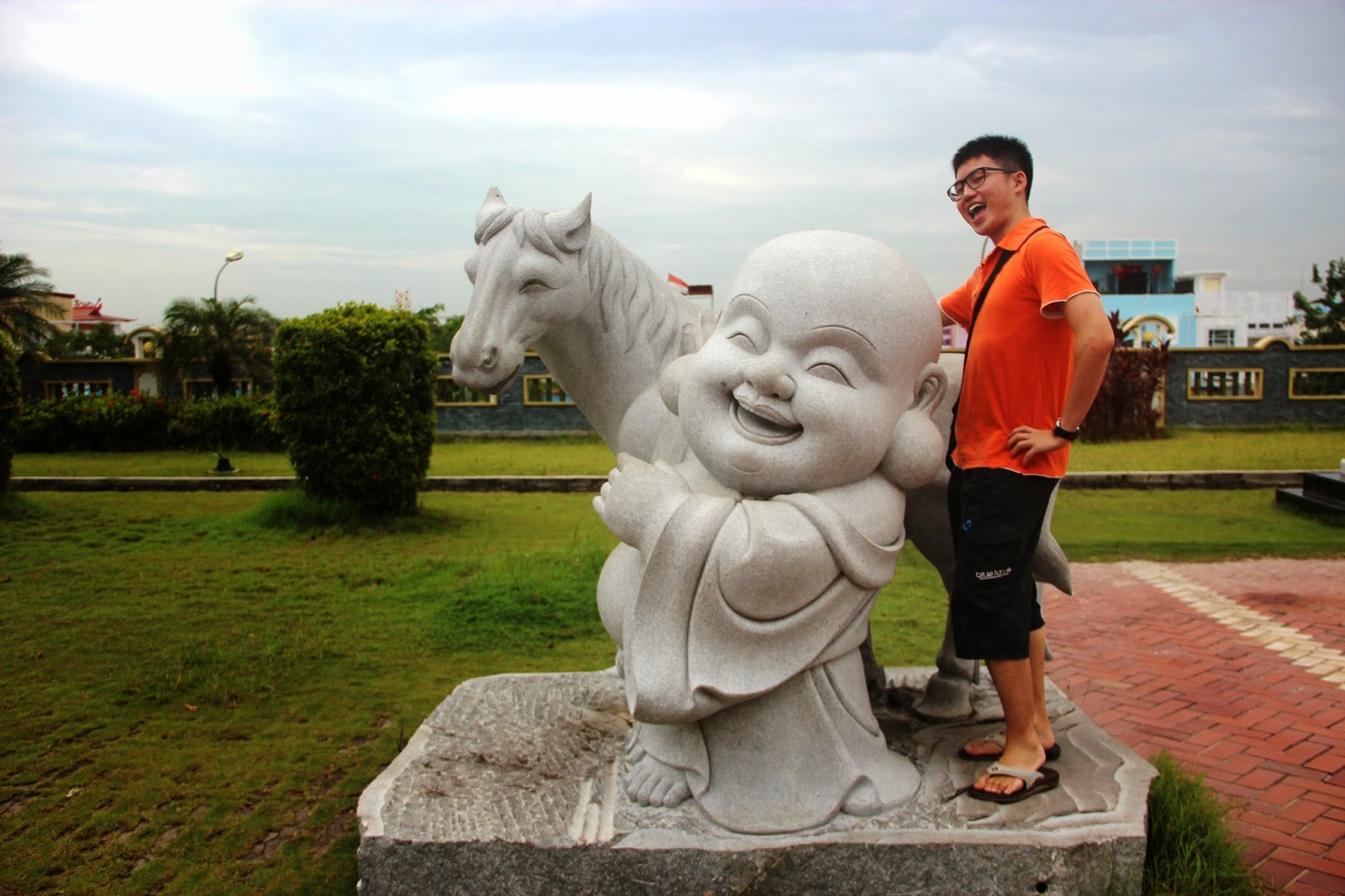 The go kart track on the other hand, was a bit of a let down. The track was located next to a construction site in a run down area, with nothing much to see except rubble. But I guess we cannot expect much from a cheap deal. And I got to ride go kart for the first time in my life, ant I guess I got that going for me, which was nice. Just don't expect too much from the surroundings. 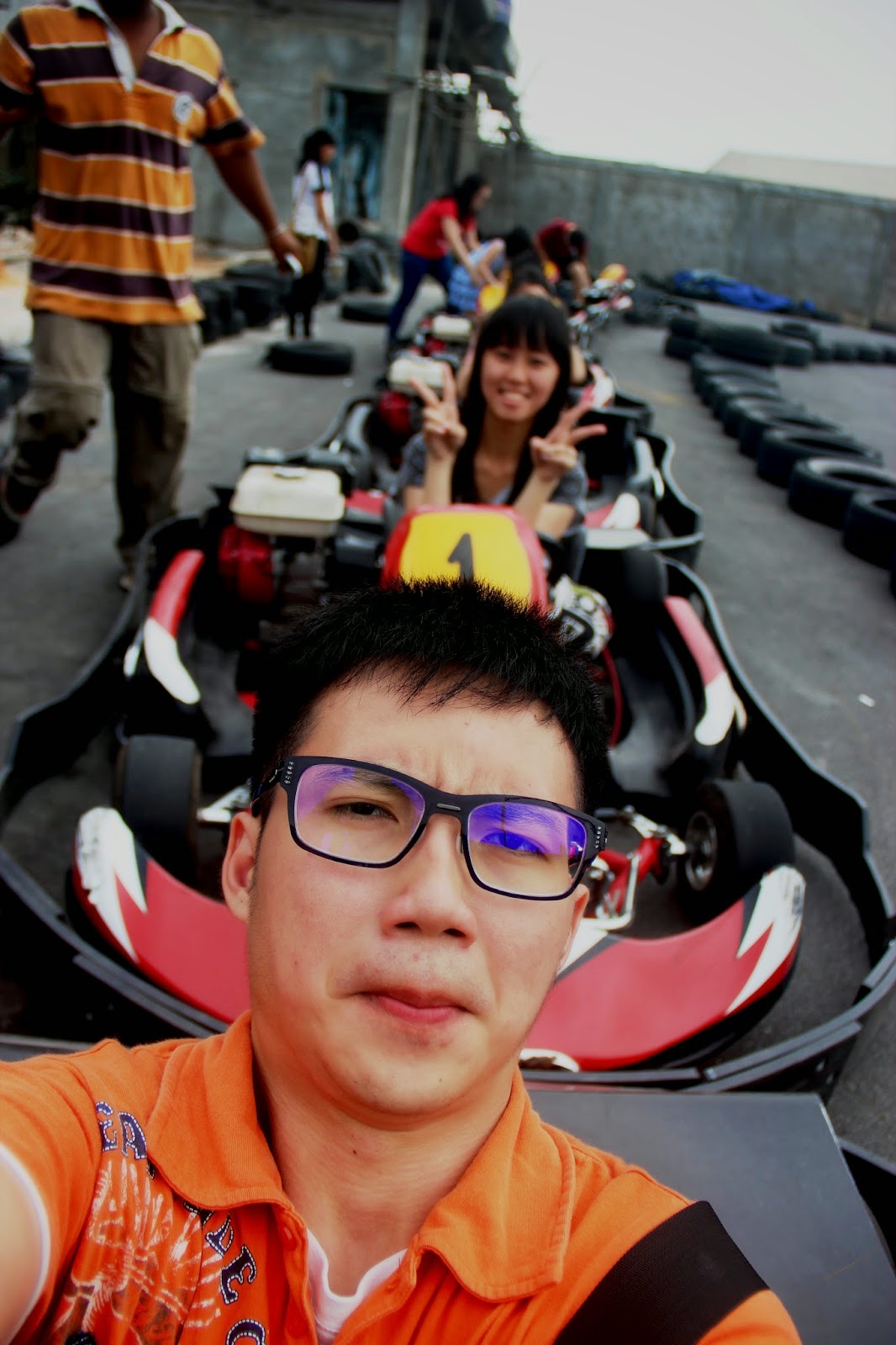 After the entire experience we were brought to a buffet lunch and the massage session that were both included in the deal. The lunch was so-so (again one could not expect much from a cheap deal thingy) and we had the fork out an additional 30 SGD for the massage session as we wanted a two hour session instead of the given one hour session. A bad choice, in hindsight, since it was terribly awkward situation. I mistaken a disposable underwear for a showercap, and I had to endure freezing temperature in a half naked stage. Totally awkward.

Still it was not too bad, it was the first time that I got to try a body scrub treatment, as well as a bath in the massage parlour. And did I mention that they have a heart shape Jacuzzi in the place? 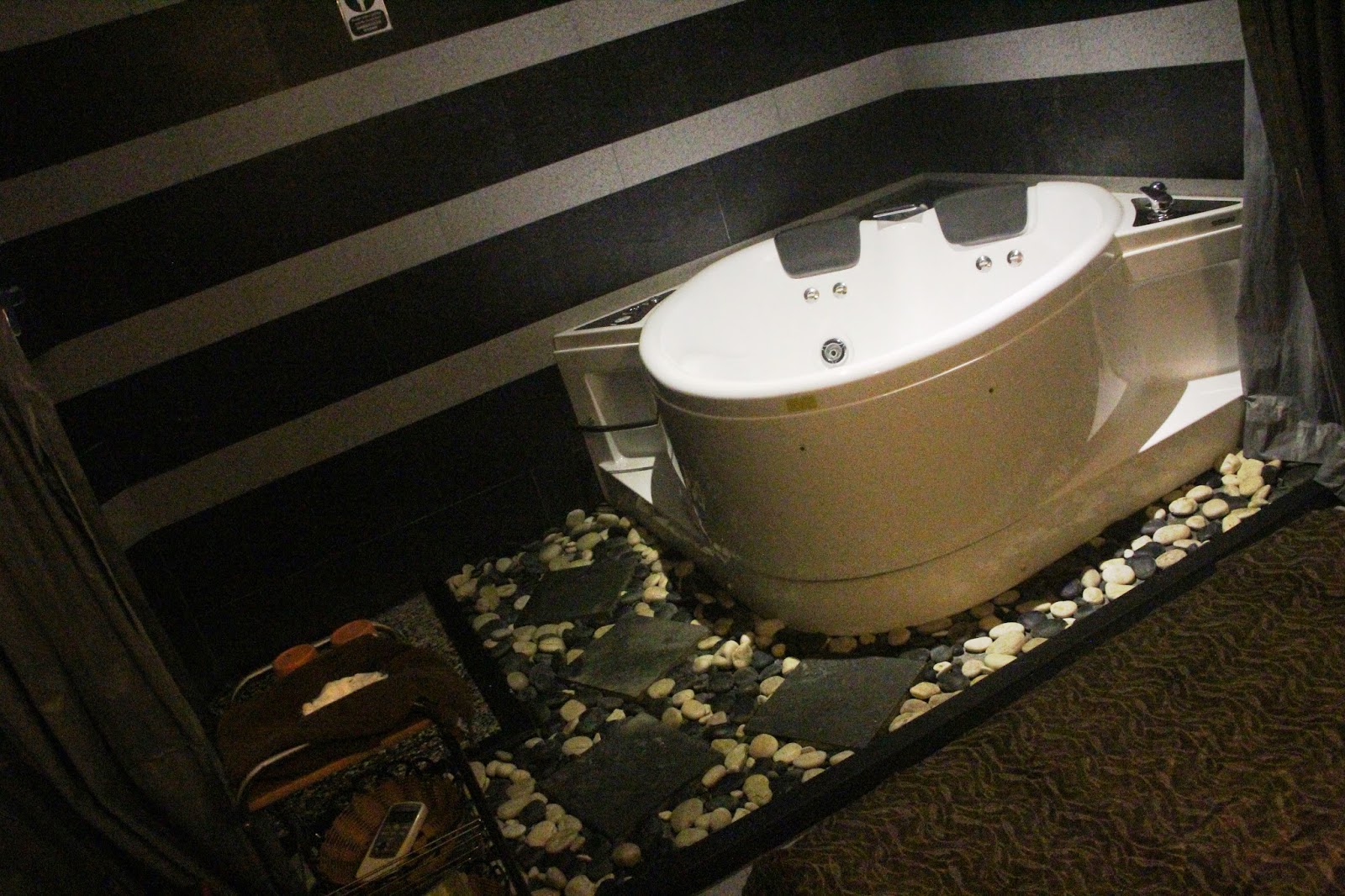 Totally not awkward when you're with another guy.

Other than the tour, there was not much that we could do in Batam though. The people we asked suggested roughly the same things, which were shopping at the mall, going for massages or singing karaoke. There's a few malls on Batam that you can visit, with the more famous ones being Nagoya, Batam City Square and DC Mall. Since none of us liked singing, we managed to drop by two malls during our short time there.

One thing good about shopping in Batam is the incredibly cheap prices of the item that you can get there. We were talking about going to Batam just to do grocery shopping, you can get like half price for most of the food, and I just bought a travel bag that is normally worth 100+ dollars for only 24 SGD. A total steal.

As per recommendation by our tour guide, we also went to eat seafood at a not so good smelling seaside. For 20 SGD we got a two way transfer to/fro our hotel and a six course dinner, and not to mention a killer sunset view. Also an opportunity to take great photos. 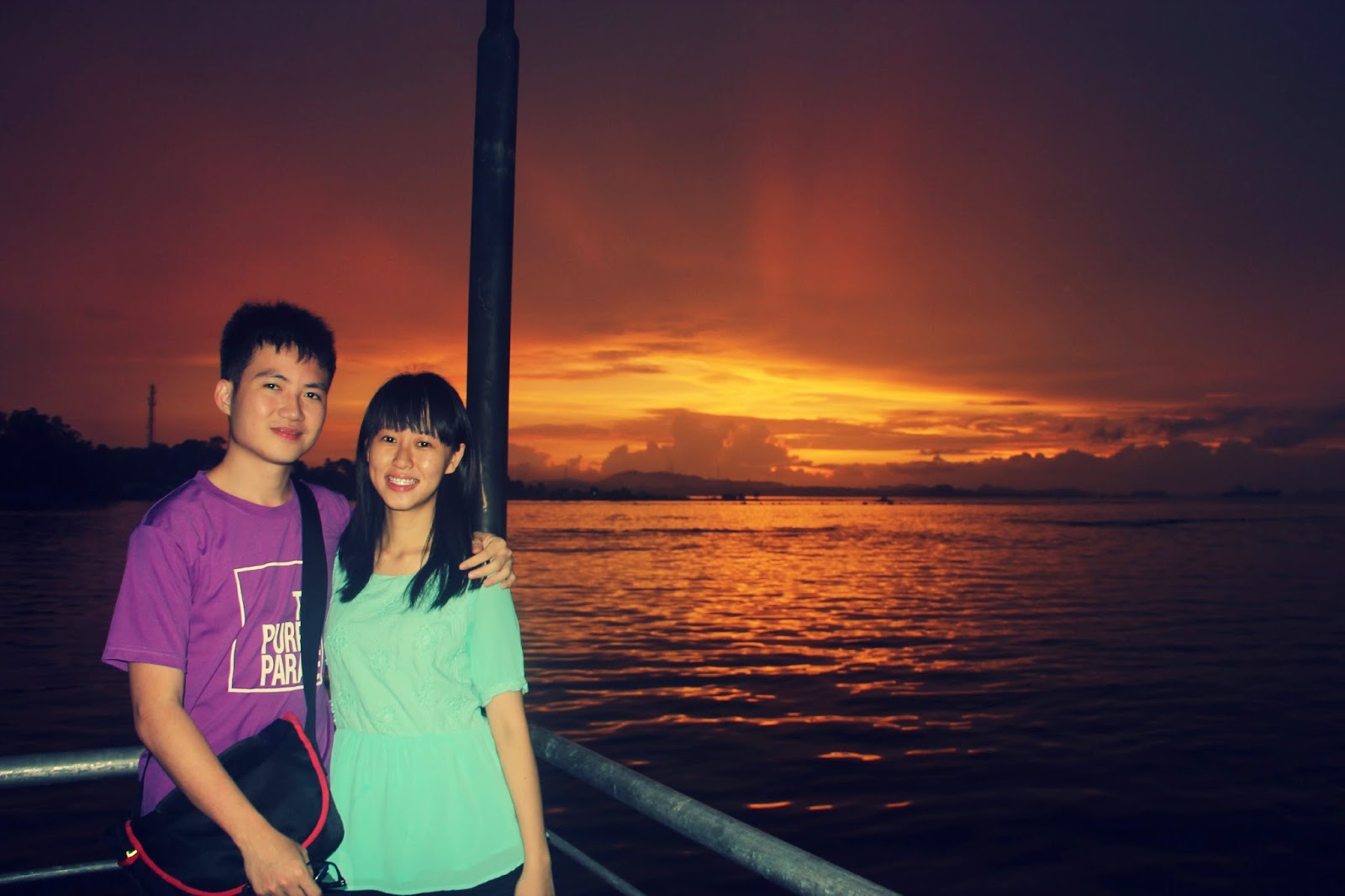 The food was just edible though.

Aside from the shopping and the occasional venturing out, our time was spent mostly cooped up in the hotel, just chilling and watching TV. Getting around was not easy, as you can only rely on cabs, which was why we preferred to spend most time in the hotel. The rates of the taxi from the hotel was fixed, though getting a cab from outside was slightly more difficult, as you can only get them from places like big shopping malls.

The hotel that we stayed in, Novotel, was quite good though. The room service was cheap, and the service was top notch. With the small exception that there were not much to do in the hotel. The pool was small and there was no sports facility except a gym, but the rooms were spacious and comfortable. Definitely don't mind going there again.

All in all Batam is not too bad a place if you're looking for a short trip of sorts, and if you're looking to shop. Not sure how staying in the city compares to staying at the seaside, so I might want to try that next if I have the chance.