At the End of Everything #14 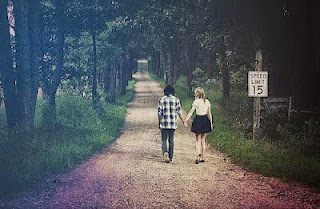 The sun that was shining on us that day reminded me of the day which I went out with Phoebe, almost four months ago. It was fierce, bright and unforgiving. Already my skin glistened with sweat.

It was surprising how fast time passed, and how faster things change with time. Just four months ago, me and Phoebe seemed like an inseparable couple, sending hundreds of messages each day, sharing almost anything with each other. Back then, it seemed as if we were going to be friends with each other for a long time. We even made plans to visit the outlying islands around Singapore together.

But somehow I managed to screw everything up, and we reverted to being strangers. Just like before we knew each other. The mere thought of that still makes me sad of myself. I got too far ahead, and let the fear of something that was not real overwhelm me. And I chickened out. A part of me cannot help but wondered how Phoebe was doing. Will she ever remember me?

A slap from behind startled me from my thoughts. The palm of a girl landed on my left shoulder, like the friendly pat that my buddies used to give. “Hey, what are you standing there for?” came the voice, half sarcastic, half teasing.

I turned to see Jenny, her hands on her backpack strap, a towel around her neck. She has been talking about our trip today for days now, our first attempt to scale the highest natural point in Singapore, Bukit Timah. It was our first date together too, and already we’re doing something so un-ordinary. At first I was afraid that the whole thing might turned out to be one big joke at the end. But here we were, the hill in our sight.

“Uh, nothing. Just looking at how high we need to climb later,” I said, as I turned my attention to the piece of greenery that jutted up from the landscape. Standing 164 meters tall, Bukit Timah is hardly considered one of the taller mountains around the region.

In fact, the name itself, which meant hill in Malay, is already a good indication as any other. One could easily find higher mountains in Malaysia and Indonesia. I thought about the hill that I hiked with my father back at home. Taller than Bukit Timah as well, I thought.

But it was the tallest natural point in the whole of Singapore, with recommended hiking trails, so I guessed it was as good a choice as I could get. Besides, visiting every single popular place in Singapore was something that I have always wanted to do, and the hill happened to be on the list for nature lovers.

Jenny and I walked along the pathway that led us to the foot of the hill, about 15 minutes away from the bus stop. Along the way we encountered some monkeys prowling on top of the roofs of some nearby houses, while others were searching a nearby rubbish bin. The internet had warned us about the presence of our furry cousins, but I never expected to see so many of them in person. Not especially in Singapore. Monkeys prowling about seemed like a far cry from the sprawling metropolis of the city center. It felt as if I have taken a step back into my home country.

“I wonder how the people deal with the presence of monkeys, given how they live in such a close proximity to them,” I wondered out aloud to Jenny. We were the only two person walking near the place at that time, while the rest of the residential area looked strangely quiet. The monkeys did not pay much heed to us though, going about their own business. They were used to human presence already, I guessed. A huge banner that hung nearby warned against giving food to them.

Jenny tugged at the sleeve of my shirt. “I just hope that they don’t come close to me.” Her eyes were fixed at a group of monkeys nearby as we walked. I sensed that she was feeling a little afraid.

I gently tapped on the back of her hand, the one that was on my sleeve, somewhat elated that she was holding on to me. “Don’t worry. You have the money king beside you. I’m sure they won’t dare to come over.” She looked at me and giggled,. My heart to beam in pride.

We made small talk to distract ourselves during the walk, discussing about the latest movies in town. Jenny mentioned about wanting to watch the sequel to the movie ‘How To Train A Dragon’ and we both squealed in delight when I told her that I absolutely loved the first movie as well. We spent the rest of our journey sharing about the dragons that we would liked to own, and she decided that the big one at the end of the first movie was her favorite.

“Can you imagine what I can do with a dragon that big?” Her hands were wide open to illustrate her point, and she was practically jumping on her spot while explaining. “It’s gonna terrorize the whole Singapore!”

I was right in my guess when I read her profile. She was indeed a cheerful girl who was full with energy. And it was infectious too, her enthusiasm. I looked at how her face lit up when talking about the movie, and immediately got an idea. I stopped in my tracks and looked at her. “How about we watch the movie straight after this?”

Without even thinking for long, she immediately shouted “Yes!” on the spot. She even jumped a little. “OMG I can’t believe that I am watching Dragons 2 later!” she loudly exclaimed, all the while raising her hands in a celebratory fashion, bouncing all around. I smiled in response, happy that I made someone’s day today. I liked how she was straightforward as well. I told her that I will buy the ticket straight away.

We continued our path towards the foot of the hill, she humming a tune to song, while I tried to book the tickets to the movie on my phone. I recognized the song as one of the song from Rapunzel, another animated movie. The sounds of birds and crickets played along to her tune as our path began to get narrower. She must love animated movies, I thought, as I squinted my eyes to choose the seats in the movie theatre.

“So movie later at 8?” I asked, when the screen on my phone asked for a confirmation. She enthusiastically nodded, and I pressed the confirm button. A email was then sent to my inbox, telling me that I have successfully booked two tickets to the movie, and 24 dollars has been charged to my card. Sometimes we really have technology to thank for making our lives so much easier.

Our path soon cut through a car park before we finally arrived at a gateway with the sign reading “Welcome to Bukit Timah” written largely on top. The path then considerably narrowed and far ahead, I could see it to begin slowly snake upwards. Trees that were much taller and bigger adorned the sides of the road. There were more people around us now too, each minding their own business. Most of them had either gray hair and wrinkled skin, or came together in family. Only me and Jenny seemed to be the boy girl couple there.

Not far from us stood a lonely building, standing guard at the bottom of the hill, just like what I saw from the various pictures found on Google. Built to resemble a traditional Malay village house, the house boast of wooden walls, attap roof and was slightly elevated from the ground. The building housed the information center of Bukit Timah.

There were several souvenirs and memorabilia sold there, as well as facilities such as lockers and toilets. At the bottom of the building was a huge rock painted with the exact same words that greeted us at the entrance. ‘Welcome to Bukit Timah.’ Seemed like the people here were really eager to welcome us, and afraid that we would forget the name of the place as well.

Jenny and I decided that we would not keep our bags at the visitor center, because we were not sure if we would came back the same path, and we were too scared to leave our water bottles behind. In the end, we carried our backpacks with us, which made us look very odd as compared to those who were around us. Jenny did not seemed to care though, as she happily strutted along the trail that lead to the summit.

There was one main trail that connects the main road to the top of the hill, and because we have never been to Bukit Timah before, we concluded that the best option was to try the main path first before attempting other more difficult trails. The forums on the web mentioned that there were a lot more trails surrounding the entire area, which were marked as moderately challenging to highly challenging. Not sure how they were classified, I thought it was not good to take a risk. Best was to start small.

Looking at the path that led upwards, I turned towards Jenny. “So, shall we start?”

P/s: I told myself that I will not play DOTA until I caught up with my word count. I played DOTA :/