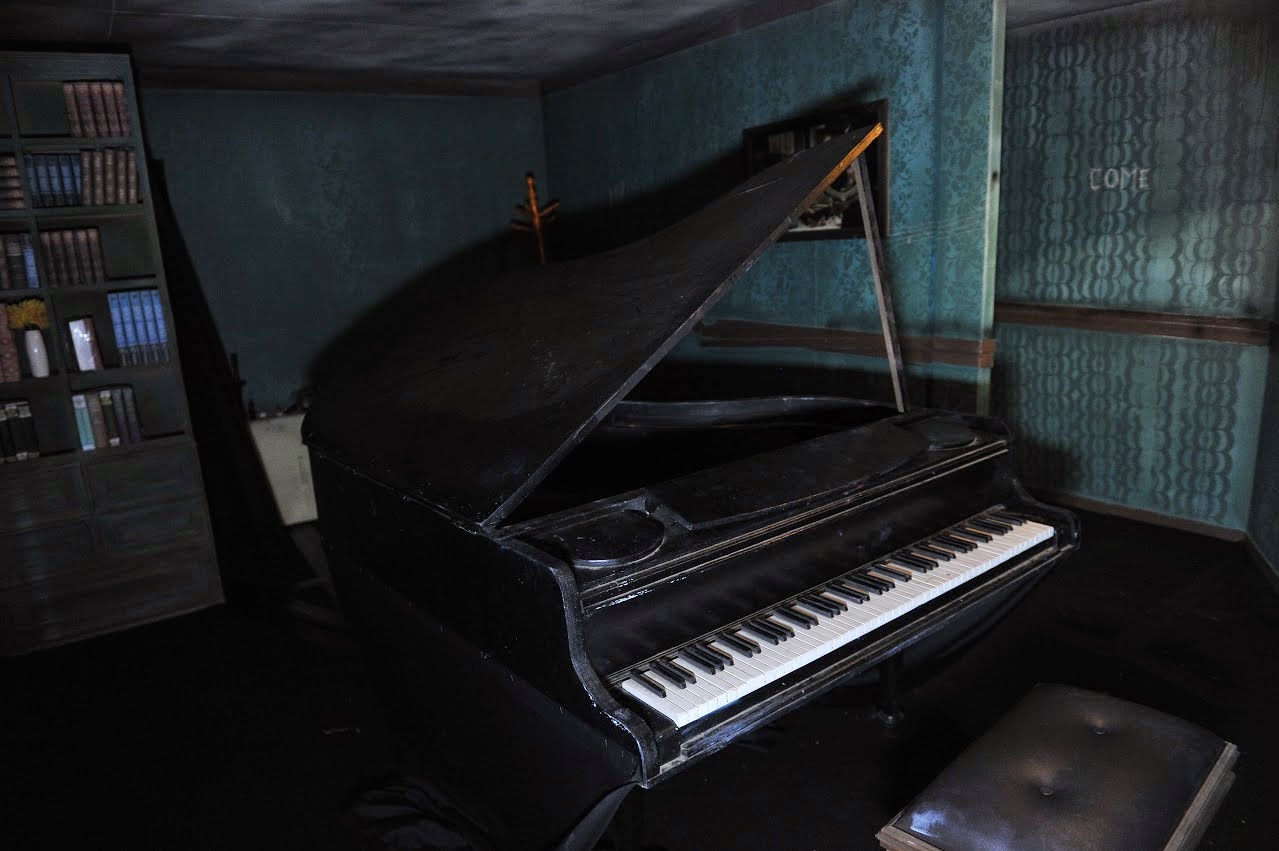 Our surroundings fell mysteriously darker as we stepped out from the corridor, into yet another room. Our eyes struggled to adjust to the darkness that surrounded us, to make sense of the new environment. As we took a step forward, something large caught our attention. It stood at the corner of the room, and from the shadows cast unto the wall, we could guess that the object was a piano. A figure was sitting on the bench, its figure moving skillfully along the keys.

However, like all the other beings that we met in this house, we could see dry blood caked below its eyes. Its clothes were torn, its skin wrinkled. The figure ignored us as we made our way past, continuing to produce ominous music from its fingers. Just when we thought there were no other surprises in the room, a face soaked in blood burst forth from the middle of the piano, shrieking at the top of her voice, its fingers reaching for us. Caught off guard, there was nothing that we could do, except to scream in terror. 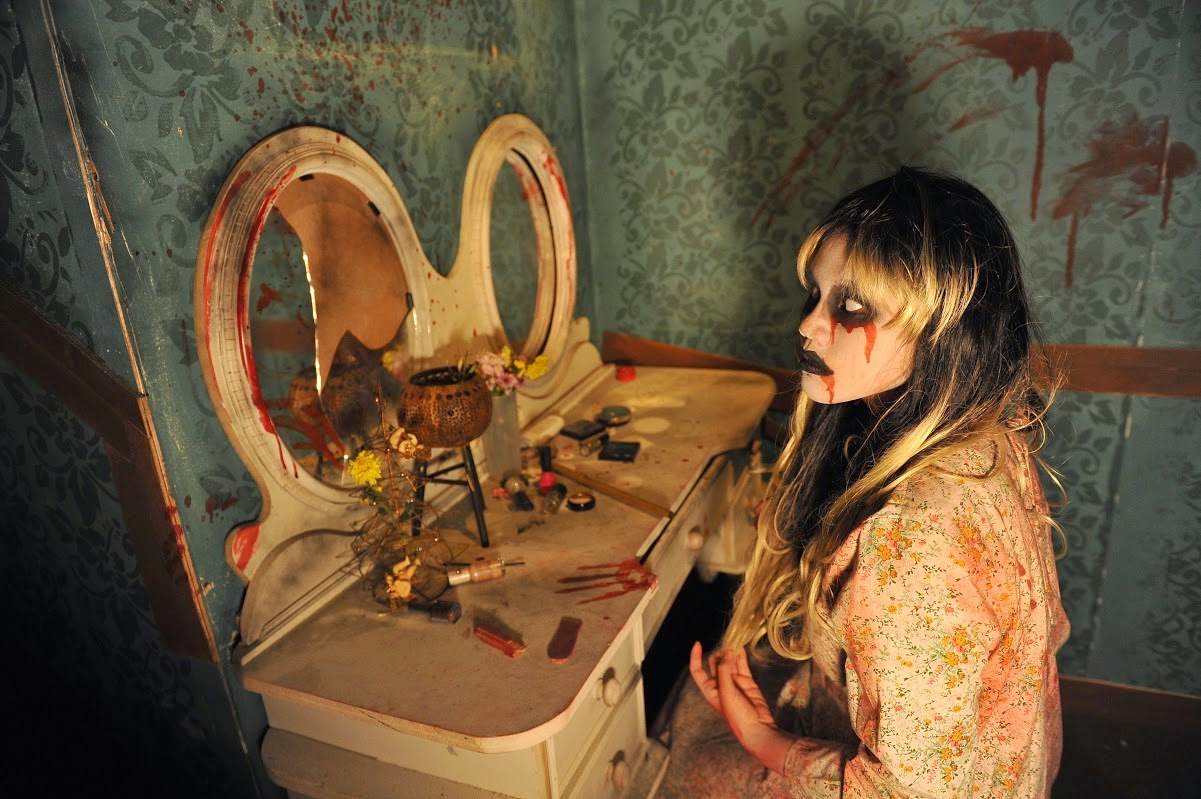 Luckily for us, it was not any real haunted house that we were trapped in, but rather one of the three haunted houses that make up this year's Sentosa Spooktacular. The ghost that gave us the fright of our lives was none other than the many scare actors that you can find around the annual Halloween festival at Fort Siloso, Sentosa. Laughing it off, we let the scare actor return to its position, ready to scare other unwary visitors, before venturing to explore the rest of the house.

It was the second time I am returning to Sentosa's Spooktacular, and I was looking forward to the whole experience of exploring different themed haunted houses again, while the whole time stifling the urge to scream every time I think I see something moving from the corner of my eyes.

Partnering with one of Thai's leading movie studios, GTH for the second time round, this year's Spooktacular borrowed its theme from Laddaland, the 2011 Thai horror box office hit. The entire Fort Siloso was transformed into a haunted village, where you find yourself walking along routes of abandoned houses, hanging corpses, cobwebs and the dead. I personally find that there was a lot more effort put into the decorations and props this year, because the entire scenery really brings out the creep in you. It made me feel as if I was playing Silent Hill itself.

Two of the three trails were themed according to two separate Thai horror movie, the first being the Swimmer and the second Alone. The third trail, Countdown, on the other hand was more focused on effects and lighting, in which you are required to walk through the trail while wearing 3D glasses, which gives you a surreal feeling through the trail.

My personal favorite was the trail based on the movie, Alone. The story tells about a woman who is haunted by her dead twin sister, and it takes place primarily in the house where they grew up together. The trail was a recreation of the house in the movie, where you have to walk through the drainage system, the bedrooms and right through the garden of the house. Staying true to the name of the movie, visitors to the trail could only walk in groups of three at most, which added to the terrifying feel of the trail. There were parts where the whole room was covered in darkness, and being the only two people in it, it was quite difficult not to feel scared.


The other two paths, Countdown and Swimmers were special in their own way too. Countdown was quite fun to explore as the path attempted to distort your senses, making you wander through oddly shaped rooms painted with neon lights while wearing 3D glasses. There was not much of a scare factor for this path however, because the path is mostly bright and you could see most of the things around you. If you don't count skulls hanging from the wall as scary, that is.


The Swimmers on the other hand, was another haunted trail that based its theme of a movie where someone died in a swimming pool, so naturally the path resembled a cross between a school and a swimming pool. There were quite a few interesting layouts along the way, like one where you need to walk below water and another were you need to squeeze yourself through part of the human intestines. The scare factor was only so-so, but the path itself was quite gory. And there was a cute ghost with very big head. Take note not to touch them though.


In summary, I found this year's Sentosa Spooktacular to be a fresh new experience as compared to last year's trail. The trails were much more elaborate and better themed, and the decorations around the place was also very well made. Laddaland was indeed a wonderful experience, with all the different haunted houses it had to offer as well as the creepy atmosphere.

My only complaint was the reduced number of paths they had this year and although each of it was more complex and longer, there's a risk that the queue may be super long given that everyone would be concentrated on these paths. Might want to consider the Fast Pass if you hate queuing. But I suppose the queue won't be as bad as USS Halloween Horror Nights though. Still it was a fun experience! Should definitely try it out if you're a fan of Thai horror movies.