The Dota All Hero Challenge #Day 41: I am gonna uninstall Dota 2 after this 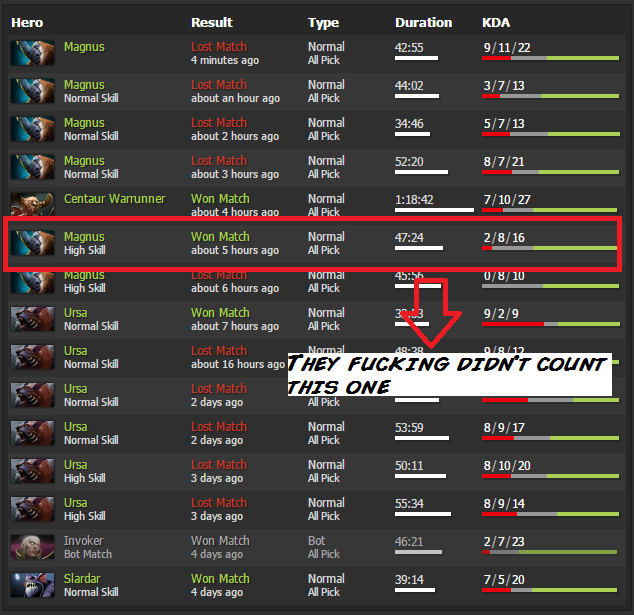 It's 5.36 am, 4 hours past my original intended sleeping time. My mind is blank, only the light from my screen glowed in the dark. The logical part of me had already asked me to stop 4 hours ago, but the primitive part of my brain urged me on, telling me that perhaps the next match may just be the match that I will finally clear Magnus. It didn't.

I feel like screaming, feeling completely like a fool how I have been duped by Steam to continue playing game after game, hoping for a win. Perhaps this is what addicted gamblers and those who played computer games until they drop dead literally experience. Keep on going until they reach that "high" of theirs. The fact that I already had one game where I actually won with Magnus, and therefore technically cleared the hero, was not counted because Steam servers were busy at the moment and messed up the mechanics.

If anything, the whole experience has left me hating Steam even more. It's scary how one more game became five more games, as I told myself that winning is only a matter of eventuality. Sooner or later, there will be a match where the opponents can't play for nuts if I kept losing. That's how Steam normally works, but not tonight. Match after match, the same thing happened. We would always start out good early in the game, but as the game drags on, the whole thing only became from bad to worst. I would have lots of kills from ganks, but as team fights increased, so did my deaths too.

I guess this is just a sign that either Steam hates me so much that it keeps giving me bad matchmaking, or I'm just bad at Dota. Either way, I have decided that once I complete this all hero challenge, I am just going to quit Dota. The pain is just not worth it. I may be better off playing singple player games, where at least you won't feel like pulling your hair when you're dumped into a losing streak.

Screw you, Steam and screw your matchmaking algorithm. And most importantly, screw your servers and your nonchalant attitude towards us players. I'm out.