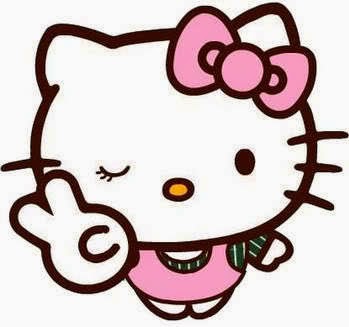 "She is NOT a cat," their face were stern, offended. There was no hint that they were joking from the tone of their voice. The rest of the room sat there, stunned. For more than 40 years they have all been deceived, living under a false impression. How ever are they going to tell the world? Everyone was at a lost at that statement.

"But..." a young man sitting in the corner finally broke the silence.

"I grew up watching Hello Kitty thinking that she's a cat. After all, she has "Kitty" in her name, and she has cat ears, whiskers and even paws. Features that essentially make her a cat, so if she's not a cat, then..." the young man tried to continue. From his neatly dressed looks and his stammering voice one could easily guess that he was new. Before he could finish his sentence however, he was abruptly cut off by Sanrio, Hello Kitty's parents and creators.

"She is NOT a cat," they repeated again, a lot louder this time.

"She never walks on all fours. She walks on only both her feet, a trait that is only done by humans. And she has a pet cat," they insisted firmly. "Haven't any of you read her backstory before?"

Everyone inside the room looked at each other. Apparently none of them has. To them Hello Kitty has always been a cat. She looked like a cat, acted like a cat. But little did they know that there is a whole bunch of people who looked just like Hello Kitty living in London itself.

"As much as we wanted to keep it a secret, I'm afraid that we no longer have a choice. It's time to tell the world," Sanrio said with a heavy sigh. Everyone in the room held their breaths.

"A long time ago, back in the land of ancient Egypt, cats were a revered creature, just as the cows are to Hindus. There was an entire religion dedicated to worshiping the cats. And like most ancient religion, there were a particular group, called the cat priests, that dedicate themselves fully to the service of their feline god. To show their dedication to their masters, this group of cat priests chose to surgically alter themselves to look like cats, and after generations and generations, the surgical modifications have became part of their genes. That's where you get your first plastic surgery too," came the explanation. You could feel the intensity of the room's atmosphere as the truth settled into everyone's mind. Who knew Hello Kitty had have such a long and rich history? What other secrets could the Hello Kitty family hold? Could they have been a ancient order of cat worshipers?

Everyone looked on at Sanrio, wondering what other secrets they may tell.

"Just kidding, we just hate other people calling our creation a cat."


In other news, Nintendo confirmed that Pikachu is indeed not a mouse, but an electrician rabbit, while Peanuts assured everyone that Snoopy is indeed a dog, but the title of their comic isn't actually a reference to the peanuts that you can eat. Rilakuma on the other hand was said to be Pedobear in disguise (a cuter Japanese version) while the rest of the world is gripped by the fear that their childhood was slowly being destroyed with such revelations.

Update: A day after the world was told the shocking revelation, Sanrio made another call to the gentlemen to the room, expressing disbelief at how they have circulated the news to the whole wide world exclaiming that Hello Kitty is not a cat.

"It was supposed to be an April's Fool joke, don't you get it? Hello Kitty is a cat!" came the exasperated voice at the end of the line.

"But sir, it's already August now," someone tried to reason with Sanrio, thinking how absurd it would be to tell an April Fool joke four months after it had passed.

"Which is why we told two jokes, because 4 x 2 = 8! August! And see you all in December, where we'll tell three jokes!" the line went dead before any of the gentlemen could reply.