Now is not once upon a time ago 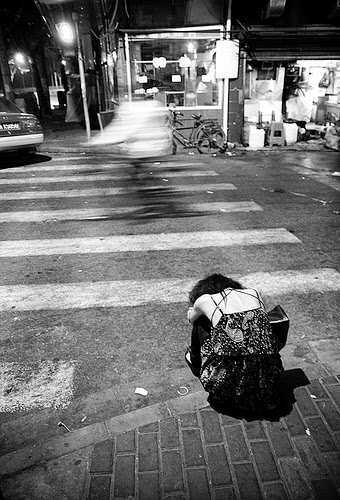 It has been what, two years? Two years since I last saw your name on my phone. A name that time has slowly buried away and seeing it appear again, brought back feelings and memories that I have forgotten for a long time. And after two years, the last thing that I would have expected from you is a call punctuated with sobs and sniffs.

"What's wrong?" I asked, but already I could guess. Rumours have been going around that you've broken up with him, the guy that I occasionally see appearing in my news feed. As your ex, it was hard not to ignore what others were saying, especially when we shared so many close friends.

"I... don't... know," you attempted to say, but you were crying so hard now that all I could hear was the sound of your sobs, mixed with the the sound of passing vehicles and people talking behind you. Were you outside, sitting on a pavement all alone, with tears streaming down your face, as strangers walked by, staring at you? Just what was wrong, I thought.

I got up from my seat and told my boss that I had urgent family matters, needing a day off. In my rush, I only took my wallet and forgot my bag, as I asked again where were you.

"Coco Cafe," you finally managed to say, in between breathes. And that's where I told the taxi driver where he needed to head. I told you to stay there and not go anywhere, because I was coming down. You muttered a soft "Okay", and we ended the call. Oh, how I've changed.

My thoughts went back to six years ago, when the same voice cried over the phone. We have gotten into an argument and in the heat of everything, I chose to walk away, and left you alone in the crowd. You called me in tears, saying that you're sorry, even though it was I who was at fault, asking me to come back. But my ego carried me on, feeling proud, oblivious to the fact that I have hurt someone who loved me so much. And I kept carrying on, drunk in my own sense of entitlement, taking you for granted. It was not until you said that you cannot take it longer did I wake up, realizing that having a big ego meant nothing when you're gone.

And then you met him, one year after we broken up. The charismatic sales manager working at a big firm. He had almost everything. Charm, talents, looks and future. Your friends told me that you've been rejecting his relentless pursuit for almost a year. They also told me that he had been eyeing you since the day we got together, that son of a beach. But you finally got together with him, maybe you got tired of waiting, perhaps you wanted to move on.

Your relationship looked sweet from the start. I would see pictures of you and him occasionally on Facebook, perhaps having a dinner, or on a holiday together. You were smiling again, something that I have not seen for a long time. And I have forgotten how beautiful you looked when you smile. It was then when a tinge of regret appeared. That perhaps I had been an idiot after all.

But six months into your relationship, problems started to appear, I heard. Friends asked me to check on you. But not wanting to be the third party, I held my ground. Until today.

I spot you sitting on the sidewalk, people walking hurriedly around you. You had your head in your arms, and I assumed that you were still crying.

"Hey," I said, and you looked up. Teary eyed and tired, you gave me a weak smile.

"Thanks for coming," you said weakly, before pulling my hand to stand up. We head into a neighbouring cafe, because you said that Coco Cafe reminded you of too many sad memories. And I agreed. It was not until your ice lemon tea arrived that I finally knew why. Coco Cafe was the place where you frequently hung out with your ex, and also the place where you finally found out that he was cheating on you. Passing by today, you saw his back facing the window, his arm caressing his new girl.

Once upon a time ago, you gave your heart out to the world. You loved freely, smiled freely. Your heart was open, innocent and naive. It was a pure heart. But the world took that heart of yours and trampled on it, mangled it, and shattered it, leaving only a million of broken pieces in its place. It gave no mercy to your heart. I was part of the world. I was one of them. And you deserved none of it.

So you built a wall around your heart, and sealed the path to it, determined never again to let any other person exploit it. That was your friends have told me. That you have became cold, distant, indifferent. Long gone was the cheerful girl, who brightened up the lives the others, who gave everything she had, expecting nothing in return. People were worried about you.

As I looked at you quietly sipping your tea, your eyes still red. It pains me to see how blind and selfish have I been. Where you gave your love, I took it as a source of suffocation. When you were concerned about me, I returned it with a sigh of annoyance. I thought I was constrained, and I wanted freedom. But now that everything that used to be you is gone, I am starting to feel that this freedom that I've got is nothing more than abandonment. I missed how you used to climb unto my back and peeked over my shoulders to see what I am doing. I missed the way you would keep calling me dear until I replied, then giving the most beautiful smile that I have ever seen when I grunt in annoyance.

Moments of silence passed, as we continued to sit there, each of us lost in our own thoughts. I was wrong to let you gone once, to have broken your heart in the process, and to let another guy do even worse to you. I could see the your heart behind the cracks of the walls you've built, plastered and bandaged all over. It is hardly surprising that after all that, a tall wall usually rise in the aftermath. After all, it's the normal reaction. Who could blame you?

"Want to watch the latest movie in town?" I finally piped out, "It has a flying hamster with magical powers. And I remember that hamsters are your favorite."

You gave a small smile in response. Perhaps you were surprised that I remembered your favorite animal even after so long. I guess that's a way to cope with loss. Revisiting old memories from time to time to remind me of you, until those memories themselves become ingrained in me.

"Why not?" you said. "It's better than sitting around here moping anyway." The optimistic side of you.

As we left the cafe, I made myself a promise. That I would try and make you smile again, like you have always done. That I would attempt to correct the mistakes that I have made, and at least give you what you have always deserved. I would scale the walls that you have built around your heart and I would try and bring them down. We have all wandered enough, and I can't help to feel how stupid I am to have not realized that what I have been searching for, has been always in front for me.

"Eh, don't be sad already, today will be a good day," I said, as I noticed you looking distantly into the sky. I smiled, and you reluctantly forced a smile back. Not only will today be a good day, but I will try and make the rest of our days good as well.