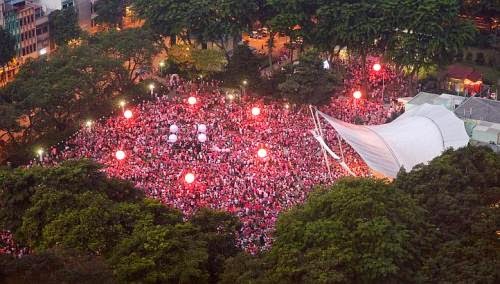 The LGBT issue in Singapore has always been one of my favorite topics to write about. It is an issue that continues to dominate the attention of the general Christian agenda not only in Singapore but also in the larger world, in that it has become sort of like a battleground for the religious to assert themselves, particularly the Christians. And being a Christian myself, I have always been strongly against the mainstream approach of openly criticizing and ostracizing the LGBTs, as I felt that it does not reflect the main message of Christianity, of what really matters. And tying in to a larger picture, how we Christians have engaged the LGBT community was part of the reason why I have lost hope in Christians a long time ago. It was an issue that I am passionate about.

So when my cell group, or care group, of a church that I have been attending recently asked if there was anyone who was interested to join in a discussion about the current LGBT movement in Singapore, I immediately said yes. I wanted to see for myself how normal Christians really feel like, and whether would they be a hate filled session.

But to my surprise, what actually happened turned out to be way much more different than what I had expected, or what has normally been portrayed in the mainstream.

You see, the first group was given the task of writing a letter to explain to a Pink Dot supporter on why we as Christians think that LGBT and Pink Dot is wrong, and somehow it sounded no different from how the usual response always sounded. Judgmental, shallow, impersonal and a "I am more self righteous" tone. When they first read it out, I was like okay all my fears about Christians are confirmed, and I made a mental note about never returning again.

However, when the second group was asked to share their letter that I was stunned. Instead of explaining why as Christians we should oppose Pink Dot, they had to explain why should support the Pink Dot instead as Christians. I don't know about others, and I may be biased, but I thought that the second letter spoke more of love and acceptance, and you could feel the whole room quieting down to the letter's response.

In the discussion that followed, a lot of ideas were thrown around, there were debates going on, and it was heartening to see fellow Christians discuss about what's right and what God want us to do, and all in a civil manner too. Different viewpoints were taken in, considered and addressed. And never once did anyone said about condemning anyone to hell. It was more of a struggle of loving everyone but yet not completely betraying the bible as well, though that is still debatable.

But I guess my biggest takeaway from the whole episode was how relaxed I felt even we were discussing such a heavy topic. And the sense of community and spirituality that flowed during the discussion. And throughout the entire time the 10+ of us were pondering and sharing about our viewpoints, the lead pastor of the church sat silently at one side, listening in to our conversation, without once budging in to our ongoing discussion. I had this feeling that he was listening, instead of just barging in with his version of right or wrong. He wanted to know what we felt

It's funny though, how life works. All along during my five years here there have been a little voice inside my head that has been urging me to find a church and settle down, but all along I have been giving the excuse of not liking the churches here because they're too corporatized and impersonal, in that everything is done in a systematic and efficient manner rather than a loving manner. Christianity in Singapore I felt was no different that a corporate organization, where everything is structured and efficient. It did not have the loving touch, I felt. It was too judgmental and hypocritical, like the pharisees of the old

I told God that if he could show me a church where everyone was accepting and non-judgmental, where the culture allows for individual voices to thrive and allows debate, then I would settle down. I wanted a church that was something like the old, during the early days, where churches are more like families, small and where people supported each other. Where discussion was allowed. Sitting there listening to how they talked, I guess God did prove to me that churches like this do exist, and He just happened to throw me into one. So I guess it's my turn to fulfill my end of the bargain

Of course, I still have my own opinion, which I was too afraid to say out during the discussion I have always been a strong believer in free will, and that one should not be dictated in how we should love. I believe that everyone should be allowed a free choice to choose, and that if there's something that is really wrong, our close relationship with God will help us see that. The holy spirit will help us see that. That's not to say that we should condone actions that we think is wrong, but we should not actively persecute.

I think that one of the leaders in the cell group put it aptly in saying that whatever actions we choose to do, we must do it out of love, not fear. No matter if we choose to rebuke or to ignore, it must be because we love them, not because we fear that they would threaten our way of life or our culture. The actions stemming from this two emotions differ greatly, in that one pulls people towards you, while the other pushes people away. But sadly, from the Singapore episode, it seems that most of us are reacting in fear, we are afraid of the LGBT community, which is why we try to limit them and oppress them, causing them to want to fight back harder. And that is not right, because the central tenet in our belief is that we must love everyone, regardless of who they are. Prostitutes, loan sharks, criminals. Everyone