1. Today was Sunday, the day that I usually get sad, because the next day would be work day. But I was not today, because tomorrow is a PUBLIC HOLIDAY!!! Woohoo! Of course I would still need to go back to work on Tuesday, but right now, who cares?

2. So I've finally got to the social part of Ingress, where you actually meet up with people to do Ingress stuff like capturing portals, leveling and helping people farm. It's kind of eye opening though, to meet real people who are playing the game, and see who they really are

3. The sad thing about the social part of Ingress is that you can't seem to talk about it, which is why I'm like trying to omit details here. They say that people tend to get very hostile and stuff over games like this, with people taking your photos, stalking where you live and shit like that, which is a part that I don't really understand. I mean after all it's just a game, so who cares if your portal gets taken over? I guess when you start mixing personal ego with games you tend to get much more defensive and stuff

4. Anyways, sorta went to train some lower level players today (sounds so nice right) and in the meantime met two opposing faction players as well, who were quite stunned to see us. Kinda amusing how the whole encounter went, sorta like we were going to fight like that

5. I may get shunned or banned for posting this blog post in regards about my Ingress adventures, but I think that if people are so secretive and hostile and stuff like that, I rather fly solo. Because after all Ingress is about fun, and if the other faction wants to push you until you cannot farm and stuff, the worst case scenario is everyone from the bullied faction just stop playing. What's the point of the game when you got no one to fight right?

6. Had the opportunity to attend SMU's Voix 2014 acapella concert, which I must say was surprisingly good in terms of their musical talents and chemistry, and much better than the last acapella concert I went to generally. Enjoyed myself really much listening to those music, plus they had a good mix between different songs as well 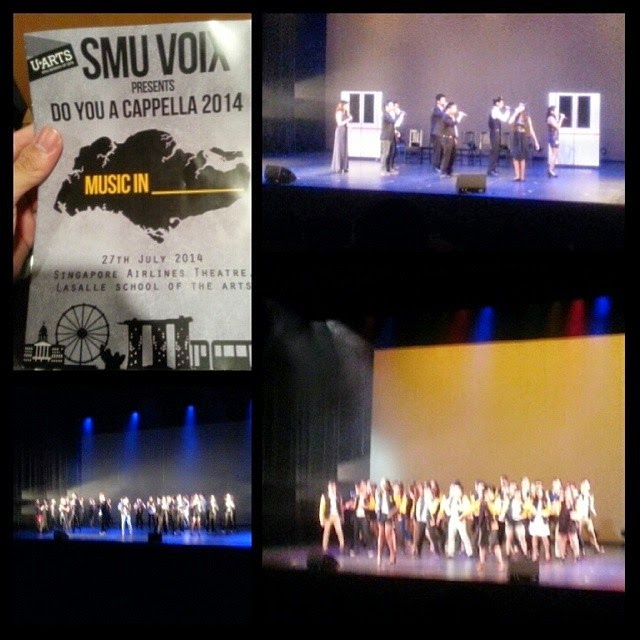 7. The only downside was that most songs were not a mashup and I suspect that were not arranged by them, but still the performance was great and entertaining. So I got that going for me, which is nice

8. My only other complain is that I don't get the emcee's act that chose to make fun (I would use the word insult, but that would be too harsh already) of a particular blogger during the show. I admit they were entertaining at times, but I felt that their performance did not highlight the concert that was supposed to be going on (no introduction to the songs or whatsoever) and some of the jokes were done in very bad taste. Like the ones poking fun at the blogger's plastic surgery and private parts #dontgetit

9. Dota: A game where you play til 6 am. And forget about all your appointments tomorrow

10. Watched Turbo. Which turned out to be a surprisingly awesome movie. The jokes were lame enough to make you laugh and the story engaging enough to keep you glued to the screen. Dreamworks is seriously upping their ante in challenging Pixar and Disney, and that's glad to see

11. But then again I can't help but to think of all the stories where the hero wants to be someone that they are not meant to be, or society says that they can't be, and wonder if they apply to life? The snail who wants to race, the panda who wants to learn kungfu, the cute monster who wants to be a scarer and the bad guy who wants to be a hero. All of them despise the role that were given to them, and were shown that if they tried hard enough, they will succeed. Ah the illusion that we feed our kids to make them have a glimmer of hope in life. Such deceive #doge

12. Halfway through Khaled Housseni's Kite Runner and I must say, even though I hate the main character so much and could not understand why I still read the story, I cannot tear myself from it. Page after page I have to just keep flipping. That feeling when the story sucks you in

13. With that being said, I wonder if Icould write an alternative story to the Kite Runner? Where the main character was at least more likeable? But I guess that's how good stories go The main characters are not overly perfect and have flaws in them

14. I promised 20 thoughts. But since it's already close to 7am, I think I should sleep before the sun rises

15. Btw to the person who chose to sing Switchfoot's Dare You to Move in the Voix concert, I implore you to upload the recording to Youtube! That rendition is just so off the charts!

16. Now that we're back to talking about concerts, am I the only one here who hates people who shout like crazy (I mean once or twice is fine, but not to the stage where the performers cannot start because your voice prevents them for sound checking) during concert?  Like the super crazy type like they are getting raped like that? Ugh