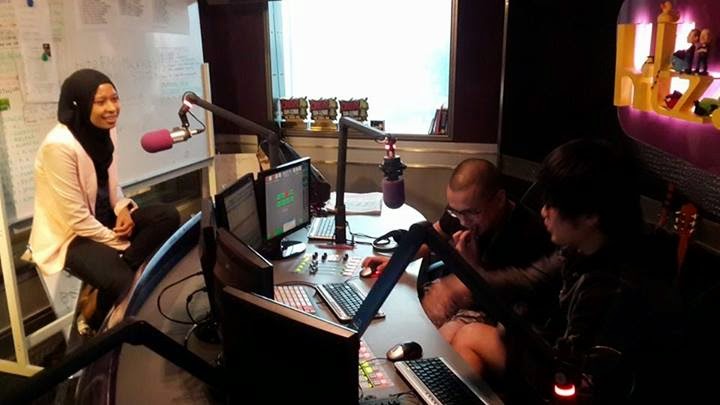 KUALA LUMPUR, 17 Jan - The whole of Malaysia came to a standstill today when Malaysians realized that the easiest way to score yourself a radio station interview is to be (in)famous. Armed with steering locks and smartphone cameras, people were bashing at cars and other public properties, in hope that their videos would go viral as well. This move came in response to the recent interview conducted by Hitz.fm, Fly.fm, My.fm and Era.fm of Kiki Kamaruddin, who became an overnight sensation when a video of her verbally abusing an old man and hitting his car with a steering lock was posted online.

Lock Steer Ling, one of the thousands of Malaysians who were seen busy bashing up an unsuspecting family's car while her friend filmed her nearby, had this this to say, "I have always tried calling the radio station and going for audition in hopes of appearing on my favorite radio station, but I always get rejected. If I had known that acting like a hooligan would score me an instant interview with not one, but FOUR radio stations, I would have so done this a long time ago. Now I feel stupid for apologizing the last time I got into an accident."


However, most radio stations, surprised with the response that they're getting, said that they are already planning to move in  new direction in order to increase their viewership.


"Unfortunately most of our interview slots now are full for steering lock brandishing ladies, and with so many other radio stations doing it, we are thinking of moving forward," said one Hitz.fm spokesman.


"In order to make our radio station the most hit and trendy one, we are thinking of coming up with a whole new series called the "Hit Series", where we will feature people who hit their kids, hit their spouses, hit their pets and hit anything else. Then we will act as the mediator and get them to say sorry on air, hopefully making our listeners touched with their stories," the Hitz.fm spokesman added, in elaborating the "Hit Series".

In response, Malaysians are already resorting to other crimes such as vandalism, public property abuse and loudly arguing in public, in hopes that some radio station will decide to report their story.


On a more serious note, at the time of writing this post, the radio stations have yet to come up with an official statement in regards to the netizens response about their interview, choosing to remain silent over the whole issue. It has been more than 12 hours since netizens have been in uproar over the incident, but all of the radio stations Facebook page have yet to respond to netizens' general unhappiness. Instead they're just posting usually like nobody's business, ignoring all the tons of negative comments. Fly.fm even has the tendency to attempt to trend the hashtag #ForgiveKiki. What's there to forgive, now that you've made her even more famous?

I don't know about you, but I find their PR skills to be sadly lacking in response to this matter. Maybe they were caught off guard by the host of negative response, but this ignoring them clearly isn't the way to handle such a situation. One cannot simply ignore the negative comments and hope that people will forget. The lack of response makes people think that you're not caring enough and worse still, your whole attempt at marketing may backfire badly on your company.

But of course, this is not the first time a company in Malaysia has struck the wrong chord with netizens over the social media though, there are numerous other examples, but I am interested to see how the radio stations would react in response to this crisis. And the company that walked away smiling from this entire thing would be DiGi I guess, with their quick response in offering help to the uncle.

Social media marketing is one tricky business, in that you can never gauge the response of netizens, but if shit does happen, there should a crisis response team to deal with the backlash, because after all, the people are your customers. In terms of social media response, I still find Malaysia's major companies PR team to be lacking in comparison with their Singapore counterparts, especially in light of negative responses.