Why I Don't Bother Posting About Malaysia's Issue

So I have been posting quite frequently about the Pink Dot issue in SG (I am somehow still hoping to go down on that day, though it would seemed that the need to isn't as apparent now, but still I would want to) and some friends have been asking me why I have not written anything about what's happening in Malaysia instead, my own home country. If you don't know about it, the recent decision by Malaysia's Court of Appeal to ban the usage of the word Allah by Christians have been causing a lot of controversy, with two sides taking a swipe at each other at the issue. 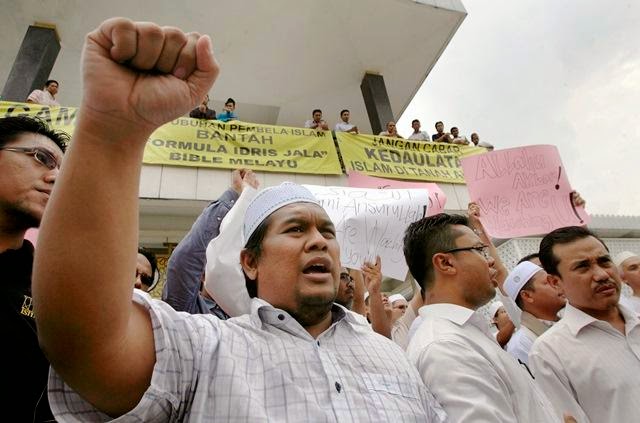 But for all that I care, I don't care. There's plenty of reason to be upset and disappointed at it, but in my honest opinion, writing about the issue anymore would not change anything. It's like trying to make the weather colder by opening your fridge door and blowing it outside. It's useless.

For starters, Malay racism has been so entrenched in the minds of normal Malays that a mere few articles can never change their mind. What more if the article is written in English. There's tons more of racist articles out there on the web, which are far more appealing because they are written in Malay.

Besides, human's cognitive dissonance is a wonderfully idiotic mechanism. As most psychology research can tell you, humans would want to look for things that confirm their beliefs, which means that only the English educated critical thinkers would read articles which are posted in English criticizing the government, while the more conservative Malays would flock to the racially toned articles. Just take a look at the comments section on both these type of articles and you would see a ton of difference between them.

In addition to that, no human would like to be told that they are wrong, and no human would prefer to read things that opposes their initial belief (to protect our self esteem), which is why we would rarely cross over and read articles that are contrary to what we already believe in. When searching for things to read, we often search for things that confirms our beliefs, not disputes it. Even if we do end up reading something that opposes our beliefs, we would be overly defensive over it. Hence why you often see many emotionally charged comments being fired here and there.

At the end of the day, what you would get is more polarization of the two groups of people as each flocks to their own articles preference and at the end of the day, those articles solve nothing. If I would comment, reading articles online is nothing but a masturbatory action, where you make yourself feel good by reading articles already confirming to your opinion. That is what most of us do when we already have an opinion formed in our minds.

The country has already embarked to a point of no return, with such deep fragments in the society, and the closest example that I can equate the country to is a ticking time bomb. One part of the society are already so entrenched in their Ketuanan Melayu mindset that asking them to change would be asking the wolves to become vegetarian while the other parts are too powerless to change anything because they're the minority.

Malaysia is already too long gone, which is why I don't bother anymore.