How I Would Have Changed Maleficent

There has been a lot of buzz surrounding Disney's latest movie, Maleficent, since it premiered. Some commentated at how dumbed down the story was as compared to the original, while others took issue with the subtle hinted "rape" scene. I have never really watched the original Disney's Slepping Beauty prior to Maleficent, so I have had no comparison, but after reading the story again, I can't help with the view that indeed the story has been dumbed down. A lot. 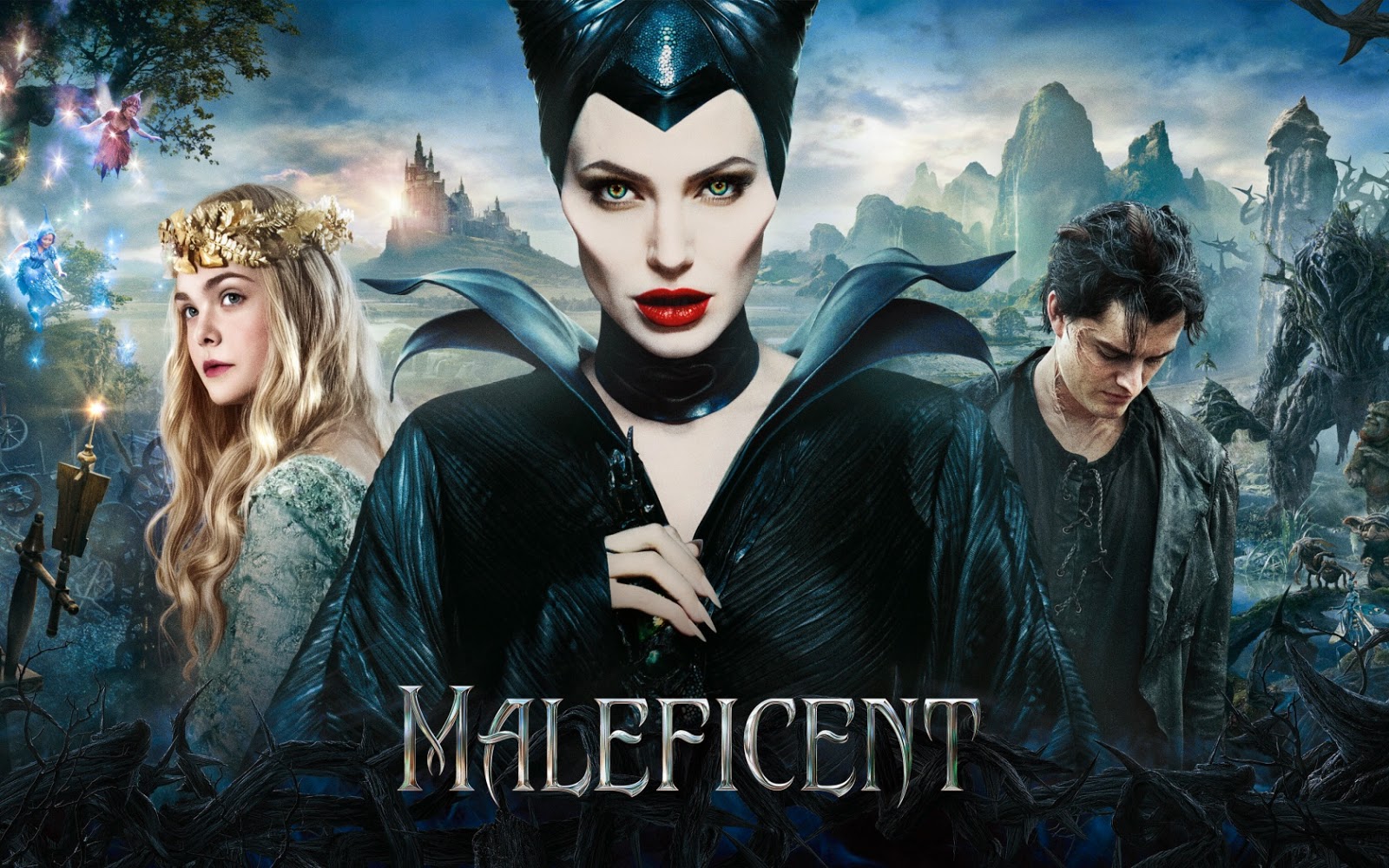 The movie took some of the most iconic features of the story and threw it away, for example the third fairy's gift that toned down Maleficent's initial curse, Prince Philip's daring rescue, and keeping things that ultimately didn't make sense intact in the movie, like the presence of the three fairies, the bramble thorns wall or Prince Philip kissing her as well. I mean why import the Prince Philip character when it could have been any guy? Or why the bramble thorns wall that you just put there just for the sake of putting there? I mean if you are content with changing stuff like omitting the ever so important third fairy's gift and the whole castle sleeping with Aurora, might as well erect a stone wall instead right?

Not to mention that the film adds some character that is ultimately there for no reason at all other than to provide some comic relief (ie the crow)  and the ultimate one "dimensioness" of all the characters. King Stefan is perpetually evil, Aurora is perpetually happy, the fairies are perpetually idiotic while the character development in Maleficent is almost non-existent. One moment she's grieving, and another moment she's suddenly evil but and want plot revenge? Why wait until a baby girl is born, anyway? Like whut?

And did I mentioned how the fairies are supposed to be at war with the humans, and how suddenly the three fairies, who at the start of the show were fearful of the humans, suddenly decided to bless the baby with good enchantments, when they know fully what has been done to Maleficent? Isn't that some act of betrayal?

If I could change the story, this is what I would have done, to at least make it so less into your face "Here this is a story about a villain turned good, where obviously she's the only victim here while others are just for decoration purposes" type of story:

Stefan would have still come from a poor family, but instead of being the only poor orphan, he would instead have a younger sister, whom is sickly most of the time. He is the only one who can take care of her. One night his sister's sickness got worse, and he became desperate. Hearing that the water from the Moors had healing properties, he decided to go there and steal it, which is where he met Maleficent.

"Please, my sister is dying," he would say, and seeing how desperate he was, Maleficent relented and let him be. He managed to save his sister, and the water from the Moors sustained her. She was still sickly, constantly needing care, so he had to make frequent trips for her, and that was where his relationship with Maleficent grew, just like in the movie. He would have moved her to the Moors if it was possible, but her condition prevented him from doing so, for the time being.

However, the animosity between the humans and the Moors kept growing, until one point in time it became tough for Stefan to keep travelling between the two places, and his sister's condition worsened.

The king eventually decided to launch an assault, where Maleficent decided to try to reason with the king, due to her past experience with Stefan (another part where I did not understand in the movie was how come she suddenly became so fierce to humans?), but the creatures of the forest warned her of human's cruelty. Still knowing Stefan, she believed that humans do have a good side, but when she went to negotiate with the king, she was ambushed, and was saved only by the sacrifice of some of the fairy creatures.

It was from there where her attitude to the humans began to suffer and in the battle next day, she utterly defeated the kings army, which caused him to hate Maleficent (just like the movie aka JLTM).

In the King's rage, he heard that a peasant boy had close relationship with the Moors, and decided to ask him for a way to defeat the Moors. Stefan initially refused the offer, not wanting to betray Maleficent, but ultimately was blackmailed by the king by holding his sister hostage. He promised to help the king, but instead went to Maleficent and pleaded for her help, as his sister was fast dying and the king is threatening him by using her. Maleficent, still angry at what the humans did, refused to do so, no matter how much Stefan pleaded.

When Stefan arrived back to the human place, he found out that his sister was getting worse, and the king's magicians told him that at her stage, only a fairy's blood could save her. The king also mentioned that if he succeed in killing Maleficent as well, he would award him the throne and his daughter's hand as well. Seeing that he do not have not many choice, Stefan agreed.

"I will help you kill her," he said. And he journeyed into the Moors using his previous knowledge, and decided to strike down Maleficent when she slept. Knowing that fairies feared iron, he brought and iron netting with him. He managed to trapped her and wanted to kill her on the spot.

But just when he was about to brought down the knife, he realized that he still loved her, so he relented. He cut off her wings instead, and drained some of her blood from there. JLTM, Maleficent felt betrayed, and vowed revenge against him for what he did. When Stefan reached back the camp, he found out that he was too late, and he sister had died. Seeing that he had lost two things in one night, Stefan changed. He demanded the throne. He realized that his lack of power was what drove him into this state in the first place, and he vowed never to let anyone or anything step over him again. The first thing that he did was to order his troops into the Moors.

Because of his prior knowledge, he knew the weakness of the Moor's armies, and for the first time in human history, he managed to drive the defenders of the Moors back. The humans managed to make significant headway into the Moors and before they could completely overrun it, Maleficent cast one last magic in a desperate attempt to save the Moors, raising a wall of thorns to stop the human's advance.

Seeing how her beautiful home has been defiled by the humans, Maleficent vowed never to trust any humans again. And on the other hand, Stefan realized that only through power will he earn respect, and vowed never to trust anyone but himself again. It was that moment where love turned into hatred, and where the relationship between humans and the Moorites (as how they called the creatures of the Moors), tooka turn for the worse, just like Maleficent and Stefan's relationship.

As the years passed, the two kingdoms lived in relative isolation, marked occasionally by border skirmishes. There have been no official contact between the human and the Moorite kingdom, until one special occasion. The birth of Aurora, King Stefan's daughter.

A grand celebration was put into place and sensing an opportunity to once again bridge the relationship between humans and Moorites, King Stefan decided to invite the four fairies of the Moor to the celebration, the red fairy, the green fairy, the blue fairy and the black fairy, Maleficent. The king hoped to make amends. However, knowing that the king and Maleficent once had a relationship, the queen secretly threw her invitation away, hoping that she would not step foot in the kingdom.

Sadly, word travels fast in the Moors, and when Maleficent found out she was being excluded she crashed the celebration, JLTM. The other three fairies urged her to not strain the relationship between humans and Moorites any further, but Maleficent refused to listen. The king tried desperately to explain that he indeed sent an invitation to her, a story that Maleficent thought it to be a lie.

"Take me instead," said the king, as he begged Maleficent to not cast her curse. "The baby is innocent."

"Just like how you forever took a part of me away, my heart, my wings, so I want you to suffer the feeling of losing something precious as well," Maleficent exclaimed, before casting the curse, cursing Aurora to die on her 16th birthday. And she left, reveling in the sorrow that she had bought.

The three fairies, in an attempt to repair the situation, promised to hide Aurora for 16 years and one day, to try and shield her from Maleficent's curse. The green fairy, who had not casted her spell, also changes the curse from death to a deep sleep instead.

From here on I think I will leave everything back following the movie, though I would have Maleficent participating more in Aurora's life instead of just being a voyeur. She eventually comes to accept that Aurora is innocent, but because of her hatred for Stefan, stubbornly refused to change. Stefan on the other hand, instead of being just locked up in his castle, journeyed numerous time to the Moors to plead with Maleficent, but will each time be driven back.

And my ideal ending, in their hatred, Maleficent and Stefan will have a bitter battle, a final showdown of sorts, where they almost kill each other, only be stopped by Diaval, the crow.

"Is this what Aurora would have wanted?" he would loudly proclaim, as he rushed headlong into the battle, just right before the final blow is struck. His words tore through their hearts, as they realized they have allowed both their hatred and anger consume them for years. It costed them so many lives and brought so much destruction. In the end, both Stefan and Maleficent embraced each other on the battlefield, tears running down their face.

As they stared down at Aurora, tears still brimming, both of them said sorry to her at the same time, and promised to never let hatred consume the kingdoms again, to honour her memory. Holding hands, they both kissed Aurora at the same time. And guess what, BAM! True love's kiss. Both from the father and the godmother.

And Stefan having realized how far his thirst for power has caused him to fall, relinquishes his throne to Aurora, and Maleficent did the same too. Both Stefan and Maleficent ride out to the sunset, as Aurora looked on, while the inhabitants of the two kingdoms cheered as peace has finally been brought. The end!