The Myth of the Honeymoon Period 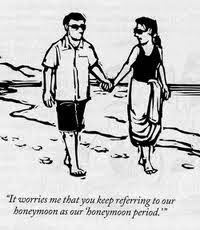 However, what if I tell you that this so called honeymoon period is not constrained into only relationships, but rather in every aspect of our lives? What is I say that being happy during the initial period of your relationship is reflective of a basic human process that we undergo everyday? And with that being said, it is dangerous to view relationships in parts and phases? Do a quick google search and one will find that a lot of people try to weigh in on this honeymoon period thing, giving advice on how to cope with the relationship after the honeymoon phase.

The thing is, the honeymoon phase exist for everything in our lives, not just relationships. Take for example when we acquire something new in life, say a new phone, a new shoe, a new laptop or a new car for example. In the first few weeks or months after our new purchase, we are ecstatic. We proudly show off our new toy, and happily explore the new features of our new possession. We tinker with our new phones, take our new car out for a test drive or wear our new dress off to show off.

Unfortunately though, like with every new things in our life, we tend to get used to it pretty quickly. Known as the habituation process, a well documented and researched on topic in the field of psychology, we humans have this uncanny ability to adapt (habituate) ourselves to almost anything. It's one of the features that allows humanity to survive and adapt into any situations, but it is also one of the reason why we tend to get bored of our new possessions quickly. It's also the reason behind our constant need to acquire new and "better" things, taking for granted what we already have.

The same applies for relationships.

When we are in something new, we tend to get excited by it. The first kiss, the first hug, the first experience of having someone to talk to late into the night and having someone new in your life is undoubtedly fun and happy, if you have been single before that. However, as time progresses, the freshness of all the firsts pales off pretty quickly, as we lapse into a comfort zone, taking everything for granted.

We may start to notice things that was previously blinded by the excitement of the new experience, for example a bad habit, or to use the case of material possession, the camera of your new phone was not as good as advertised, and we may start to grumble and complain. This is where the "honeymoon period" usually dies off. It doesn't mean that the feelings or the dynamics of the relationship have changed, however, your spouse may love you just as much as the first day you started, or perhaps even more, but you just got used to having him/her around, and it doesn't feel so special anymore.

Suddenly it becomes normal for you to be in a relationship. And we all know how normal is usually associated with boring, and for some of us, we may crave the excitement from meeting someone new, of discovering a new thing, and hence we would want to exchange what we have know for something better. In the case of material possessions it's logical, given how technology generally improves over time, but the same logic doesn't apply in relationships. The new person may seem better in a lot of ways, but that may just be our hormones kicking in.

The honeymoon period is in fact a period of when our hormones is craziest, tricking ourselves to believe that the period is sweetest. It is after when our hormonal production has slowed down that we begin to use our brain more, and it is only then when we actually find out that, well, our so called fairy tale was not so fairy after all. Like they say, when emotions are in play, our brain usually goes to sleep.

So how does one counter the effect of this so called honeymoon period anyway? How do we fight the effects of our hormonal imbalance?

For starters, do not get into a relationship so quickly. Let the initial excitement die down down first, before deciding if you want to get into a relationship with someone. I noticed how a lot of people emphasis the importance of feelings or attraction, the butterflies in our stomach or the increased heartbeats in deciding who we get together with, but often we do not realize that our body is tricking us with this.

It's nature way of trying to get us to reproduce quickly without thinking too much, as our feelings often disrupts us from making logical decisions. It masks us from the important details that we would have otherwise considered if we are not emotionally caught in the moment. I'm sure you can easily remember a time when you made a bad decision when you're emotionally overwhelmed, which is why it is never good to decide on a life changing decision, for example finding a life partner, just because you have this attraction towards this person. Like it or not, the initial feeling of attraction would die down eventually, once you got to know the person better.

Besides, have you ever noticed how during the first impression, it's always the looks and outward appearance that matters more, rather than more important qualities like beliefs in live, relationship skills and personality? Because when we are emotionally charged, our brain tend to falls back into more primitive ways of thinking, relying on unreliable cues like good looks to help us determine our choices, rather than using the logical part to decide how this person would be like 20 years down the road.

Which is why it's always good to let the initial attraction die off first and to start a relationship from being good friends. The belief that all epic relationships start from epic friendships is a good one, I believe, because it requires you to make a decision once the initial attraction has died off, on top of all the aspects of the person you have already know. There's no mystery involved, and the decision would really fall back on the things that really matter in the long run; how you all talk, the beliefs that you all share, for example.

On top of that, I think that the honeymoon period is not something that only happens as a one off event. As long as you keep creating new memories and experiences together, you can sustain the freshness of the relationship. In a way, you keep creating new "honeymoon" periods. Happiness, after all, can be induced and cultivated, all it takes is a little bit of effort. Go for new trips, pick up a new class or try out new things, and you can replenish the feelings of freshness and novelty every time.

At the end of the day, perhaps what matters most is your compatibility with your partner in the long run,  that being the deep stuff like aspirations and world view, because after all, our emotions and feelings can be cultivated, whereas qualities in a person is much harder. It's much easier to make yourself fall in love with a person, rather than to change who a person is deep down inside. Besides, everything good in life takes hard work, relationships especially.