I was running late for a workshop today and in desperation, I logged on to my Uber account and got myself a black cab to fetch me to the place. Desperate time calls for desperate measures, as they say. I thought it was going to be a normal taxi ride though, where the driver would quietly send me to my destination, drop me off so we could both continue on with our lives, but things did not turn out that way.

In the end the driver ended up talking a lot, and because it was in the nature of my job to listen, I listened to him and prodded him on. A action that I regretted soon after. Because the things that he said bugged me for an entire morning, it annoyed me and it mocked me. I didn't like it one bit. And I would have preferred to have heard nothing in the first place, so I could continue to be in the small little world of mine. Ignorant but blissful. But I can't, and so it sucked. 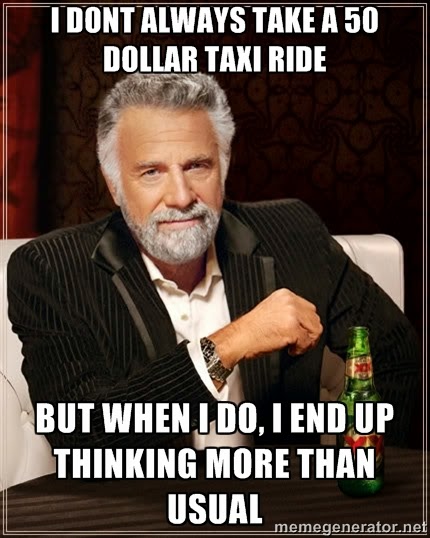 He started by casually mentioning how Fridays and Saturdays are his busy days, because of all the clubbing people around. He shared how just yesterday night a drunken girl boarded his taxi and asked him to spend the night with him because she was lonely. She was rich, he said, living in a landed property near West Coast, and he felt pity for her.

He talked about how his job, being a black cab driver, allows him to see different rich people, and he mentioned how once there was a guy who asked him to help send his Ferrari home. The young man had been drinking too much in Clarke Quay and was unable to drive home, so in the end he called a cab to get home. After reaching home he gave this driver 300 dollars to drive his Ferrari home from Clarke Quay, which the driver happily obliged, as it would be his first experience in a Ferrari.

He goes on by saying that rich people indeed have colourful lives, and proceeded to share about how most of his customers were involved in cheating on their wives one way or another. It was this part that struck me the most out of the entire conversation.

In his line of work, there has been numerous times when he was made an accomplice in an affair. Drunk clients who was busy making out in the back of his cab asked him to answer calls from the wife, and pretending to be company driver, saying that the husband reached home late because he has a function at work. There was once when he was driving a banker to fetch his wife at the airport, only that prior to reaching the airport, the banker and his colleague was busy fondling at the back. It was at the airport when the female colleague changed seat to the front while waiting for the wife, and when the wife boarded the taxi, the wife even called the female colleague by name. The husband then proceeded to make up some story about how they had been working in the office before this.

There were several other relationship cheating stories that he told, and all the time I was sitting in the back thinking about how funny life could be. It was like watching a drama, listening to all his stories. I could not help but wonder, why these guys, all high flyers in their own way, would still want to cheat on their wife so much? Are all high flyers and big earners destined to end up with an affair because of their power and prestige? Is this a in built part of society?

I don't know. I guess it's how we humans adapt to things. When we don't have someone, we yearn with all our hearts for just one person to come along and accept us. But when someone does come along, we will grow to adapt to the love the person is giving, and in the long run, we start to take things for granted. Because we have gotten used to having something until we forgot what it was like to not have it. So we seek something more to thrill us, to satisfy our growing wants, and that is how we end up in an affair. Because we're not satisfied. We have grown accustomed.

But does that make that right? Certainly not! Growing accustomed to something doesn't mean you can take things for granted. If anything, the love given by your partners is still the same, only that the effect of it may have diminished over time because we are used to it, hence we do not see. It is a curse inflicted upon us human that causes us to constantly seek new stimulation. It causes us to overlook the blessings we already had. Science has a name for it, and its called hedonistic adaptation.

To not fall into the trap of taking things for granted, and to not end up losing everything, we need to remind ourselves everyday of what we have. For example, telling ourselves that there is a wonderful person out there who supports us through thick and thin, even before we succeeded and til now she is still around. We need to remind ourselves that it was her who helped us succeeded and it was her who supported us during our failings. Or else we will grow complacent, choosing to focus on what we don't have yet, instead of what we already have.

And of course, I cannot help but to feel sad about my life to. I guess a part of the feelings were jealousy at how people can do all these and still be happy, and I'm still stuck in my life. I guess while our material belongings may be vastly different, perhaps our feelings won't be as much, because of hedonistic adaptation. Sill, it is hard not to be affected when you truly compare