Thanks to Walt Disney Studios, I had the privilege of watching Lone Survivor during one of the premieres two days ago and I must admit, it has been an interesting experience. It's one of the rare movies where you already know the ending thanks to the title of the movie and the real story it was based on (shouldn't have Googled about it), so it was really hard to not expect anything at the end of the movie. Or rather not know what to expect at all. 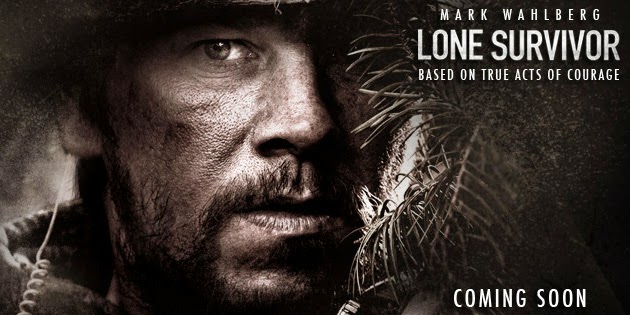 To give a brief overview, the story talks about the trues story of Operation Red Wings, a military operation initiated back in 2005 in Afghanistan by the US Navy Seals against the Taliban. Four soldiers find themselves facing against a horde of Taliban soldiers and have to learn to rely on each other in the fight for their lives. Like I said, the title kinda gives the ending away at the end.

While the movie itself boasts of impressive acting by all the four leads, and authenticity of the action and brutality of war, I felt like I was watching an Americanized version of the events, if not a realistic documentary, rather than a well thought out film for entertainment. I did not really like how the entire movie portrayed the Americans as the undeniably good guys and the Afghans as the irrefutable bad guys, and attempt to make us hate them at the same time, particularly the teenage Afghan goatherd. The soldiers deaths are dramatized to make it sad, while the Afghan's death, even the villagers, are trivialized.

The film did try to neutralized the entire Afghan is bad message near the end, but I felt it was a little too late and a little underpolished, with much lesser development given to the Afghan characters as compared to the American soldiers. The Afghan characters are portrayed in a single light with a simple purpose, whereas it was soldiers with family, life stories and deep connections for the Americans. Very unbalanced, and I didn't really liked it, because it seemed to suggest that Afghans, even Talibans, were less human than the American soldiers.

Nevertheless, if you choose not to think about the deeper complexities of war (because the fact that the film was based on a real event makes me think about it slightly more),Lone Survivor is a pretty entertaining movie. It has a beautiful buildup of the main characters in the first half of the film, as it focuses on their everyday normality to highlight the life that they have before starting on the action itself.

It's a pretty relatable movie too if you happen to be in the army before, especially for Singaporean males, as it highlights the kind of brotherhood that only happens in organization as elite as this. I could hear guys who were watching the movie exclaimed in recognition of the kind of operation jargon that the movie gave, and I was sure that they understood what the film was trying to portray.

All in all the film doesn't attempt to mask any of the elements of war, and presents a film that heavily focuses on the human spirit of the four soldiers. The acting put up by the four leads are superb, as well as the feelings the film tries to evoke. I would say that the film would have done better if it gives the same amount of depth to the Afghan characters as what it gave to the American soldiers, but at the end of the day, if you're someone who loves watching the emotional depth that goes into an elite organization like the Navy Seals without the Rambo complex, Lone Survivor would be the movie for you. I would give it a 6/10.