Beyond The Skies - Chapter 1 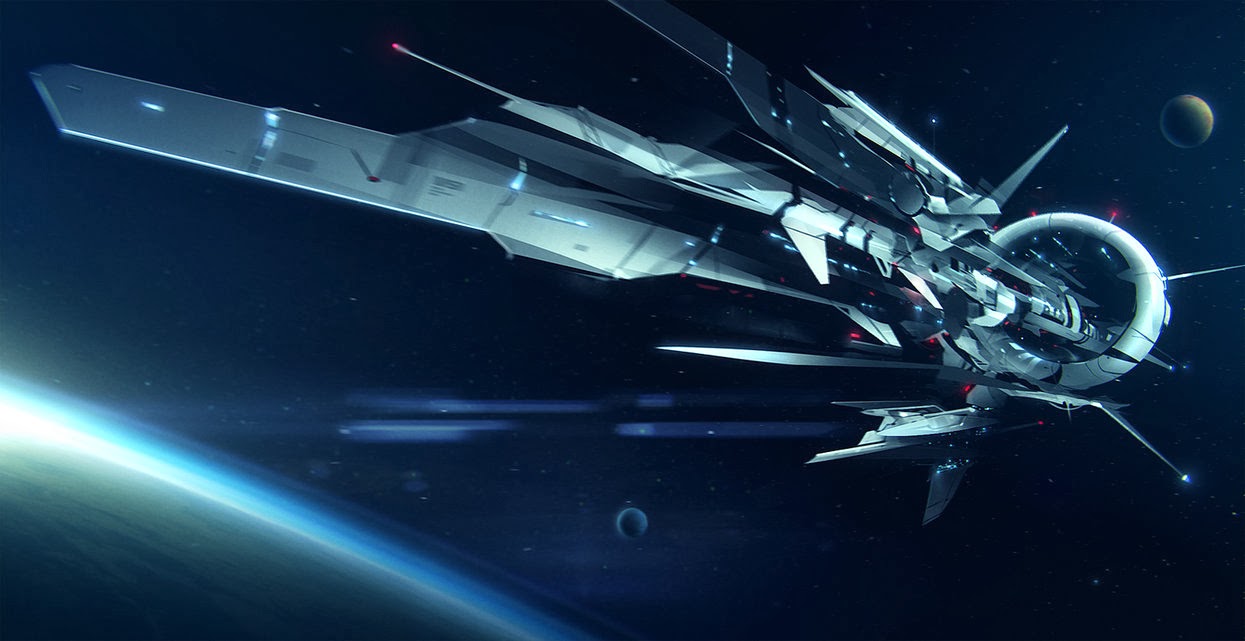 "Five minutes to drop zone!" the voice reverberated along the walls of the ship, awakening Matthew from his nap. He had dozed off, despite the flurry of activity around him, dreaming the same dream again. The day when his Ah Kong left. Yet another dream of his grandfather, a figure whom he had not seen in more than a decade. It was his first mission today, and he wondered if it had anything to do with it. The Eppes had launched a major attack against UAA's colonists on the planet, and the military arm of UAA was brought in to quell the situation. Apparently some of the actions of the colonists had disrespected the Eppe's culture, and they were retaliating.

The hushed whispers that Matthew heard from the mess hall speculated that it was part of UAA's plan to cement their influence, but he could not care less. The governments of Earth can play politics for all they want. He was there to kill some hairy looking aliens and earn his pay, and diplomatic issues was none of his concern. It was the credits inside his Personal ID Device (PID) that mattered. And he was able to finally see some real action.

"Three minutes to drop off!" came the same voice that had woken Matthew up just now. He angled his head to spot his platoon leader just several feet away. A middle-aged looking man with bushy eyebrows, and an equivalently bushy beard, known to the rest of his platoon as Lieutenant Koh. Several fine line of wrinkles stood out beneath his eyebrows and beard betraying his age. A reddish long scar, ran from his temple to his chin,  rumoured to have been inflicted during human's first interstellar war. He was now strapping himself into his drop pod, preparing for the descent into the planet's atmosphere.

Matthew began to do the same as the glass lid began to close down on him. He looked around to ensure that everything was in place, as a holographic timer appeared on his lid, indicating the time left before drop off. He and the rest of his platoon will be blasted off the ship in these drop pods, into the greenish planet below them. They were like the paratroopers of the old, with the exception that they are dropped from space itself.

"Apes," Matthew remembered one of his squad mates saying during the mission briefing. "They look like apes." He remembered looking at photos of their species back on Earth, when UAA first made contact with them. They do look the ones he used to see in zoos and documentaries, all hairy and bigger sized than the humans. The only exception was that the apes that they were going to face knew how to use guns and jets. They also have "big ass" anti-aircraft guns, according to Liutenant Koh, which made direct assault impossible. It was too risky an assault by the gargantuan ships of UAA's fleet, which was why the smaller drop pods would be sent in first. They would make smaller targets for the guns, and their objective was to disable the central power grid to the southern region before the fleet could be brought in.

Matthew's platoon will be the forward force to bring UAA's mighty strength against the Eppes, the stick against the Eppe's. It was hoped that it would bring the Eppe's home planet securely into UAA's influence. At least that was what was said during the briefing.

"One minute!" came the voice of Liutenant Koh through the earpiece.

Matthew did a final scan of his equipment, just to help quell the adrenaline that was coursing through his veins. Aside from the good pay, he was personally excited to part of the UAA's 6th Batallion as well. After all, military career was all he could do after he was kicked out of school.

When the first opportunity came through a recruitment advertisement, he was the first to sign up. The training was grueling, it took two years of his life, but it was better than trying to live off the streets. All menial labour was mechanized, and without the necessary skills, there was practically nothing Matthew could do to survive.

"Just leave earth," a friend casually remarked to him when Matthew shared his predicament, and Matthew did exactly just that. He did not want to be a colonist, because he could never understand their purpose. Somehow he had the feeling that they were more of pawns that the pioneers the media portrayed them to be. Only that could explain why almost everything, from food to accommodation were given free to the colonists. Whereas it would take a lot of qualifications and to be able to find a job on earth or any of the space stations, almost anyone ccan sign up to be a colonist. Which was why the poor and uneducated did so in droves.

Matthew preferred something much simpler, something that would give him more security than a black and white agreement with the government. A rifle for example.

His piece of security was fastened to the side of the pod, while his standard issue bag was held securely on his back. It containing all the gears necessary for the mission. Its black metallic cover gleaned under the dull green light in the pod. He ran a mental check on the materials inside of his bag. Food and water rations, enough ammunition for him to kill and entire village, as well as explosive devices with enough power to bring down even the tallest building. It also contained a communication device, shaped in a small rectangular shape, that would help him find his goal once he touched down.

The timer on his lid changed from green to red, and a computerized voice began to read out the final ten seconds to descent. He would jump in his pod if he could, just to ease the anxiety. But he resorted to counting down together with the emotionless voice instead.

Matthew flexed his muscles underneath his suit in anticipation.

He was told that the force from the pod's release will completely disorient your body for the first few seconds, and no amount of simulation can ever prepare you for it.

There were hissing sounds coming from all around him right now, sounds of air being released by vents.

And there was a loud bang, as the pod was shot from the side of the ship. The velocity from it caught Matthew's body completely off guard, as he felt his organs orushing to his head. Matthew's eyes closed shut instinctively as various forces acted against his body, each pulling at him in their own way. The manuals were right, no amount of simulation can ever prepare your body for this.

He knew that it would it only take seconds for his pod to be out, but it seemed like forever in there. The sounds of other pods being fired, the distinctive sound of mechanical grips being released and gushes of air reached his ear. Before long he began to hear another sound that he had not expected. He opened his eyes, and saw hundreds of pods streaming across the blackened sky. There were bright flashes all around them, fire expanding in the sky, before disappearing into a black cloud of smoke. It was not before long he realized the scary truth. They were being fired upon.

Beyond The Skies - Chapter 2
Home Page

Labels: Beyond The Skies Writing Escapades