The Girl on the Bus 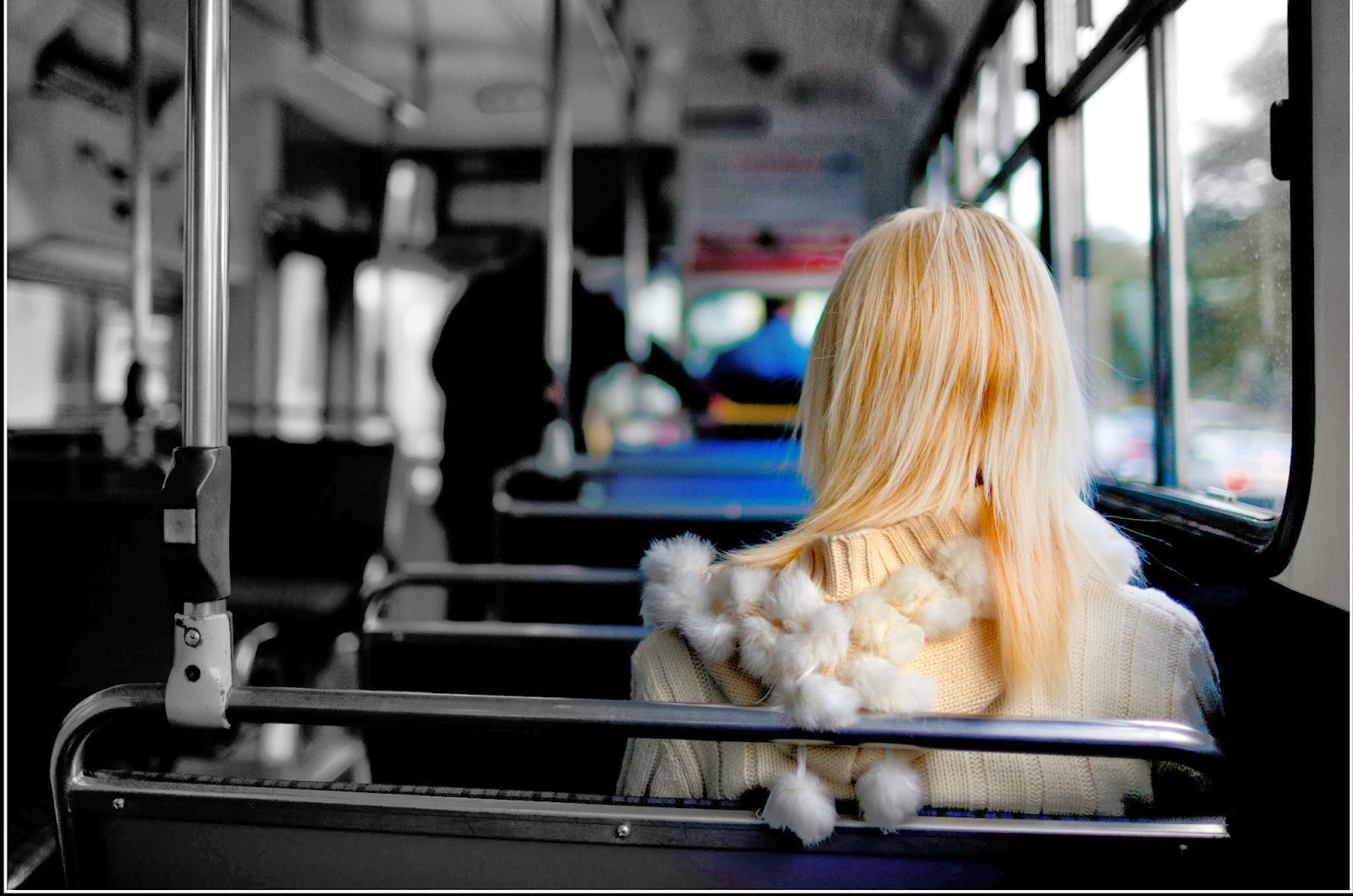 She wore her favorite black dress today. Her brown leather handbag hung by her arms. Her hair, highlighted in brown, swayed slightly as she turned her head to look for a seat. A small amount of blusher coloured her cheeks pink. When she finally spotted a seat, she gave a slight smile, and two dimples appeared on her pink cheeks to greet the otherwise dull morning. She looked lovely, as always.

It has been three months since he started his new job, fresh out from college. Looking for a job has not been easy, and eventually he settled for a job that is a two hour bus ride from his home. No company would ever want to hire someone without honours, after all. He dreaded the bus ride on the first day, quietly unhappy over his fate. He wondered how long he could survive before quitting his job. He made plans to quit. But something changed his mind on the first day itself. The appearance of this girl. The girl on the bus.

From that day onwards, he made sure to wake up precisely at 7am everyday to catch the 7.40am bus that passes through the front of his house. He knew that she would always board the bus at the stop after his, and seeing her every morning had become his ritual, the first thing that he looked forward to every morning. As he brushed his teeth and ate his breakfast, he would always think about her. What she would wear today, what she liked, how they would enjoy seeing the sunset together. He knew that these thoughts would never turn into reality, and he only playfully toyed with them, smiling dumbly to himself every morning as he chew into his cereal every morning. Sometimes it would be bacon and egg, if he was feeling up to it, but still she was in his mind. Every weekday morning for the past three months.

As time passed, he began to learn more about her. Her office wear with her high heels told him that she was working in an office. Her lanyard indicated that her office was in a bank. She enjoys reading, mostly romantic fiction. Other times she would be listening to music or sending messages through her phone. There was a black dress that she loved to wear, particularly on Fridays, in which he guessed must be because she was going out later at night. She has three set of shoes, two of them high heels, one of them a flat that she only wore on Fridays.

Seeing her everyday, for some strange reason, brightened up his day. Even though she was just one of the many strangers on the bus, it was her that his eyes refused to leave. A few lucky times she would sit next to him, perhaps stand beside him, while other times she would be several people away, but still visible from his vision. Some days she would not be on the bus, and on those days things just seemed to be not as good as the normal days. Seeing her had become a ritual for him every morning. It gave him a reason to look forward to the next morning.

Is this love at first sight, he wondered. For all he knew, they were just strangers sharing a bus. He might not even exist in her world. The same thoughts bugged him every morning. On whether he should talk to her. Or whether he should just forget about her. Or maybe she would not be whom he had envisioned her to be. What if she was completely different from him, just like his ex, who cheated on him because he was not rich enough? The thought of it usually kept him at bay, although he did manage to convince himself to at least ask for her number on the last day of the second month. That day came and went, and here they still were, still strangers on the bus.

As she passed him, his eyes darted back to his phone, his fingers furiously swiping away, pretending to do something important when he was only swiping across his different screens. Still very much a coward, he thought to himself.

And then one day, she stopped appearing altogether. At first he thought it was just one of the days where she might have taken another bus, but soon the days grew into weeks and weeks into months. He even tried waiting at the bus stop where she usually got up at, walking the half an hour journey there, just to see if she was still around. She wasn't.  Just like that, the girl on the bus, as how he called her, was no longer a part of his life.

As how life usually turns out, he moved on. Sometimes another girl with a black dress and brown highlighted hair would suddenly jolt him up, only to disappoint him. Eventually life progressed, he changed job and was was no longer taking the two hour bus ride anymore. The girl on the bus remained as a small forgotten part of his life, a part that he forgot with the passage of time. And suddenly there she was again.

She was wearing a whole set of different clothes this time, a t-shirt over a long pair of jeans, with a brown backpack on her back. He recognized the way her hair swayed, the dimples on her cheek when she smiled to herself. She was out shopping alone, in a bookstore. He was there hunting for books together with his friends. Seeing her there suddenly brought back all the memories, of the feelings that once filled him every morning when he first opened his eyes in his first three months of work. The eagerness of seeing her. That little jump in his heart when she sat next to him in the bus. And all the possibilities that he had imagined.

"Hi," his mouth opened without him knowing it. He was standing behind her too. She turned and looked at him, with a slightly confused face. Part of him wanted to run away right then, thinking that he had just made the stupidest move ever in his life. It had been months since they last 'met', and he was not sure even if she noticed his existence in the first place, but then a look of recognition dawned on her face, as a smile began to form into a laugh.

"You're the guy from the bus!" she exclaimed. He felt that little jump in his heart again. She remembered him. And they chatted. They talked for one whole hour in the bookstore, catching up. She told him she was promoted to another branch of the company, and asked him if he was still on the bus everyday. He told her that he changed jobs too. They discussed about the books that they loved to read, she made a remark about how she noticed he loved science fiction books, and he teased her about her choice of romantic novels. They laughed. The customers at the bookstore looked at them strangely, which made them laugh even more. Instead of a little jump, his heart was doing somersaults now.

"We should so grab coffee after this," he casually suggested after all the laughter died down.

"Oh, I can't," she said, raising her hand to brush back her hair. Only then did he saw a ring on her finger.

"I am actually waiting for my fiancee."

Life is a funny thing. People come, people go. All of them leaves a mark in our lives, no matter how small the role they played. Even a girl on the bus. A lot of people may lament on the fact that he missed his chance while he was on the bus, but somehow he thought about it differently. He felt sad, but not in a way that made him hate life. A beautiful sadness, as Butters from South Park would say.

He was sad that things did not turn out as what he had expected, but it was not to say that his life was a lot worse off. She appeared during that brief moment in his life for a reason, and thinking back, it made his days much more bearable during the early period of a stressful transition in his life. She gave him something to look forward to everyday, and without her, he realized that life would indeed be much worse off. He was thankful, in a way, because of how she made his life better, even in the short period of time. Besides, life is too short to worry about the what-ifs in life. What has passed will never come back, and we would never know what the future has in store for us.

He smiled and congratulated her. She said thanks, and said that she should leave. But before she left, she took out a marker pen that was in her bag, and scribbled a number on his palm.

"Drop me a message sometime," she said, "I should tell you about the book I am writing right now." The smile that lightened up his days so long ago appeared again, before being taken away from him as she walked out.