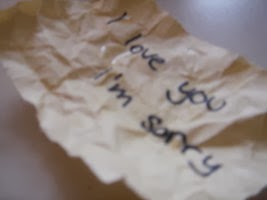 How long does it take for you to truly forget someone? Six months? Three years? Or never? You will never really know. Sometimes, even though you may thinkt that you have forgotten a person, a little reminder could bring all the memories and emotions flooding back to you.

He was busy emptying his cupboard when he saw that note. Like other papers that he stuffed in the cupboard, it came floating gently out from the shelves as he was busy moving the boxes out. Moving out of a place was always tedious, and for the past week, he had either thrown or donated a lot of his belongings away, not wanting to bring them together across the sea. His new job required him to relocate to an entirely different country, and he wanted to bring as little things as possible.

The paper eventually landed on the floor. Giving a sigh of annoyance, he put the box that he was carrying down on the floor, and walked over to pick up the paper. He had wanted to throw it, but something about the paper made him stop. The handwriting reminded him of a time that seemed so long ago. A time when everything seemed so much simpler. A time that he had forgotten that it existed.


He sat down on the floor, the urgency to pack his stuff suddenly all gone. He picked up the note, and felt its texture under his skin. A slight scent of perfume still lingered over the note. He felt a slight tinge of nervousness as he began to read it.

"Dearest stupid boy," the first line of the note went, "thank you for always being there for me. It's hard to believe that it has been two years since we've been together, and I could not even begin to say how happy I have been to be able to call you my boyfriend. We have shared so much experiences together in this short time, and I am happy that…”

He did not have to continue to know who the message was from, and what the message was about. It was the letter that his first love had given to him on their second anniversary. A strange feeling began to form inside of him, as he peered over the familiar style of writing. The smileys that she used, and how she loves to draw the full stops in the shape of a heart.

He felt strangely nostalgic, and found himself suddenly revisiting memories from a time so long ago. A strange feeling began to develop in him, a feeling that he found it hard to describe. It had the familiar feeling of sadness, but it was not that of one wanting things to be back as they was. It was more like a feeling of missing something, that if given a chance, you would want to relive that time again.

He pulled over the box that he had put on the floor towards him. The dust from the flaps covered his hands as he opened it, and he wondered how long the box has stood forgotten inside his cupboard. Inside laid all the things that he had received from her over their three years together. He took out the first gift that laid on top of the pile. It was a photo album that she had made for a Valentine’s Day celebration, with photos that they took during trips and outings together.

In the first photo his arms were around her shoulders, with a while wall in their friend's house as the backdrop. She was holding a plate of food in her hands, while he was smiling sheepishly towards the camera. It was their first picture together, during one of their friend's house party. Their friend had encouraged them to take the picture together, cheering them on as their shyly ambled closer together.

He tried to remember the feeling that he had then. Happy, definitely, at how lucky he had been. She was the main character for their school’s drama production, him only a supporting character. All of the guys in the entire school lusted over her. After all, you do need a certain amount of beauty to be the main heroine in a 2000 student’s strong school. It was the last year of their A levels before they made it to university, and the play was like a passing ritual to all of the graduating students.

He remembered how he was totally mesmerized by the way she carried her lines, how elegant she seemed when she strutted across the stage and how her big brown eyes made him go soft and warm inside. Both of them were prefects and they had a lot of mutual friends, hence they always hung out together as part of a bigger group during lunch. Like any other guy at that age who was driven by hormones, their relationship started out with him teasing her. He would tease her on how other guys like her, and how she would look if she was together with the other guys. He would secretly be happy when she said that she has no interests in those guys, knowing that somehow he still had a chance. He would call her names, and would be excited too when she teased him back.

The teasing and lunch in a big group eventually gave way to heart to heart talk and lunch with only the two of them as they found more common topics to talk about. About their plans after A levels, their interests in music, and their dreams. Before he knew it, during a text message exchange one night, he confessed and popped the question. When she told him that she had the same feelings too, he could not sleep for the entire night, looking at the text that she sent over and over again. He smiled the whole way until school tomorrow morning, and he remembered how high his heart jumped when they held hands for the first time during lunch that afternoon.

He flipped to the second photo. Both of them were dressed formally. It was the final function that they both attended together in their school. The prom night for the outgoing seniors. Both of them were draped in sash that read 'Prom King' and 'Prom Queen'. All of their friends voted them for the award. It was one of the proudest moment in his life. Proud because he had such a great girl to show off to the world.

How innocent and naive those times have been, he thought to himself, and smiled. A smile that was amused by how quickly people, feelings and promises change over time.

Third photo. They were sitting on a trishaw, beaming happily. It was their first vacation trip together. He remembered how by now arguments have started to surface, and on that night itself right after the photo, they argued , which ended with him stomping off and her crying. What was it that they were arguing about again? He cannot remember. Funny how petty things become with the passage of time, and yet the argument seemed like the only thing that mattered back then.

He gave a sigh. If only he could travel back in time. How he would have changed things.

He took out his wallet and began rummaging over the numerous cards that was in it. He was sure that it was still tucked in somewhere in his wallet. As he flipped through the credit cards, discount cards and membership cards, he finally found what he was looking for. The last picture that they took together, laminated by her, hidden in his wallet when they were out to celebrate his birthday. He had forgotten that it had been there. When they broke up, he did not want to throw away the last piece of memory from the relationship, so he kept it in a secluded corner in his wallet and soon forgot about it as other things began to pile up in his wallet.

It was a photo overlooking a valley. Their last trip together before they broke up eventually. They had wanted to go on the trip to 'sort things out', to rekindle the feeling that was 'lost', to just destress. They had started university, both in different places, and it was not easy to maintain a long distance relationship. In the end, they went their separate ways. In the end, it did not work out. The relationship had became too hard to bear. He remember feeling tired, dejected and wanting to give up.

He took a look at the photo again. Both of them looked so happy in it, and he thought how deceiving a photo can be. Behind the smiles laid things so much more complicated. Arguments, disappointments, tiredness. But yet they looked so blissful together, at least in that moment, in that photo. It looked like they were meant to be together forever.

Perhaps this was how things are meant to be, he thought as he put the photo, the last keepsake of his first love, into the box of memorabilia from her.

Alas, she was the right person at the wrong timing. He was too playful, too immature and too impulsive during that time. He focused too much on the bad then, never allowing himself to really sit down and appreciate what truly mattered. He never really stopped to be grateful.

If there was one way to describe our lives, one good example would be to compare it with an empty sheet of paper. When you first arrive in the world, you are like the paper, all white with nothing to fill. But as you began to grow older, more people will begin pass by in your life. Just like brushes, each of them will leave their own stroke of paint in your life. And even when they are long gone, the stroke that they left behind will always remain on your paper, forever contributing to the entire painting itself, of what our life is made of.

Sometimes you may forget that someone has left a stroke on your paper before. That in the past, this person has painted your life. But along the way something will come along and remind you of how significant of the stroke left behind by this person. How your picture might have turned out looking entirely different if it is not for this person. In a way, he was thankful for the experience, the good memories that he had.

"Daddy!" came a voice from behind him.

In time he would learn that no two brushes will leave the same stroke and colour on your paper, each of them have their own unique style to add to the vibrancy of your life. As he puts the box of memorabilia in together with the other boxes of things from his life, he was thankful. Thankful that at least it happened.

But like other memories in your life, eventually you have to keep them back to where they belong, like shutting of a drawer every time after you opened it. Because after all, they are only memories that are supposed to be kept in a place in which you could occasionally take a look at them. She might have played a big part in his life once, adding her own stroke of paint to the picture of his life. But that time came and went, and what matters more right now are the brushes that are still making their mark in the picture. He put the box together with the other boxes, boxes of things that in their own way have shaped his life to be who he is today.

"Come on sweetie, lets go see what your mummy is doing."