In loving memory of...

The infection has spread quickly around the island, turning almost everyone into the walking dead. The last bastion of survivors were trapped near the center of the city, waiting for help, only to be told that the army can only help them if they could reach the sea, 5km away. Seeing how the horde is swelling around them, the survivors had no other choices. They had to run. All 5km to the army's designated point.

Four friends from NUS find themselves uncomfortably stuck in this dilemma. They had just made it safely to this safe zone, only to find that they had to go back out again. They had lost four other friends along the way, and they were not sure whether if they would survive if they were to go back out. Still, the survivors were aching to go, and at 9pm sharp that night they ran. They ran for their lives.

No, that was not a made up story. It's real to a certain degree, only that it's not the whole of Singapore that has been infected, rather it was just the area around the Padang. And it was not real zombies that chased us, but rather it was all part of a themed marathon event, called Run For Your Lives 2014.

Arriving for the first time in Asia, Run For Your Lives is a 5km themed marathon run, where you need to evade groups of zombies as you jog/run past the various iconic locations of Singapore.


Along with my three friends, Jason, Thi and Wilfred, we decided to try our luck at this event to see how we would survive just in case a zombie apocalypse does happen in Singapore. We had four other friends who were in the zombie team, already infected, to try out the different experience of the event. 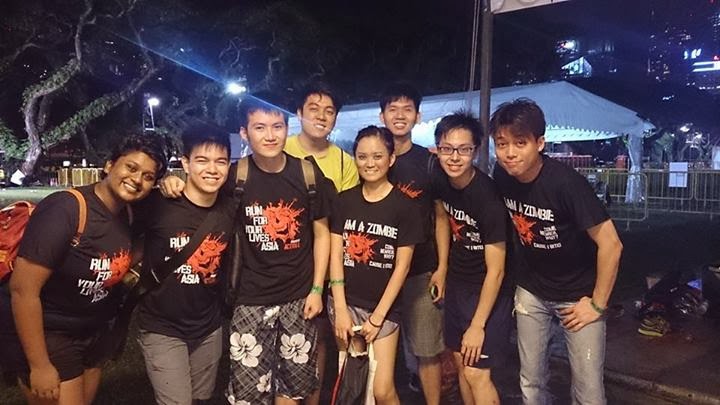 I find the event to be quite fun and enjoyable, it is not often that you get to have a chance to escape from zombies and we were lucky that our wave timing was at 9pm. The four of us had the opportunity to jog past iconic landscapes like the Padang, the Shoppes at Marina Bay Sands, the Helix Bridge, the Promenade and even the Merlion in the wonderful night scenery. That experience alone was already quite memorable.

Another reason why the whole experience was fun was because of the thrill itself. While the race did not involve the zombies chasing you all 5km of the way, they had certain marked out infected zones where the zombies linger and waited for your brains. The feeling of dread as you spot an infected zone far away, and the excitement as you run across them while hoping with all your might that your life tags stays intact is one of a kind.

The earlier rain also added a certain degree of challenge to the course itself, as green fields are suddenly turned into muddy areas. By the time we finished the race, we were mud filled from top to bottom. 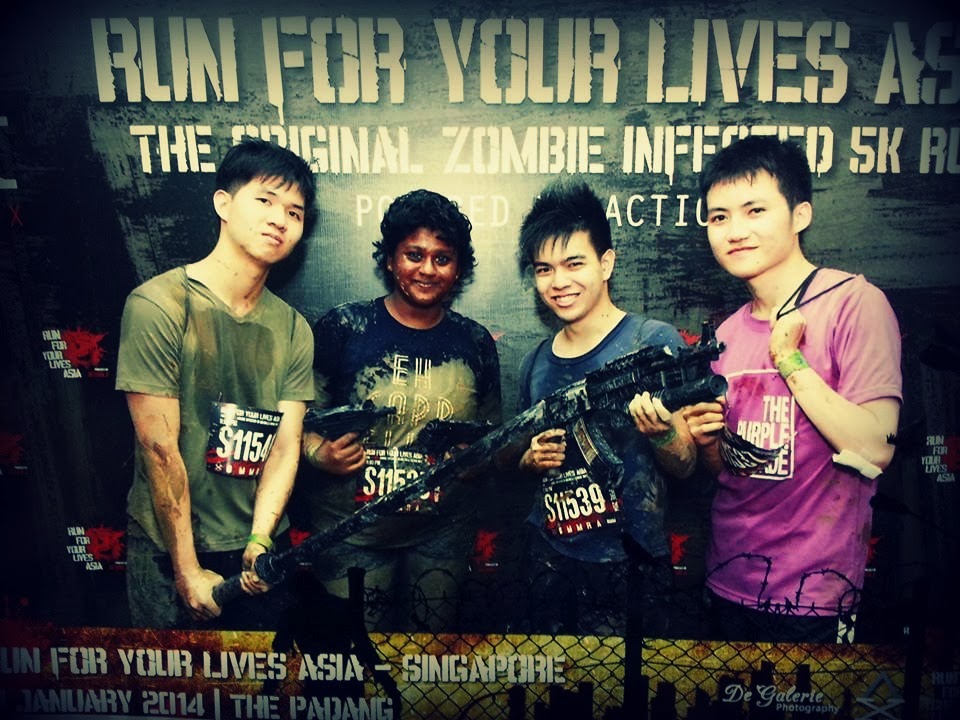 Sadly none of us survived the race due to tragic circumstances, with the zombies being overly enthusiastic in grabbing all our flags. Two of my friends lost their tags in the final obstacle, they were supposed to crawl under a net and a zombie just stood above them collecting their flags as they cross over (clearly violating the no more than 2 tags rule) while the other got betrayed by our friend-turned-zombie.

My story, on the other hand was sadder, as a bulky zombie (which reminded me of the boomer from L4D2), in his excitement to grab my flags, knocked me to the ground at around the 1 to 2 km mark, with me ending up being in the medical tent for quite some time. By the time I came back out the survivors had long left the place where I was, so I had ended up trudging through the mud fields alone and facing an entire zombie horde on myself (in which I gladly surrendered my tags to them).


It was not only me who was injured though, as I heard stories about dislocated ankles and back injuries as I sat in the medical tent. I was lucky enough to escape only with a scraped elbow and bruised thighs.

I would still join the event if they have it the next year though, as it was an experience like no other and since I did not really complete the entire race legitimately.

Other than that I also think that for such a large scale event like this it was already quite well organized, other than the caring medics they also had organized bag storage facilities, sufficient water points, shower facilities and even great music near the end of the event. They had the band Goodfellas and DJ Nicole Chen thumping out good music for the rest of the participants in the padang, which added to the atmosphere of the entire event.


It's definitely a must go event. Word of advice though, make sure you drink enough water for the event, or else you'll end up half sick like me the day after. Also sign up for the evening timing, which I think offers you the best scenic route possible (without all the sun) and would still be able to catch the good music at night.

Until next time, I have to now go nurse my infection.