A Walk With The Wolves 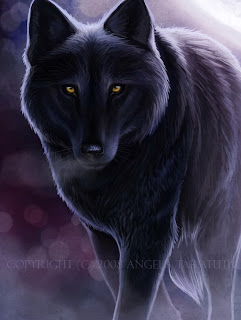 "You'll never be as successful as him," the black wolf whispered in a condescending manner, "so why do you still try so hard everyday?" Although my brain was urging me to ignore its voice, a part of me couldn't help but to agree to what it was saying. The black wolf does have a point.

Sensing that it was making a headway, the black wolf continued in that snarling tone of his, slowly pushing me towards the dark abyss from which it came from.

"You have been trying for so many years now, every single day you're devoting hours to your life for this, and yet what is the result that you get? You can't even buy an egg per day from what you are earning," it mocked.

I looked at the statistics again. True, the wolf does have a point. Even though I have been maintaining a steady pace in doing what I loved, things seemed to have hit a bottleneck. People talk and talk about doing the things you love, and it will automatically help you back, but it never seemed to be the case with me. The cabin of the train that I was in suddenly felt so much darker, so much lonelier.

As if to seal the deal, the dark wolf made another link appear on my phone's screen. It gave a slight grin when I clicked the link, perhaps happy that its words were having a field day with me.

The link brought me to an article talking about a movie that I have recently watched, titled The Secret Life of Walter Mitty. Along with others, I loved the show. I loved the message the movie brought across, that it is possible to chase one's dream. However, the article seemed to be saying that no, that was not the message the movie was putting forward. Instead, it showed how bleak Walter's life was at the end, he had no job and he needed one to continue surviving, which made him no different from who he was at the beginning.

The article went on to suggest that what Walter is experiencing wasn't true happiness, but instead a fleeting and illusionary one. At the end of the day, he still needed to survive from paycheck to paycheck while people like Sean O'Connell was still living out his dreams, despite Time's closure. You need to work hard, the article said, suggesting that a daily 9 to 5 job is the worst possible life one could get. The only life that is worth living is the one where you don't need to work to earn the paycheck, one that you can travel the world.

The speakers on the train announced the name of the station that I usually alighted at, but somehow I did not feel like leaving the train. I sat at one corner of the train, phone still in my arms, as the black wolf continued hovering around me. It seemed to have grown bigger in size now, its looks much more menacing, but yet no one in the train could feel its presence.

Passive income. A life filled with only travelling. It seemed that society have defined true happiness to be something consisting only this two features. It's an idea that is constantly propagated, that if you have a boss and if you're earning monthly income you should automatically be unhappy and not successful.

But can everyone achieve a life like this? Is it truly sustainable?

Sadly the answer is no. True equality is a myth, at least in our society right now. We might think that yes, life would be terribly happy if we are able to be constantly travelling and doing the things we love without a care of money, but like it or not, it is only a luxury that few can afford. To do that, you need to be extremely good at what you're doing, and that what you must have is a metaphorical goose that lays golden eggs.

Not only that, someone's success often comes at another individual's expense. Who is going to grow all the food, keep the facilities running, building new things, searching for new knowledge when everyone is doing the same thing? Like it or not, at the end of the day, we need people to clear our toilets, dispose of our trash and do all the hard work for us.

The speakers at the train were announcing that it was the last stop now, at a station that I was not familiar with. I decided to go for a walk, the black wolf slowly following behind me.

Am I happy? I decided to ask myself.

No, by a far chance, no. I have debts on my back, my attention on doing what I liked is splintered at best and I lacked motivation big time. What is all this hoo-haa about hard work anyway? That to succeed in life, the only constant thing that you need is hard work? Are laid back people like me doomed to a life on obscurity forever?

"Why are you letting others define happiness for you anyway?" The silence of the night was broken with the sudden appearance of another voice. I spot a white wolf walking beside me now, much smaller in size than the black one, but looking just as majestic. The black wolf snarled in response to its appearance, but did not seem to do anything other than that.

I took a look at the white wolf, and things suddenly began to look much more different. I thought back to my work, and to my life in general. True, the work that I was doing was in fact not getting as much recognition as my competitor. Day in and day out I would see people flocking to him, admiring his work, thinking of how unfair the world is as I sincerely did not find his quality of work enjoyable. Although I do have people who occasionally complimented my work, I was resentful. I wanted more. I wanted what my competitor had. But that in a way would entirely shift my focus away, as I would end up pursuing goals that were not mine in the first place.

"I thought you always loved writing," the white wolf commented, "so why are you so bothered about the statistics and page counts? As long as you enjoy the process, and as long as a person who is reading it loves it, why are you so unhappy?"

I thought back to the first question that the white wolf asked. True. Very true indeed.

In my fervor to compare, I have let others defined what happiness should be for me. Because every single person out there looks at your statistics, your money, your prestige and your working hours; their value of measurement suddenly becomes yours, and before long you are basing your happiness against their measurement.

The same goes for work too. Who said that 9 to 5 jobs are guaranteed to be boring, and who said that travelling on a backpack are automatically considered as happy? Who told you that earning paycheck to paycheck is definitely pathetic, and that you should be working towards the ideal that society set for you, or in the case of my night, what The Secret Life of Walter Mitty set for me? In the end, my life is mine and it is not up to anyone to tell me whether I should be happy or not. And in a moment of epiphany, I realized that happiness, at the end of the day, is subjective.

At the end of the day, what make us happy is entirely up to ourselves. Be it your parents who prepare a sumptuous breakfast for you every day, your friends who are always there for you or even the neighbourhood delicious food that is just right next to your door, happiness and meanings are defined by ourselves. As I looked into my life, and remember how the children at my center would always hug me after a day of class, how I have friends to do dumb stuff with (like getting chased by zombies), I realize that my life is not as unhappy as how I would think it would be. It is all about perspective. We are all different people, with different wants and aspirations, so why are we striving towards a common definition of happiness?

We cannot let others decide for us whether we're happy or not. To those who tell you that you need a certain set of criteria to be happy, you can look them straight in the face and tell them to jump off a building. Because I believe that ultimately, no one could be 100% happy, 24 hours a day, 7 days a week. Even those who are mentally ill have their down days. Even you may be travelling the world or having loads of money credited into your account everyday, I would still believe that not all of your days are happy. Feeling down and sad is part of human life, and to deny that is stupid.

At the end of the day, happy or not, it's up to you to decide.

Sensing that I may have learned my lesson, the two wolves left me for the night. Noticing the crowd of people that were around me - families holding their children's hands, friends laughing together as they enjoy the night scenery - I realized that the night was not as dark as I initially thought after all.