The Year the Internet Broke Us

A piece titled 'The Year We Broke The Internet' written two days before Christmas on the Esquire website carried an interesting message. Penned by someone who shared the same name as me, the article lamented about the loss of journalism credibility on the internet, citing how the internet media sites are driven by shares, not authenticity, as 2013 has seen one of the most shared hoaxes year.

The author, Luke O'Neil (who doesn't call himself handsome), took a shot at websites that you would commonly shared on Facebook: Buzzfeed, Viral Nova, UpWorthy and the likes, saying how websites tend to share first without first checking the credibility of the news. In the end what we ended up with are a whole bunch of fake news that flooded our newsfeed (you can read about the examples on the original post) and he cautioned against this trend, which he is afraid will cause some irreplaceable damage in the future. Like the Russians unleashing nuclear missiles as a result of reading an article from The Onion, claiming that US will go for an all out fight.

Okay that sounded far fetched, but looking at how people tend to respond to interesting articles, one that fits in to our stereotypes or one that is enough to provoke us, O'Neil does have a point. However, far from offering any solutions or ideas, his explanation, apology and plea ended with a simple one liner message asking us to not trust the online media. But how are we going to do so if the internet continues to bombard us with pieces that O'Neil claims to oppose? I have no idea.


So to fall back on the tactics used by so many websites out there, this blog post is essentially talking about one issue, which is:

1. The tendency of people to share things without thinking much (and also with that the fall of credibility of news reporting on the internet)

Which I think can be essentially summarized into one feature of our brain, which is:

1. The tendency for our brain to save energy when it comes to processing stuff

To be honest, I think the debate can continue to rage on and on about how the internet system works. We can continue to whine and complain about how the internet is screwing the way we consume information and even altering the way that we think but without the solid groundwork to address these issues, it is going to stay there. I don't know if you noticed it, but the internet works in a way that is akin to a vicious cycle. It is powered by likes and shares. Companies would want to post articles that are more likely to be shared by consumers and the consumers themselves would want to share the articles on their own newsfeed to garner their own likes and shares, and that in turn reinforces the companies to produce more of those type of articles.

There's no consequences when it comes to sharing these type of stuff, so trying to hit at the companies or merely whine to the consumers ain't going to change anything. Because the same type of thinking process is still there, affecting how we consume and share articles on the web. 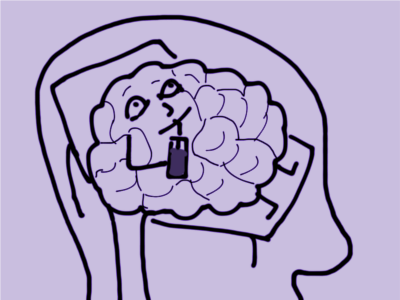 You see, it has been long established in the field of social psychology that when it comes to thinking, our brains are just plain lazy. That's how fallacies, bias and stereotypes occur. To save energy, our brain relies on already proven techniques and shortcuts (called heuristics) when it comes to processing information. Just to explain a little bit more, heuristics is basically a general rule that our brain adopts to help us make quick decisions, based on past experiences, and although it saves time in thinking, it is also prone to error. For example when dealing with cats, if someone tells you that all cats are lazy, and if you adopt the thinking, you would then come to interpret all cats are lazy. Even your neighbour's cat, your sister's cat, all of them are lazy. It saves energy for your brain as it only needs to store one piece of information about cats, and you don't need to process the details of a new cat every time you see one. Just recall the information that all cats are lazy and voila, your brain can move on to other tasks.

Relying on heuristics is a classic example of how racism and sexism can occur, because we tend to lump everything into categories and introducing a new category introduces unwanted stress in our brain (what cats can be hardworking too, ok wait, let me create a new file for hardworking cats... what do you mean there's half half now?!). Which is why some people are so unwilling to buckle in the light of new information, or why people tend not to go the extra mile when it comes to information processing, because the less steps involved, the better. Which brings us back to the main argument raised by O'Neil of how the internet works:

1. The tendency of people to share things without thinking much (and also with that the fall of credibility of news reporting on the internet)

This is really a no brainer. I remember reading somewhere before that humans tend to perceive all information coming in as true, unless skepticism and critical thinking is introduced. Because it is easier to take in everything as 1 (True) rather than having to go through the flowchart of Verifying Whether this piece of information is true, because it involves processes like if A then B, if B then C and etc. It takes time, and our brain doesn't really tolerate that. And both the writers and consumers are guilty of the habit. And demanding for change in the system wouldn't really work, because to be honest, it's a self reinforcing vicious cycle.

Unless people are made aware of the potential pitfalls of sharing fake news (which O'Neil tried to highlight) and told how to counter it, we still still continue the trend, despite how many numerous articles that are written about it.

The reasoning is simple. We don't paint, produce music or play sports everyday in our lives but yet these classes form an integral part of our curriculum and yet something that we do everyday, every hour (sometimes the first thing that we do when we wake up) is not spoken of in education. Youths are often left to fend for themselves, to discovers the dos and do-nots, often with devastating consequences. Some are denied their jobs; while some are flamed by netizens, never to recover (like the recent case of the blogger who asked for free haircut or the incident where a student tweeted the picture of an exam paper). One cannot blame them directly though, because there's no class on how you should conduct yourself on the internet, and often we have to learn through trials and errors.

Also, a class on the the social media can cover so many things. From etiquette, image management to even critical thinking (don't believe everything that you see!), all of these skills are needed to navigate the ever confusing labyrinth of what we call the internet. Of course, this is merely a wild idea I am throwing off. But to see criticisms after criticisms thrown at how the internet works, perhaps it is time we learn how to use it to advance the knowledge of society, not to dumb down it any longer.

The internet has changed how society operates from the biggest to the smallest level possible, and perhaps its time the society educate our younger generation on how they should handle the internet, instead of letting the internet handle them. They call it the web for a reason.