Being in the friendzone, especially for a guy, has been viewed in very negative terms in the past few years. I don't know how the term came about (because I'm lazy to google it), but from as far as I know, the friendzone has been treated with much negativity by almost everyone. Tell someone that you are in a friendzone and they will automatically sympathize with you. In fact, some are so morbidly afraid of the friendzone that they rather be a jerk than a nice guy. Even for me, I used to be so afraid of this 'friendzone' term that I refused to be nice to any girls. Don't want to enter into friendzone, I would say.

However as time passed, I could not help but wonder, is friendzone that bad to begin with? Are you forever doomed to a life of singlehood if you enter the friendzone? Could it be that we have seemed to demonize the friendzone that much until we forgot that it's totally okay to have a platonic friendship with someone with the opposite sex? 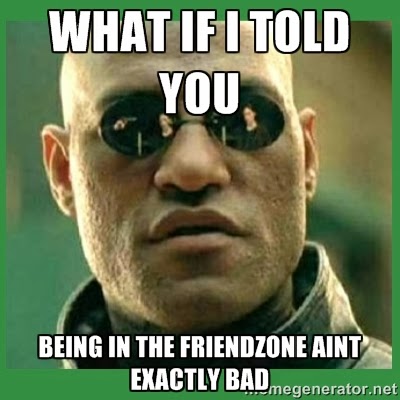 To be honest, I don't know. I think it has to do with how things have changed a lot in our society in the expectations that we might have from a relationship. I think the number one reason of why we are so afraid of the friendzone is that we have this perception that whenever we are doing contributing something to a girl, we would naturally expect something in return. For example if I give my time for you to go out for a movie, or if I treat you to a movie, I would expect something back. And often when it comes to guys expecting something, it mostly has to do with getting laid. Sure, most of the time it might be worded as wanting the girl to be his girlfriend, but underneath of it is a totally different thing.

Gone are the days where dating simply meant dating. Where a date is supposed to be an avenue to get to know each other better before deciding where to progress. Now it's more like if it's a date, it's automatically assumed that you both are together. Gone are the days where you can simply be nice for the sake of being nice, because you appreciate the relationship that you might have with the girl. Nowadays, there seem to be a tendency to label anyone who is being nice to a girl and not getting anything in return as being in the friendzone. 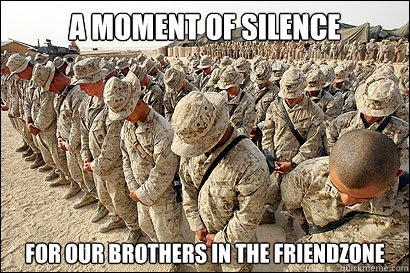 I don't know. Perhaps I have a different definition of relationship altogether, but somehow, I feel that being in the friendzone ain't as bad as how people might portray it to be. Like in the movie Frozen, it takes a lot of time and experiences to finally find the one who is perfect for you, and the process that you go through in the friendzone is part of it. I mean if the girl is really meant for you, she would want to be together with you right? If you are truly important to the girl, she would not simply lump you together with tons of other guys right? And if she is someone like that, perhaps you might want to reconsider your feelings towards the girl.

To be honest, I think that being in a friendzone is not such a bad thing after all. I am a guy who personally clicks better with girls, and sure, you might not get laid, but who said sex must be the main thing that you would want from a relationship? The companionship, the ability to bitch about life, and to do crazy stuff together, those count more to me than merely physical exchanges. This could be a situation unique to me as I have trouble finding a trusted male friend in Singapore and because I am a more emotional guy, an attribute that guys do not like to display or talk about, and thus why sometimes I find it easier to talk to girls. Which might explain why I am sort of in multiple friendzones.

But I'm not complaining, because I can watch my favorite movies, eat dinner, explore new experiences, and bitch about life with them from time. Besides, I work well mostly in a dyadic relationship than in a group.

In fact, I think that even if you do have feelings with that particular person, the friendzone can be particularly beautiful phase. It is the phase where you try out new things, learn more about each other, go through ups and lows, and ultimately decide if he/she is the person that you want to spend your life with. Because all the couples that last are those who are best friends too, those who share similar interests, passion and everything. The friendzone itself, I believe, is an overrated excuse that people use to bitch about life when there is nothing wrong in the first place.

Of course I am not saying that you should not pop the question forever. You could drop hints here and there, and see how the other person takes it. If he/she is truly the one, she would reciprocate. Don't push it too fast though, but just take time to enjoy the period where you get to know each other better, and simply to be friends without having the emotional entanglement of an official relationship. Friendzone is the period where you find out bad habits about each other, and decide whether you can accept it or not, rather than finding it out after you have been together. And then you would have to force yourself to accept the bad habits, and more often than not it would lead to an ugly direction. Because I believe that if that person is the right one, if that person is THE ONE, ultimately you will be together. Of course this is an extremely idealistic situation that happens more often in movie, but that's not to say you can never try right?

But then again, I could be wrong. This is a late night rant after all, fueled by a lack of sleep.