The internet took me to a rather dark place in Singapore’s online world today. It was during a normal after work commute when I saw a link appear on my newsfeed with one pretty kinky name. I don’t think it’s appropriate for me to share the name of the website here, but it consisted of words describing Japanese warriors and promiscuous woman. I felt a small boy’s curiosity bubbling inside me, like the feeling that I once had when I first encountered a porn website back when I was still young. It was the same time as when I was learning about calculus, if I am not mistaken. Unable to contain that mischievous feeling, I clicked the link, eager to find out which unknown place it would take me to. It was like boarding a bus to a secluded area in town that you have never heard or seen before, but had a vague idea that it sort of existed from rumours, gossips and chatter around you.

Eventually, the window changed from the familiar white and blue motif to one with a load of scantily clad girls pictures, comic sans font and flashing gifs. The website’s banner described itself as the prime sexual related forum for men in Malaysia and Singapore, and advertisements for call girls and sexual encounters lined the side of the page.  It’s pretty much like  Geylang in Singapore, a place where everyone knew but seldom talk about it. It reminded me of the time when I accidentally wandered into the Orchard Towers area with a friend one drizzling night, as we were trying to hunt for a cab waiting area after a late night movie. There were women everywhere, standing by the pavement in their dresses, waiting for something to happen. And they were men, often with a booze bottle in hand. I had heard of the Orchard Towers before, or rather read about it before, but I had no idea how it looked like or felt like in real life. I can’t help but to feel intrigued as I walked past men with two sexily dressed women in both his arms, waiting for a cab. I could only guess where they were going next.

Clicking link after link on the website, I felt the same feeling that I had experienced back at Orchard Towers. The general “Oh so this is how everything looks like” type of feeling. The website has the usual type of content that you would expect from a sex related forum. Stories about sex, people sharing pornography, and what nots. However, One of the parts that caught my eye had the heading “escort services” in Singapore, and feeling ever more curious (with a little tinge of naughty, that I'll admit), I followed that trail. I had heard of 'escort services' in SG before, but was never bothered to find out. A part of my brain had the inkling that prostitution was real in SG, but never has the full effect dawn on me.

However, as I delved deeper into it, I have a feeling that indeed this scene is alive, well and kicking. With words such as "massage services offered" with tons of acronyms to go with it (which I have no idea what it is about) like BBBJ, FJ, COB, COF, GFE and the list goes on. Just a quick google on "escort services Singapore" or "sex escorts Singapore" and you have all the results. Just to use an example I found here: 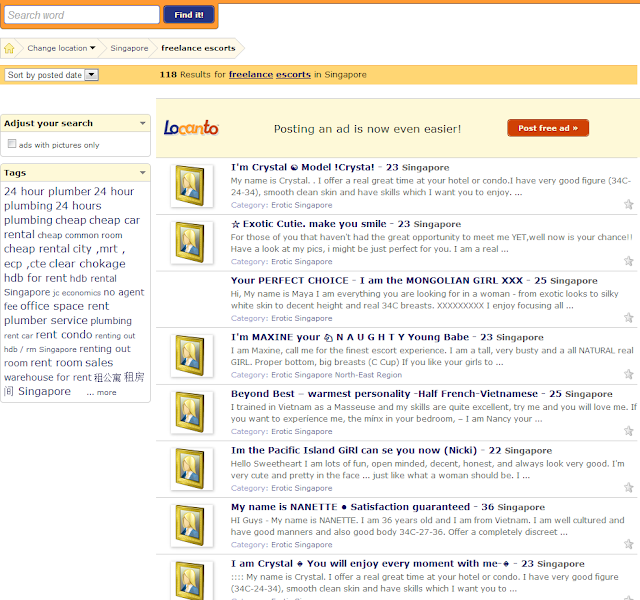 Or if you're someone who is more visual... 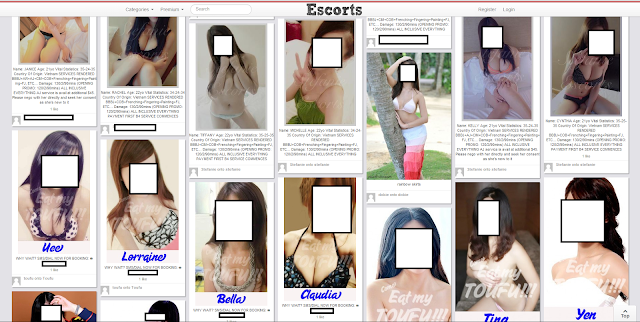 From 100 dollars to a few thousand per hour, you literally can have these girls on their knees for you. And it's not just like a few of them though, with the numerous agencies out there, there's easily hundred over girls out there, if not thousand. Some of them are foreigners, some of them not. It's a dark corner indeed, that I could say. Part of my mind wanted to try it out myself to see how is it like (that I would shamefully admit), but eventually I closed the browser (and erased all history, of course).

Somehow, I felt that it was wrong. A part of me wondered what goes behind the story of the hundreds of girls in these websites, how many of them were forced into it versus how many were doing it willingly. A part of me wanted to judge them, to call them sluts, but my mind brought up the story of how prostitution remains one of the biggest source of human trafficking in the world, and shuddered at that possibility. And even if they were doing it willingly, can we blame them? The demand is there, in fact the demand is huge, and the pay is good. I mean for 500 dollars per hour, who wouldn't want to do that kind of job? Somehow we have created the system to allow these services to flourish.

I thought about the men who patronized these services. What about their stories? I recalled the news about how different men were charged in court because they patronized an underage prostitute. Did they solicited her service from websites like this too? Where the girl sells off her body measurements and the services she is willing to do in exchange of cash? Do these men have a girlfriend of their own? Perhaps wife or children?

And last but not least, I was reminded of the public uproar in regards to the entry of the website Ashley Madison into Singapore. What hypocrisy, I thought back now, about how we need to uphold the values of society when it is so easy to cheat in the first place with the existing system. What Ashley Madison has changed, in fact, was only the prospect of having what we had for so long for free. That's all. It did not threaten any values, any morals because all those were already none existent in the first place. What it truly threatened, was the rice bowl of several people.

I don't know. Maybe there's a good reason to explain this, maybe there's none. It's not up for me to judge anyway. My morals are my morals alone, and it doesn't belong to anyone. I just cringe at the possibility that someone I know may just be in this sector. It's a dark corner indeed, one of desperation, secrecy and lust. I think I'll walk away, for now.