What's the easiest way to introduce a bad guy in a movie? By going along the lines of something like how very long ago, there's this threat to the world (universe) that seeks to destroy everything but because of someone or something, was soundly defeated (but not killed) and was banished/escaped to some god forsaken place. And now, because of an event that only takes place once every few thousand years, this evil entity is now back and it's now up to our hero to stop this evil from taking over the world (universe).

The first Thor movie was something like that. The second Thor (The Dark World) movie is exactly like this. 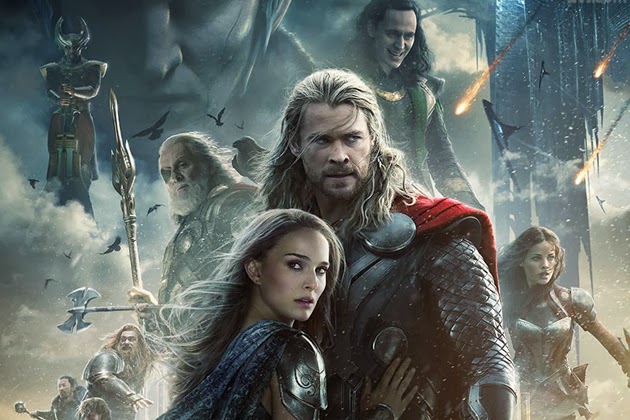 If anything, Thor: The Dark World is a movie of convenient loopholes and plot twists if you ask me. Things just so happen to suit the storyline despite how improbable it seems but if you can ignore the minor logic faux passes here and there, it's not entirely a bad movie. Epic battles, cool CGI effect and Loki's antics are more than enough to sustain the entire movie right through the end. And yes, Loki.

No offense to Chris Hemsworth and his abs, but I think the main pull of the movie was Loki played by Tom Hiddleston itself. While other characters intentions and thinking can be read as plain as a book, one can never guess what Loki is plotting. You know he's evil, but you can never guess what's up his sleeve and what his motives are until the very final moment and it hits you like BAM when it comes out. I think it's more interesting that way because it adds layers to the characters rather than the one dimensional personality portrayed by almost all the characters in the movie.

Of course speaking of loopholes, I have many. If you're not a fan of spoilers you might want to skip to the end paragraph now to avoid spoiling yourself.

1. Jane Foster and the Aether: Out of the countless places Jane Foster can end up in, she end up in the place where they keep the Aether? Seriously? Wasn't there anyone or anything to guard the place? No security measures at all? And just so happen she sucked the Aether up?

2. Attack on Asgard: For one of the most advanced civilization in the universe, you guys still fight with swords and shields? And it only takes one ship to put your capital into chaos? Where's your standing army? Don't you have any more advanced air units at all besides from the small sampans? I mean you have anti-air turrets so why not bother building a more advanced air unit? And upgrade your arsenal please.

3. Malekith in the palace: Right, out of the dozen of ships shot down by the Asgardians, Malekith just happened to be on the only one that made it through the castle. I mean it would have been a real bummer if the ship gets accidentally caught in the crossfire and exploded.

4. Dark World Exploration: So Odin knows both Loki and Thor are going to the Dark World. And their lives could be in danger. So you don't bother trying to send any reinforcement to ensure that the most dangerous substance doesn't fall into the wrong hands? I mean a few extra soldiers during the battle would have helped other than relying on Thor and Loki completely.

5. Malekith at Earth: Right... so the center point of the 9 realms happened to be at the tiny blue do called Earth again. Not sure if we are lucky to to be in the center of so many conflicts and points of interest or not.

6. Attack on Greenwich: An alien spaceship threatens to destroy Earth and we only send 2 fighter jets? Don't tell me humans have given up on defending Earth itself and let the heroes do it. Where's SHIELD?

Of course, there are tons of other little things in the movie that don't quite add up. But at the end of the day, perhaps the movie is just crafted out in a way that should be enjoyed without thinking. Yes don't think nor question and you will find the movie quite alright.