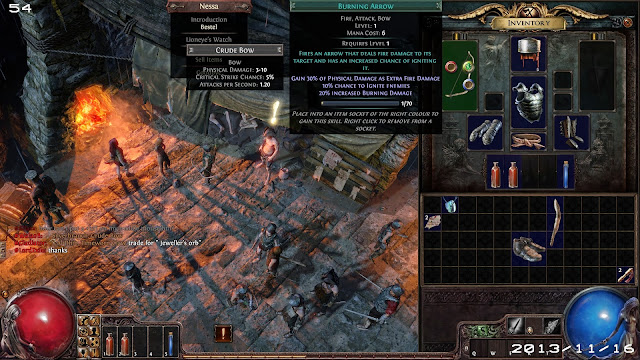 “The response for the Closed Beta was exceptional,” shared Jason Ng, Director of Strategic Partnership at Garena, adding that “We gave out many more Closed Beta keys than expected, and many gamers have been hankering to know when they will be able to get  their hands on Path of Exile as well. With the upcoming Open Beta, everyone will have the chance to experience this exceptional game.”

Chris Wilson, Managing Director of Grinding Gear Games, commented that "We're extremely pleased with the reception to Path of Exile's Singapore and Malaysia Closed Beta test. It has been great getting feedback from this new community and we're looking forward to seeing a similar level of success in the Open Beta."

The Path of Exile Open Beta will be accessible to players via the Garena+ platform on 21 November 2013, 12 noon. Players who have participated in the Closed Beta and reached level 15 and above will have a Garemon (a specially designed pet) credited to their accountsduring the Open Beta. An announcement will be made on the official Path of Exile website once crediting is complete.

Garena has also announced that the Open Beta will continue into the full live release without any data wipes, meaning all progress made by players in the Open Beta will be permanent. Path of Exile is a free-to-play competitive online action role-playing PC game set in a dark fantasy world. Offering intense real time combat, deep character customization options and extensive Player-versus-Player elements, Path of Exile has received universal acclaim fromcritics and players alike.

The game was brought to Asian players in a licensing partnership between Grinding Gear Games, an independent online game developer and publisher, with Garena, a leading publisher of premium online games and developer of Garena+, the largest social gaming platform in Southeast Asia and Taiwan.

For more information about Path of Exile, please visit the official website at http://poe.garena.com.

Lukey's note: I managed to play the game for a while during the closed beta, and had wanted to write about it but due to my word count deadline I had to focus on my little novel first before starting on this. Maybe after open beta! It's quite a fun game though