Special ID aspires to be one of the great Hong Kong undercover police movies. Something like Infernal Affairs or the one starring Laughing Gor. But even with Donnie Yen at its helm and the pretty Jing Tian as the eye candy, the movie failed miserably at impressing, or even getting me interested. 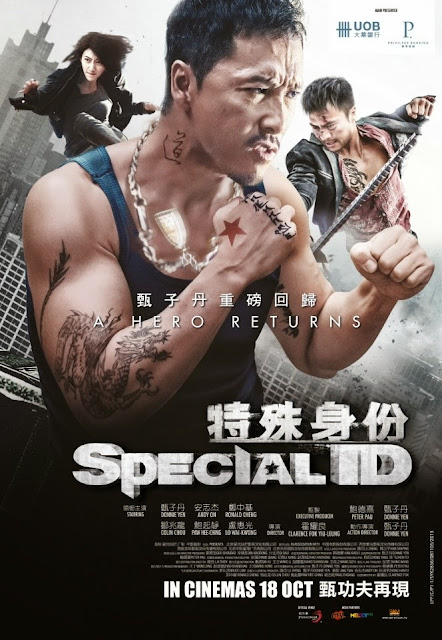 To be honest, I think this whole undercover cop premise has been overused so many times until it just feels old and stale right now. Almost every trick has been pulled in this premise until there's nothing else to be added in anymore. And even with Special ID, the story is same old. Good guy becomes cop, good guy is sent undercover, good guy wants to become cop back but cannot because there's this one big final mission that he has to accomplish. One can almost predict what is going to happen in the film already.

Not only that, Special ID reeks of plot holes. If it's a pathway and you're walking on it, you'll never know when you'll step into one of the many holes on the path and be stuck there feeling confused on how you got there in the first place. That's Special ID. The story jumps here and there without a solid plot to tie everything together. I can't even to begin to pin the faults of the movie, I don't even understand the motives of the main character himself.

Even the action scenes, which one would expect to be good because there's Donnie Yen in it, is nothing more than grown man hugging each other hoping that the opponent would collapse from the overpowering smell of the person's body odour. I'm serious. At least about the hugging part. I don't know who choreographed the fights, but even if Donnie Yen did, it's a major disappointment from what Ip Man had to offer. Sure I mean gangsters fight in such way, but for goodness sake, it's a movie and if I wanted to see people fight awkwardly, I would have gone to Youtube.

The movie is definitely not worth watching. Aside from some nice cinematography here and there, you'll find nothing else good in the movie. Maybe Donnie Yen's tattoos. That's all.