"Oh , how has your work been? I heard ABC's son is already earning 10k a month!"

"Have you found a girlfriend? Your cousin has already married America's next top model you know?"

Like that annoying aunt, jealously can either be outright annoying or in worse cases, harmful in how you see yourself. Nothing saps your self-esteem away faster than a case of jealousy. It will go on and on about how you cannot measure to others, how inadequate you are and how small you are when compared to others. 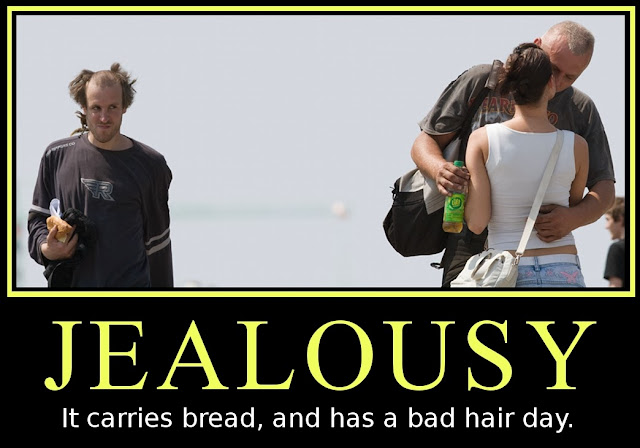 But because she's your auntie, you cannot punch her in the face not matter how much you fee like it. You cannot shove her aside and ask her to shut up to avoid her rants. Maybe you can, but your mum wouldn't like it. You have to sit there and endure what she has to throw to you, trying to put on the most polite face possible. Some of us have louder aunts while others are luckier in that their aunts don't compare that much.

In a way jealousy works in pretty much the same way as the aunt. Only that unlike your aunt, it hangs around you day and night. And if you let its comments get to you, chances are you will feel very sucky indeed. I mean, what's the point of living on and fighting so hard when others could get what you want using much less effort than you?

But then again, like your aunt, this jealousy doesn't understand you as well as you understand yourself. Yes sure that guy may have a pretty girlfriend and at first glance might be way happier than you, but underneath all that, are you that unhappy without one? Or will you really be happier with a girlfriend around? Jealousy doesn't know that. It only knows that what others have that you don't should make you sad, which is often not the case.

So be sure of yourself. It's good to know what others have to give you something to strive for, but never let the comments affect your self-worth in any way. Because only you understand yourself.

Somehow this most is more of me trying to console myself than to motivate others. Shucks.