A lot of noise has been made about Ashley Madison coming to Singapore. But instead of being angry with Ashley Madison, instead of trying a top-down approach by asking the government to ban the site itself, we should show the site that we can equally put it out of business without any governmental means because ultimately, the action needs to come from us, the normal people. Without the demand, there would not be any supply of it. Society itself needs to show that marriage itself is still sacred without having an institution or law to protect it. 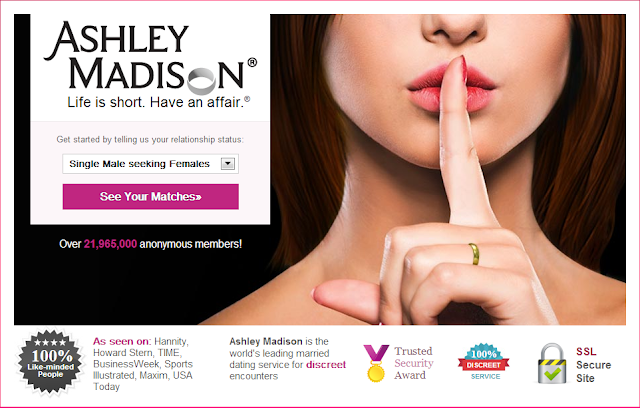 But to be honest, with operations in more than 30 countries already, I doubt we as the society will be able to prove the people behind Ashley Madison wrong about their assumptions. After all, casual sex itself has grown in dominance and the concept of marriage itself has deteriorated over the years so I guess a casual sex website for married people is just waiting to happen. Unless a law is enacted to list adultery as a crime, like stealing or raping, we cannot do anything about it.

After all, societies need law to function. I guess the question now is how serious we want to view adultery or marriage as. Whether do we stick to marriage as the union between two people (one with many) without any interference of outsider or whether we want to abolish the idea of marriage altogether and revert to sort of an animal kingdom like of rule, where the leader can have sex with as many members as the leader wants. Of course, in that way, the penguins would be more civilized than us.

I don't know. While some religions itself like Christianity clearly states the rule of marriage outright, science isn't as forthcoming. I would wonder if society itself would be able function without marriage as a construct for reproductive purposes. Maybe with outside means, but who knows. What I do know is that with sites like Ashley Madison encouraging marriage infidelity and adultery not being a taboo anymore, a very big can of worms is being opened.

My stand is that the entire thing is stupid, to be honest. At least the tag line is. No matter what you think, when to people decide to live with each other, they make a conscious decision to only be with each other. If you're going to be promiscuous, why marry in the first place? What would your kids think? Even if your wife agrees, what's the point of marrying then? Why sign a pointless paper to say you're bonded to each other if you cannot commit to a simple act of responsibility? I don't know. The world today is making it way too easy for idiots to thrive.