Why Can't We All Be Friends

There is a war waged among us humans. On the surface, it seems like the war for the ultimate truth. A question that puts the purpose of our existence on the edge. It was not always like this though, there used to be only one truth, just different versions of it. But the dawn of science and technology seemed to cast doubt into everything that humans had believed for more than hundreds of years. The question that I’m referring to is this: Whether God or a supernatural higher being exists? One that created the world and oversees or governs it through some direct or indirect way in a day to day basis.

And yes the war now is constantly being fought between the atheists and believers, who for the sake of making this post livelier, shall be called the United Atheist League (UAL) and the Allied Believers Congress (ABC). 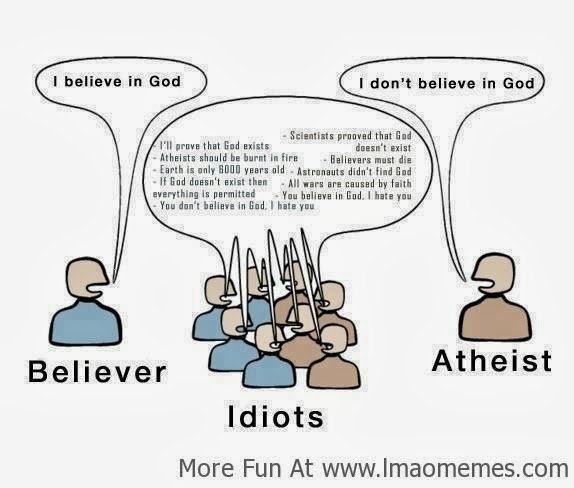 So yesterday I was wandering around Facebook when an article with an interesting headline grabbed my attention: “Why aren’t more intellectuals believers?” or “Why aren’t more believers intellectuals?” or something like that. Basically the whole crux of the article is centered on the phenomena where supposingly smarter people (which is defined according to IQ according to the article) seemed to be more likely to not believe in the existence of a higher being and called for the return of the church to the realm of scientific inquiry rather than just blatant denial of science itself. One classic example I could think of is how proponents of the church are choosing to believe in the theory of creationism instead of evolution, even though the theory of evolution has been healthily proven by the scientific community.

This is not the first time it has happened though. In the past the church has condemned many other people like the guy who discovered that the earth revolves around the sun, which sparked a lot of debate. How would you trust a god who discourages you from seeking the truth and from asking tough questions? One that asks you to listen to whatever He says and do not question it

Sadly, this is exactly what is happening today. With the science and technology going forward at a rate that is faster than ever before, it would seem as if only the Church and the religious seemed to be standing their ground and refusing to budge, sometimes even taking a step backward in the process. Aside from the apologetics, whom I deeply admire, the majority of us seem to be sidestepping tough questions when it comes to our faith. Or we would turn all defensive and aggressive when we sense a threat coming.

But then again, the atheists don't seem to fare better though, most of the time. If there's one thing both camps share, it's how we view each other. The bad feeling goes both ways, in that both people think that they know the truth and that their belief is the superior one, so the other people in the other camp are the stupid ones instead for not being able to accept the "truth". But whose truth is it really?

It's sad to see how low we would stoop down sometimes just to ridicule those who do not share the same beliefs as us. I am not saying that everyone is like that but enough of us are. Just take a look at some internet comment sections and you can see the animosity between us. Even the Facebook post I shared garnered a debate too, surprisingly.

Looking at all this makes me wonder, are we in fact searching for the truth as we say we are, or do we already have an answer before we even begin? The entire debate reminds of this comic I read about having questions versus answers and from the look of it, a lot of us start out our argument already with an answer. I don't care what points you are bringing into this debate because I am already dead set with the viewpoint I am going to give. My viewpoint is the definite answer itself and no matter what you say, I have already believed that my answer is right.

More often than not, instead of going in with a question, we often go in with an answer, already believing what we want to believe. And sadly, Christians and the religious are guilty of this more often that not.

"Oh, you have a question? That's dangerous! It's irrelevant! Why do you still question when we already have an answer? Ain't this answer good enough for you?"

And holding on to that answer itself without willing to budge is the exact reason this debate can never over and why the animosity will continue. So I was thinking, why can't we just put aside our different answers instead and embrace the same question that we all share? That we all are looking for a universal truth about our life an existence? Why are we not prepared to accept that sometimes what we belief may be wrong, even if it's just a little part of it?

Somehow, it's the fear that we may be wrong and that others may be right that causes us to be so stubborn. That we are willing to kill and to defame just because we want to be right and protect our "answers" when we all started with the same question. Why can't we just be friends?