I've been running alone with only my songs for quite some time, and I've always wondered what it feels like to actually know your time and distance by the end of the run, so you can strive to improve or to push yourself further. Or to show off on Facebook that you actually do exercise.

So when I saw Runkeeper being featured on Google Play, I immediately downloaded it, just to try it out. From my first impression of it, I have to say that the app was actually pretty good from my perspective. It tracks your progress through GPS, noting down the distance that you have ran as well as your route and time.

I was initially worried about the app sucking my battery life dry as it relies heavily on GPS but even after more than an hour run, my phone still had around 30% battery life remaining from 80. And that was with my music player playing too, which I admit surprised me quite a little, because my phone has this uncanny ability to go flat within half a day.

Other than that, the app also gives you timely updates throughout your run about your distance, time and speed through voice, so you kinda need your headphones on to hear them. The default time is set at an interval of every 5 minutes and it kinda help you keep track of your time and distance though I sometimes find it annoying because it interrupts my song. But the update was a way for me to see whether I was slowing down or picking up the pace.

But the feature that I liked most was the accuracy and the system that helps you track your progress itself. Even though I took routes that did not appear on Google maps, the Runkeeper was still able to track down my exact path and not only that, it also allows you to review your routes and plan for your next run on its website. Sort of like a post-run debriefing session if you ask me. It was even able to track the elevation that one experiences during the run. The app also allows you to pause your run anytime, in case you get stuck at a traffic light or something, so it doesn't mess up your timing. 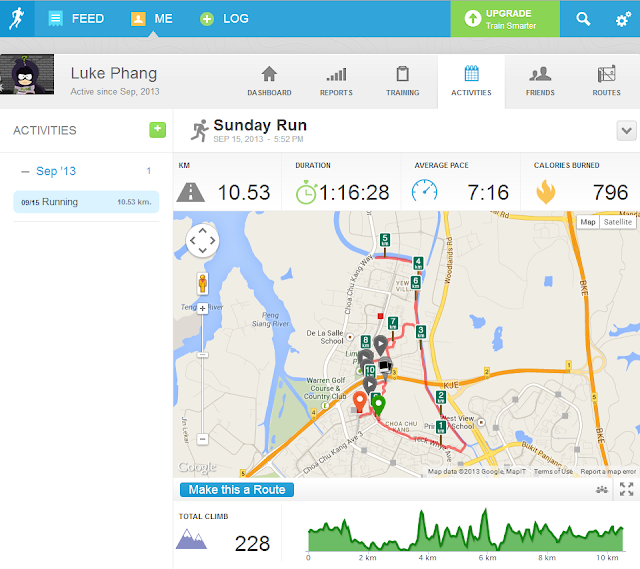 Of course, if you're in the mood to share, you can also link your app with your Facebook and Twitter profiles so you can brag off in social media, which was exactly what I did. And if you have any friends using the app too, you can add them as friends so you call can run together or something, like comparing progress to see who's the better runner.

Last but not least, Runkeeper also has this option to let you use the elite account to unlock more features of the app like calories tracking and workout plan but I'm fine with the free account so far. It's already able to do many things that normally I can't. Next target: 20km!