You would be forgiven if your first impression of Hugh Jackman's latest film is gonna be something like Liam Nelson's film Taken, where the father goes completely badass when his daughter got kidnapped. Because that's exactly my first impression when I saw the poster. But it's not. 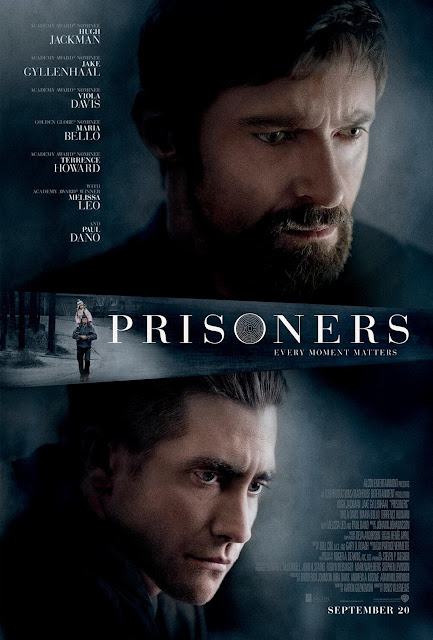 It's been a while since I last watched a good psychological thriller and Prisoners is just that. Watching it was like reading a good mystery novel itself, the suspense bothers you so much that you just want to search the storyline of the story and be done with it. Which I sort of attempted halfway through the movie and thankfully the movie is still new so Wikipedia has not yet updated the full summary of the movie or else I would have spoiled the story myself . That would have been a real bummer.

Aside from the seemingly slow pace sometimes and the sort of long movie timing (2 1/2 hours), I loved the movie, particularly the acting itself. Good psychological thrillers depends a lot on the ability of the cast to make the audience feel their struggles and Hugh Jackman and Jake Gyllenhaal did an impressive job with that. Different men, different struggles but you feel their struggles nonetheless. One man from losing his daughter while the other trying to uphold the law.

The movie also explores the interesting theme of how far you would go in order to get back what you want in a convincingly scary manner, and I can't help but find myself debating about the actions I would have taken if I was caught in the father's shoes myself. There's no clear cut right or wrong answers in the movie and it's made in such a way to challenge your values and your definition between right or wrong.

But the thing I love most would be the twist itself and how no loose ends were left untouched in the film. Every single detail in the film was linked and by the end of the movie, I was quite mindblown by how the film turned out in the end. One could not discuss the implication of the film without going into details so here's a spoiler alert. Skip the next few paragraphs unless you want to be spoiled.

To be honest, I find the "We are waging a war against God" to be a totally OMG-that-is-so-Satanic kind of reason to be used by the killer itself. Subtle hints at religion and spirituality eh? But then again I honestly like it because that is what this film is about right? Exploring the boundaries between humanity and savagery. The line where she said they kidnap children to make parents lose hope so they would turn to demons like the father? Totally chilling. Especially when you realize that everything that she said was true. The way Hugh Jackman treated the kid, totally brutal man.

And the worse part is when you realize that the torture itself was not entirely unjustifiable. The kid did knew something and when you are convinced that he holds the answer to everything you hold dear, would you not go to drastic actions? Are you able to sit back and do absolutely nothing while ignoring the fact that the less time you spend doing something, the greater the likelihood that all hope will be lost? It just so happens that the kid was caught between something that he did not understand and did all the wrong moves (ie singing the song).

Of course, I also loved how the movie tried to add a balancing factor, the "angel" sort of in the movie in the form of Joy's parents. Although they still participated in the horrific acts of torturing the poor kid, you could clearly see that they thought it was wrong. Which deepens the impact of the entire debate itself.

And the way they revealed the real killer and how everything was linked, including to the priest? PRICELESS. I was like OMGWTFBBQ the moment I caught the depth of the entire conspiracy itself.

All in all, I would think that Prisoners is a superb movie. It's not surprising considering the amount of big names and Oscar nominees they have in the team and I just love how the movie kept me sitting at the edge of the seat and fidgeting throughout, hoping for god damned ending to the movie. But it was good. It really was.